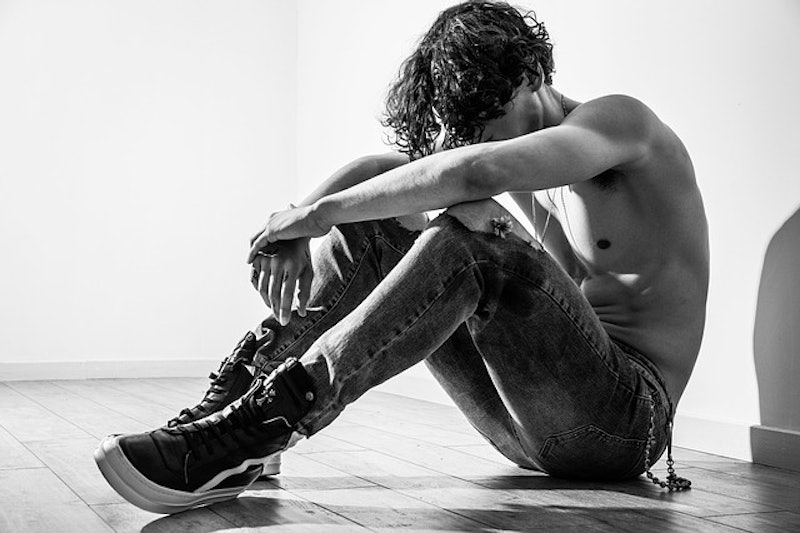 If your partner is always exhausted, angry and rolling their eyes, there's a good chance they have given up on your relationship. These behaviors are often signs that one half of a couple feels disgruntled and "over" a romance. That's according to Dr. Paul Hokemeyer, a licensed marriage and family therapist based in Manhattan and Malibu. He doesn't mince his words: "Being around someone you're over is frustrating," he says. If your boo is flouncing around the house sighing and taking frequent stress naps, that's obviously not a particularly good sign.

Dr. Paul revealed 10 red flags that are indicative of the very real possibility that your partner is halfway out the door. Does she always forget your birthday? Is he always reluctant to grab the check at dinner's end? Does she breeze right through your forgotten anniversary without a second glance, as though it were just another Monday in June? These 10 super passive-aggressive, negative behaviors are all pretty awful. If you can only check one or two off on the list, all is probably well (though your partner may have some crappy tendencies). But if most of these sound familiar, Dr. Paul says beware: Your partner is likely done with the relationship, or at least very strongly considering an exit strategy.

1. They Sigh Around You Often

Lots of sighs are a sign of frustration, Dr. Paul says. In this case, your partner wants "out" of your relationship — but they are still around. This can lead to feelings of deep vexation and annoyance. "Sighs are physical manifestations of that frustration" one feels when they are biding their time in a relationship — halfway in and halfway out.

Does your partner come home from work and go straight to the couch for a nap? Or do they reschedule bedtime for earlier and earlier in the evening? "Being around someone you're over is also draining," Dr. Paul says. "It takes a lot of energy to maintain appearances. It's often better to sleep than deal with the end of a relationship." Lots of sleep can also be an indication of depression, so don't panic if your love is asleep more than they are awake — but if they're exhibiting symptoms of depression, ask them if they need help.

Calling money "an energy that frequently symbolizes love," Dr. Paul says that it's a good idea to look at one's finances if you're wondering if things are going south in your relationship. "You can frequently look at money usage to track the level of love that exists in a relationship," he says. "When emotions are generously flowing, the partners are also loose and generous on their spending on one another. But when the emotions begin to ebb, the receding partner doesn't feel as financially generous. They begin to simultaneously withhold their emotions and their money." This is a less money, mo' problems situation.

4. They Are Quick To Anger

"Love is blind. Friendship [is] forgiving, and apathy [is] impatient," Dr. Paul says. "Impatience leads to anger, and anger forces a division in the relationship. When a partner can't say what they need to, they act out in angry and explosive ways." Plus, he says, anger "forces couples apart when they can't bring themselves to break things off." Instead, they fight. And fight. And fight.

5. They Roll Their Eyes A Lot

If your partner is acting like a teenager, take heed. (Also, that's really annoying.) "This is in line with the apathy, impatience, and frustration responses," says Dr. Paul. "Eye rolling is an automatic response to frustration and apathy. Our bodies take over when we don't articulate what's happening with our emotions."

6. They Physically Recoil When You Touch Them

Calling it "another automatic response to an unarticulated emotion," Dr. Paul points to the reaction of a physical recoil when you touch your partner in "loving, nonsexual ways" as being a huge red flag for the end of a relationship. "The sex can still be great (angry breakup sex usually is), but this recoil is in response to the more nurturing signs of affection — things like hand-holding, shoulder rubs, adjusting their clothes, and facial caresses." If you notice that your partner tenses up ever so slightly when you try to hold their hand or nuzzle their shoulder, this is a definite mark of a deeper issue.

Is your partner useless when it comes to birthdays, anniversaries, and other significant dates in your life? "This is symbolic, and not accidental," says Dr. Paul. "When they forget your important dates, it's a sign that they want to forget you." Harsh — but real talk. We're all forgetful, but we remember what's most important to us.

8. They Hate On Your Friends

"The notion of displaced anger is one that constantly pops up in relationships that are on the rocks," says Dr. Paul. "It's a phenomenon that describes anger that can't be properly placed." Instead, he says, your partner might "diss" someone else — your pals, your family — deflecting the real source of their hostility. "If they are constantly angry at your friends, chances are they are really angry with you," he says.

9. They're Careless With Your Stuff

It's not cool if your partner always balls up your clean laundry and throws it in a pile, often breaks your things "accidentally," or can't seem to be bothered to refrain from ruining every book of yours they read. "Our stuff is an extension of us," says Dr. Paul. "When someone treats our stuff badly, it's an indication that they don't feel we are worth respecting."

10. You Feel Dread When You're Around Them

This one may seem obvious, but for various reasons (often because we just straight-up don't want to deal), we often ignore the most blatant signs of strife in a relationship. "We humans are highly intuitive," Dr. Paul says. "We are built to sense when things aren't quite right. When your lover begins to withdraw, you'll feel it." Pay attention. If you see something, say something. Don't wait until it's too late to come back from the brink.

More like this
The 19 Best Tweets & Memes About Bisexual Awareness Week
By Lexi Inks
Why A Libra & Libra Couple Might Become Codependent
By Kristine Fellizar
These 4 Signs Are The Seductive Sirens Of The Zodiac
By Brittany Beringer
Breeding Kinks Have Been On The Rise Since Roe V. Wade Got Overturned
By Lexi Inks
Get Even More From Bustle — Sign Up For The Newsletter