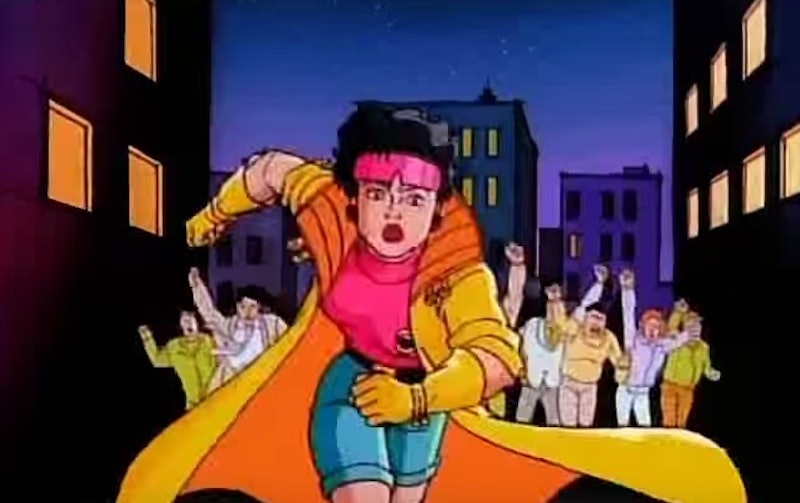 I honestly feel sorry for kids today. Sure, they've got SpongeBob SquarePants and Adventure Time, but in the '90s every channel was full of amazing cartoons, and, if your mom even suggested going outside before noon on Saturdays, it was an actual tragedy. In the '90s, Saturday morning was for cartoons like Rugrats, X-Men the Animated Series, and Aaahh!!! Real Monsters. When there were so many amazing writers and animators churning out top notch animated entertainment, how could any kid resist the lure of Froot Loops and Nickelodeon?

There was a cartoon for every appetite. Superheroes were plentiful back in the day, but there were also the more hard-hitting realistic offerings like Hey, Arnold! and mysteries like Where Is Carmen Sandiego?. I like to think programmers understood '90s children would grow up with superb taste in entertainment, but the truth is I watched them all, so I wasn't exactly a discerning viewer. I am going to narrow my list down to 11 shows though, because I feel like if you never spent a Saturday morning fighting your dad for the remote control to watch these masterpieces then you need to turn in your '90s kid card immediately.

The '90s generation is the meta generation because of Animaniacs. Every Saturday morning our young, impressionable brains absorbed a mix of pure, unadulterated hilarity and self-referential goodness as the Warner brothers and their sister Dot ran amok in the Warner Bros. back lot. As much fun as the truly insane siblings were, it was Pinky and The Brain that stood out. "What are we going to do tonight, Brain?"/"The same thing we do every night, Pinky. Try and take over the world!" is basically my generation's bat signal.

My obsession with the X-Men cartoon still runs deep. Yes, Hugh Jackman is awesome, but you simply have not truly met the X-Men until you've watched this cartoon. I spent every Saturday morning watching the team take down Sentinels, hang out at the school, and tease me with their various romantic entanglements. While I'm sure there were lots of kids invested in the Wolverine/Jean/Cyclops triangle, everyone I knew was all about Rogue and Gambit — I spent many, many hours of my childhood contemplating ways for them to safely make-out and I regret nothing.

Hands down, the best of the Disney cartoons was Recess. The cartoon captured the feeling of being let loose in the wilds of the playground with little adult supervision flawlessly. TJ and his friends were either exactly like you and your friends, or they were the friends you daydreamed about having. As an added bonus, Recess drew inspiration from a ton of classic movies, ensuring movies I had never seen before were eerily familiar when I watched them years later.

Hey, remember that time D.W. freaked out when her snowball disappeared from the refrigerator? Of course you do, because you probably watched the episode again some time in the past year. I know my former college roommate and I weren't the only semi-adult people who rushed home from classes to watch Arthur on PBS because Arthur is enduring. Somehow, the PBS show is still the perfect Saturday morning entertainment after all these years. I blame the combination of books, family stories, and Buster. Only monsters didn't love Buster.

The Powerpuff Girls showed up a little late to the game, but that didn't make the show any less addictive. It was about three little girls who fought crime and were adorable. This show played with gender norms in a way that was progressive and important, but that mostly flew under the radar because Bubbles, Blossom, and Buttercup were so hilarious.

If you were even remotely into spooky stories, then Aaahh!!! Real Monsters was a must. It was one of those shows that every parent hated because they thought it was too "gross" for young and impressionable minds, but it was actually genius. This show is why Monsters University is irrelevant. Nickelodeon did it years ago and way better with Ickis, Oblina, and Krumm.

Goliath was totally your first crush. It's OK to admit it, this is a safe place. Also, in the history of time there has never been an intro more epic than the intro to Gargoyles. That epic voice kept my butt glued to the couch in my PJs more Saturday mornings than I care to count.

Doug taught me everything I needed to know about growing up. For a show about a boy who had a closet full of the same outfit, Doug was delightfully down-to-Earth and relatable. It was the perfect transition cartoon that could be watched from the time you were in elementary school straight through middle school (although you would only admit it to your closest buddies).

I just took you way back, didn't I? Bobby's World is not the first cartoon people think of when they list off '90s faves, but this cartoon was on TV for eight seasons, and it remains one of my earliest TV obsessions. Mixing imagination and reality, Bobby's World took viewers into the mind of a 4-year-old and it was so much fun. It is also probably why you know Howie Mandel, whether you realize it or not.

Every few months, some list will circulate featuring cartoon episodes no one can believe actually existed. One of those episodes is the drunk driving episode of Tiny Toon Adventures, wherein our favorite characters drive off a cliff and die. True '90s kids remember having their Saturday morning ruined by this strange event because they saw it live and then swore off root beer forever.

Rugrats wasn't just my Saturday mornings, it was my childhood. The show was actual perfection, and Chuckie Finster will forever be my life hero.

Anyone else really, really want to watch some cartoons now? I bet Arthur is on somewhere...

More like this
Netflix Reveals First Look At Wednesday In The 'Addams Family' Spinoff Series
By Bustle Editors
Everything To Know About 'Evil' Season 4
By Meguire Hennes
Does 'Locke & Key’s Ending Mean There Could Be A Season 4?
By Sophia Moore
‘The Simpsons’ Will *Finally* Address How They “Predict The Future”
By Sam Ramsden
Get Even More From Bustle — Sign Up For The Newsletter