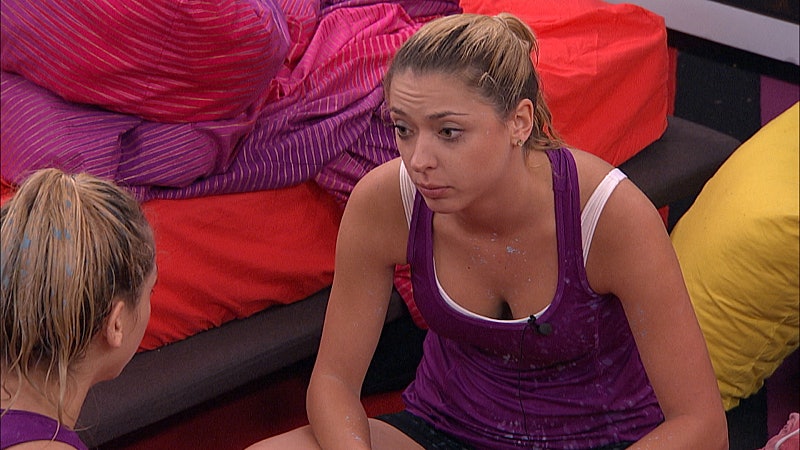 Hickeys. The ever-popular technique among teenagers to mark one's romantic territory. While hickeys are mostly popular with the younger generation, some still enjoy leaving "love bites" as they grow older. Hickeys aren't harmless, they have physical side effects in addition to social side effects. Why am I telling you this? Because Austin gave Liz a hickey on Big Brother 17 and I'm sure there will be repercussions. Liz probably won't suffer any physical side effects, aside from nausea when she thinks back on who gave her a hickey in the Big Brother house. However, her twin sister already seems to be getting sick.

Julia discovered the hickey on the back of Liz's neck and was disgusted and embarrassed for her sister. Liz appeared to not know that she had a hickey, and suspected that it happened in her sleep the night before it was discovered. If that is actually what happened, it would not be at all surprising, given how jealous and paranoid Austin gets of other men. However, that also would not be OK. At all.

Another interesting aspect of the hickey is the location. It's on the back of Liz's neck, towards the ride side of her body. That angle of hickey looks like it must have occurred while the two were spooning (Liz as the little spoon, of course), or if it did occur during a makeout session, Liz's head and neck was at a very uncomfortable angle for an extended period of time. The latter theory is unlikely as the hickey would not have been a surprise to Liz had it just happened "in the heat of the moment." Later, Liz told her sister that when it did happen, she wasn't aware Austin was leaving a hickey on her neck.

In many instances, a hickey can be a cute accident that has to be covered up for a few days at risk of being embarrassed around the office. However, this hickey seems to fit Austin's current goal of making sure that everybody in and outside the house knows that Liz is "his girl." Hopefully, Austin gets evicted soon so Liz won't have to deal with him, and we won't have to watch this uncomfortable mess of a showmance.

More like this
This 'Big Brother' Legend Is Tipped To Host The ITV2 Reboot
By El Hunt, Maxine Harrison and Sam Ramsden
Twitter Is In Meltdown Over The Confirmed Return Of 'Big Brother'
By Sophie McEvoy
Everything To Know About The HBO Max & Discovery+ Streaming Service Merger
By Brad Witter
Pete Davidson Runs To Shower With Kim K In 'The Kardashians' Season 2 Trailer
By Jake Viswanath
Get Even More From Bustle — Sign Up For The Newsletter