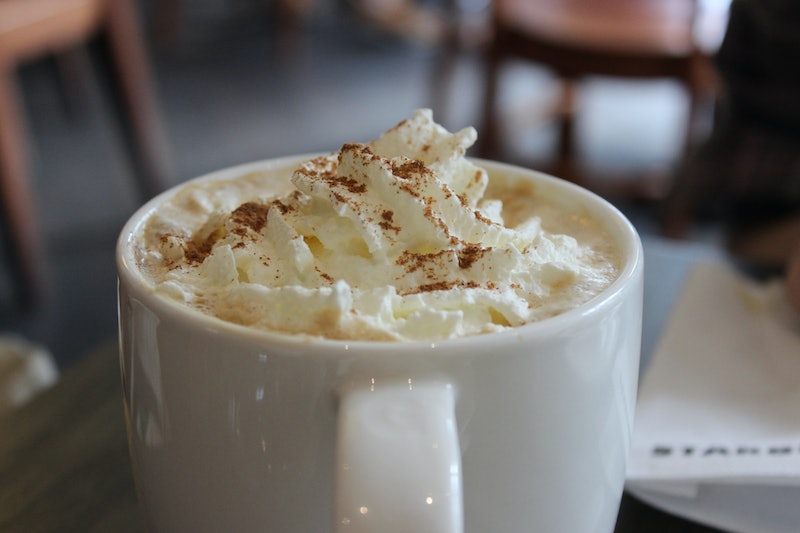 There are so many things to love about fall. Chunky sweaters, football season, that crisp edge to the air, and, of course, Starbucks' pumpkin spice latte. Even though fall is a ways away, fans of this seasonal beverage are eager to get their hands on that warm and comforting cup of deliciousness. When will pumpkin spice lattes be back at Starbucks? Unfortunately, the coffee chain hasn't released an exact date, but you're still in luck, PSL aficionados, because all signs point to soon. Update: Starbucks says the pumpkin spice latte's official release date is Sept. 8.

The major coffee chain usually stays pretty mum on the release of this cult favorite drink. Over the past few years, however, it has given early access to the drink's most loyal fans. One can only hope that they plan to do the same thing this time around.

But how does one get early access to the PSL? Last year, Starbucks launched @TheRealPSL Twitter account, which tweeted daily clues from Aug. 21 through Aug. 25. Followers then used their detective skills (and help from other PSL lovers) to work through the riddles. Fans also relied on a separate Tumblr board, which also kept track of the solved clues. Then, after the final challenge was completed, Starbucks released a password for early access.

No doubt, PSL loyals sprinted to their local Starbucks, password in hand, and whispered the sacred word into the barista's ear. In doing so, they "unlocked" the beverage early for all visitors to that location. One can only assume this person was deemed the local hero of their community, and was recognized with a sign in the store and possibly a parade. There's nothing better than pumpkin spice latte fame.

That all sounds fun, but the question remains: when can you expect to get your pumpkin spice latte this year? Considering Starbucks' special contest launched on Aug. 21 last year, one can only assume the company is aiming for a similar — or even earlier — start date this year.

Starbucks has also dropped several hints via social media. This cryptic tweet from the @TheRealPSL Twitter account on May 23 hinted that we had to wait "three more months and change" for the arrival of the beloved beverage. That would put us right around the end of August.

The official Starbucks Twitter account has added its voice to the conversation as well, with this reply to a PSL hopeful.

Combine all of those clues with Starbucks' typical start date for its fall drinks, and I can only imagine that the PSL — or at the very least, an announcement — will be making us smile ear-to-ear by the end of August.

Hurry up, Starbucks! We're ready for you.