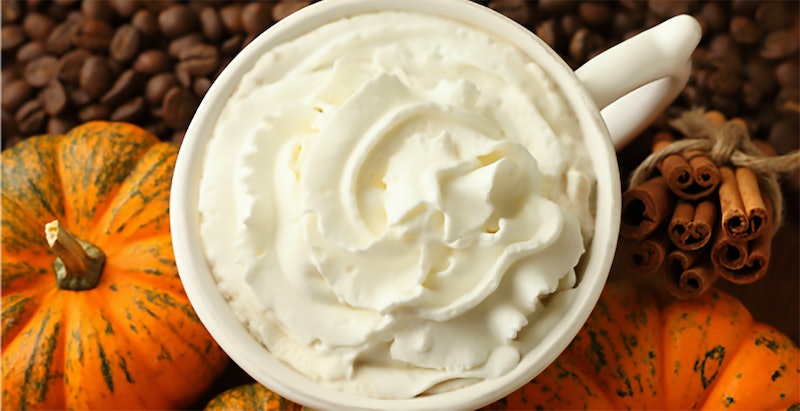 Although we only recently started wondering when the Starbucks Pumpkin Spice Latte will return, we might have something resembling an answer to that most pressing of questions already: Soon — possibly very soon. According to NBC News, who recently spoke to “staff at multiple locations throughout the country,” the Pumpkin Spice Latte might return on Sept. 8 to Starbucks stores nationwide. However, let's all take this moment to remind ourselves that Starbucks hasn't officially announced anything yet. As such, we should take this news for what it is: A rumor, not fact.

If Sept. 8 is the day, I feel marginally OK about it; it's after Labor Day, which is a little on the later side this year anyway (Sept. 7, for the curious), so it's not like we're jumping on summer's coattails or anything. However, NBC News' sources also said that some Starbucks customers may gain access to the coveted beverage as early as Sept. 4. That's before Labor Day, which kind of makes me get a little “NOOOOOOOOOOO!” about the whole thing. I mean, don't get me wrong; I love a PSL as much as the next fall enthusiast. But the early arrival of the PSL means the early arrival of the fall; and if fall arrives earlier, then winter will arrive earlier; and if winter arrives earlier? Well, get ready to start singing Christmas carols in September.

Again, though, both dates are only rumors; Starbucks hasn't made an official announcement about when the Pumpkin Spice Latte will be coming back yet. Bustle reached out for comment, but received no response by press time. (We'll update if more information is forthcoming.)

As for Pumpkin Spice Latte itself? It's remaining coy about the whole thing. In response to a few people who have inquired about it via Twitter, the beverage replied only:

Well, I suppose at least the rumored date is later than it was last year. In 2014, the Pumpkin Spice Latte officially hit on Sept. 2, with an Aug. 25 early access date for some customers — and I don't know about you, but I think that's a smidge premature. If the handful of September days that exist prior to Labor Day are still summer, then August is definitely still summer. I don't even like summer, but I would like to be able to get whatever enjoyment I can out of it before I have to deal with the horrors of a transitional wardrobe.

So let's all cool our cinnamon-powered jets, shall we? The PSL will arrive when it's good and ready to — and not a moment sooner.