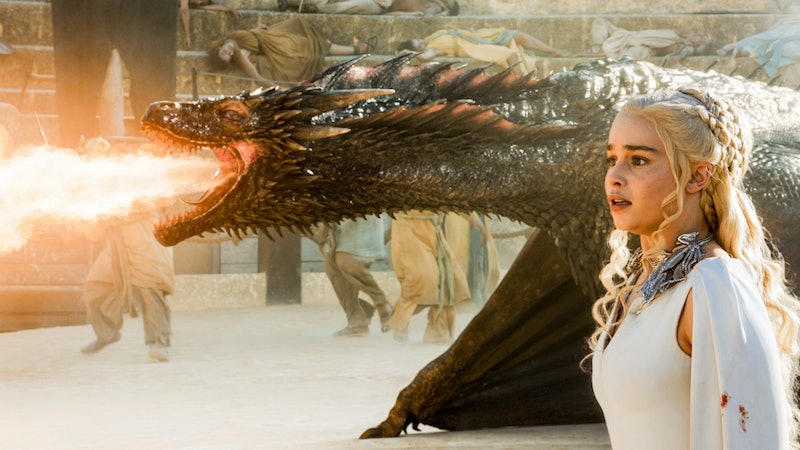 Since I am just now recovering from the end of Mad Men, I don't even want to begin thinking about the series finale of Game of Thrones. Luckily, HBO Programming President Michael Lombardo told Entertainment Weekly that there will be at least three more seasons until we have to say goodbye to Westeros. Despite all of this, this doesn't stop me from thinking about how the show might end. With roughly 30 episodes left to wrap up the series, there is plenty of time for all of my pressing questions to be answered. While A Song of Ice and Fire writer George R.R. Martin looks to release Winds of Winter before the sixth season of the show premieres, he has also been thinking about how the acclaimed series will conclude. Martin talked about how Game of Thrones will end with the Observer, saying it won't be a catastrophe. He stated:

"I haven’t written the ending yet, so I don’t know, but no. That’s certainly not my intent. I’ve said before that the tone of the ending that I’m going for is bittersweet. I mean, it’s no secret that Tolkien has been a huge influence on me, and I love the way he ended Lord of the Rings. It ends with victory, but it’s a bittersweet victory."

Though I take some comfort in knowing that GoT's ending won't be apocalyptic, knowing Martin's penchant for killing off major characters, I highly doubt I will make it through the series finale without shedding a few tears. Considering Lord of the Ring's ending here are six predictions about Game of Thrones conclusion.

Martin and the executives over at HBO didn't bring us this far to leave us without a victor. Someone will succeed in being the leader of the Seven Kingdoms; we just don't know who it will be. While my money is still on Jon Snow (I'm an avid believer in the R+L=J theory and the resurrection theories that come along with it), Daenerys Targaryen or someone from the Lannister clan are still all major contenders at this point. At the end of Lord of the Rings, Aragorn, who is the rightful heir of Arnor and Gondor, is crowned King in an elaborate ceremony. I'm sure Martin has something similar in mind for the victor in GoT.

In Lord of the Rings, Frodo destroys the Ring of Power in the fires of Mount Doom and then sails off to the Undying Lands to heal from his tumultuous adventure and find peace. With the impending war that will surely decimate Westeros, those who live through it will have to take great bounds in order to heal and move forward.

3. Westeros Will Be Forever Changed

Though LOTR's films end on a much happier note, in the novels Frodo and his friends return home to the Shire to find that it's unrecognizable. In the books, their once calm and safe home is overrun with ruffians who are led by the evil wizard Saruman. Whether it's the White Walkers or some other unsavory figures, I'm sure that certain parts of Westeros will be forever lost in the fight for the Iron Throne.

From the pilot episode of Game of Thrones, the audience has been reminded time and time again that winter is coming. Though this is the motto of House Stark, it's also a warning. When this past season finale left Jon Snow bleeding out on the ground, I knew that the worst was yet to come. The White Walkers are already quickly approaching the Wall, and people are dropping like flies in Westeros. Still, if Martin is committed to his "bittersweet" ending, then I cling to the hope that, once everything is said and done, things will be better.

5. The Iron Throne Will Destroyed

All of the conflicts and deaths in Game of Thrones stem from the desire to claim the Iron Throne. The Throne was forged by Aegon, the first Targaryen king, using the swords of the lords who pledged their loyalty to him. In reality, like the Ring of Power in Lord of the Rings, the Iron Throne is just a symbol — one that makes men greedy and hateful. Hopefully, when all is said and done, the Throne will be destroyed, just like the ring in LOTR.

6. Unbreakable Alliances Will Be Made

The thing that makes Lord of the Rings such a sensational series is the fact that unbreakable bonds were formed between men, hobbits, elves, dwarfs, and other creatures of Middle Earth. Since the ring bearers experienced the adventure together, they knew all that had been sacrificed. There is so much fighting between Houses on GoT that, at this point, no one will be able to overpower anyone else. However, once alliances are formed and the war begins, things might looks a bit different.

Though we won't know how Game of Thrones ends until Martin releases his last book, or until the series concludes in 2018, Martin's love of LOTR and how the series has gone thus far let's me know that I need to start preparing myself now.