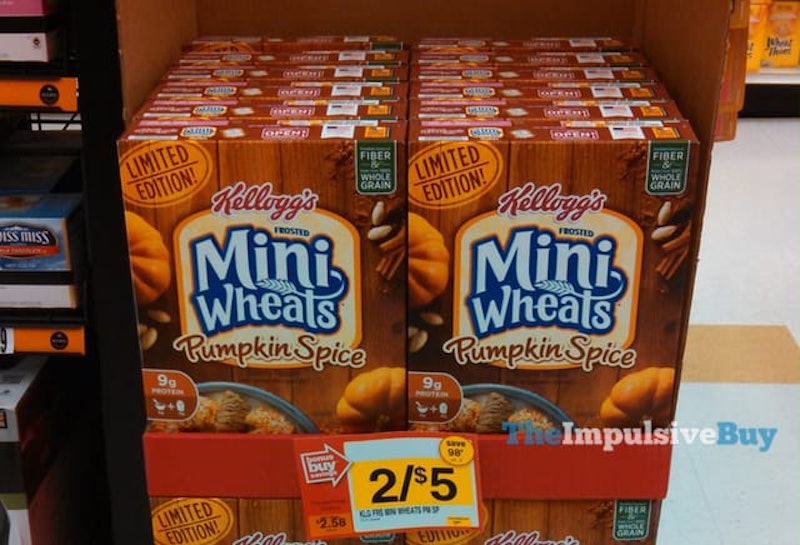 It may still be August, but pumpkin spice fever is already upon us: Pumpkin Spice Frosted Mini-Wheats cereal is a thing now — and to be honest, I'm not sure whether it's the crowning glory of pumpkin spice flavored things, or if it's just really bizarre. Either way, though, our grocery store shelves have previously suffered from a dearth of pumpkin spice cereal, so Kellogg's offering fills a cinnamon- and nutmeg-scented void.

But if you're already running out the door to go get a hold of them yourself, slow your roll: They're not available everywhere yet. According to Refinery29, a spokesperson said that there is no official date yet for a nationwide release of Pumpkin Spice Latte Frosted Mini-Wheats; however, the good news is that we can expect to see it soon. The spokesperson also emphasized that this flavor of Frosted Mini-Wheats is going to be a "limited edition" one, so when it does finally become available, you might want to stock up.

For the curious, here's what this seasonally appropriate breakfast option looks like in all its boxed glory:

While it's entirely possible that this cereal might just end up being the best thing ever to get blasted with sweet and spicey goodness, not every pumpkin spice flavor pairing is the proverbial match made in heaven. I'll be honest: I kind of can't believe these other pumpkin spice foods exist... and yet somehow, they do:

Chobani released a limited batch of pumpkin spice flavor of their famous yogurt last fall. Yea or nay? I suppose that all depends on whether you think Greek yogurt should be sweet or savory.

Yes, you read that correctly: Pumpkin spice potato chips. Pringles released a pumpkin spice flavored version of their chips in 2012... but hey, I suppose at least it isn't any weirder than those Cappuccino Lays chips.

Cedar's offered pumpkin spice hummus for a while, but alas, the product offering has been removed from their website.

Why Country Crock butter? Why?!

You would think that protein powder designed for athletes to put into their smoothies wouldn't even bother trying to create fancy flavors, but you would be very, very wrong. Not only does HIT Supplements Premium Whey Blend come in pumpkin spice flavor, but even more astonishingly, it exists in Carrot Cake and Syrup and Waffles flavors, too.

Blue Diamond Almonds makes a pumpkin spice variety of their flavored nuts, which actually doesn't seem like that bad of an idea in general. The almond factor kind of ruins it for me, though; I'm big on savory almonds, rather than sweet ones. But I think pumpkin spice pecans would be dynamite!

I know that pumpkin spice is great in a latte, but there's something about coffee's flavor that makes me want a sweet aftertaste a lot more than when I'm drinking tea. Maybe that's just me, though.

Cliff makes a spice pumpkin pie flavored energy bar. Apparently it's a good source of fiber, protein, and vital nutrients, so at least there's that.