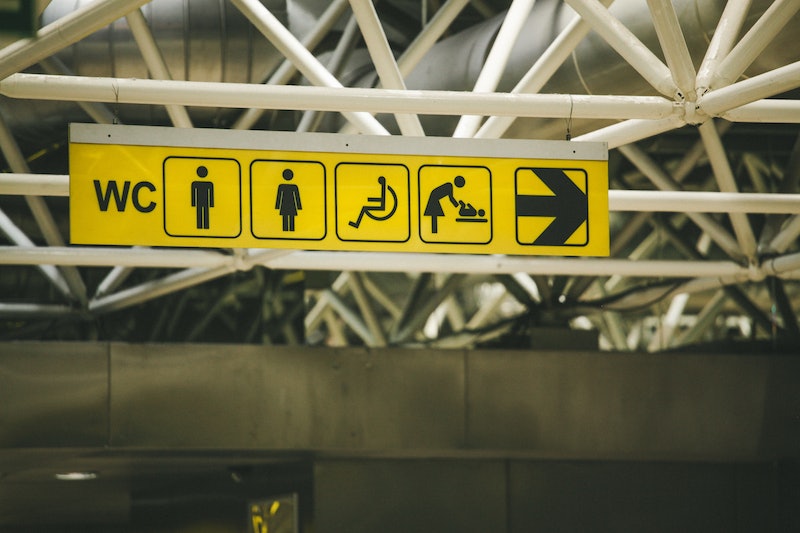 As the classic literary work of the same name once noted, everybody poops — but sometimes, even something as simple as figuring out how to get yourself to poop can be a struggle. I'm not talking about randomly forcing yourself to poop because there's nothing good on TV tonight, of course; rather, I'm referring to the times where you feel the desperate urge to go, but just...can't. Roughly 12 to 19 percent of Americans experience constipation and during these epic fights to drop the kids off at the pool, many of us would give anything to find a way to go (that doesn't involve laxatives or other medicines). And even if you don't experience regular episodes of serious constipation, surely there are times where you wish that you could move things along a little more easily, or with less straining. That's probably how you've ended up reading this, so let's get right to it!

We know that everyone else in the world has already told you to get more fiber and water in your diet if you want to stop getting constipated, and that is great long-term advice! But if you're reading this article (presumably after Googling "how to poop" while in a sweaty, constipated panic), we're long past the point of fiber or water making a difference. Fiber — whether you're getting it from fiber-rich foods or supplements — and water won't typically make an immediate impact on your digestive health, especially if you're already badly constipated. Which, since you're reading an article about how to poop, I am forced to assume that you are. (Hey, a bit of good news: You're already closer to treating the issue!)

Well, you're in luck (OK, not that much luck, as you're still constipated and all, but you're in a little luck). We dove deep (ew) into the world of poop hacks, and came up with these four tips to expedite your next trip to Toilet Town.

I know — that's total poop noob stuff, right? But it's not a coincidence that your morning latte is typically followed by your morning poop break. Coffee has been proven to create an urge to defecate, but despite what urban myths would have you believe, it's not due to the caffeine in it — a 1990 study found that even decaf coffee makes us run for the bathroom/ Port-A-John/ area in the forest that seems mostly densely covered by bushes. The real answer seems to be that there is an element present in coffee that triggers what the researchers tastefully referred to as an "increase in motility index." Coffee isn't bad for you, so throwing back a cup or two when you're trying to go won't hurt.

And what if you hate coffee? Hey, it's cool; you're a total monster, but that's no big deal. Monsters have to poop, too, and we respect that! Though the 1990 study said that drinking hot water made no impact on bowel movements, plenty of other expert and anecdotal evidence supports the idea that hot beverages in general can help you release the kraken. Gastroenterologist Felice Schnoll-Sussman, MD told Runner's World that even drinking hot water "widens blood vessels in the digestive system and helps increase blood flow and GI activity." So even if you hate all things coffee-related, you can still have a morning beverage that helps you, uh, audit your assets.

I can hear you right now: "Massage my taint? Wow, that escalated quickly!" To which I say: do you want to have a tea party where we wear tiaras and nibble on petit fours? Or do you wanna get the poop out of your b-hole, woman? According to a 2014 study published in Journal of General Internal Medicine, gently massaging your perineum — the area of skin between your anus and your vagina or testicles (aka your taint) — is the key to getting your backfield in motion. It might be a little complicated to pull off in, say, your office restroom or the bathroom at Starbucks, but if you really want to go, I think you'll find a way.

If you've ever been beset by the urge to evacuate after a few minutes on the treadmill, you're already well aware of the connection between moving your body and moving your bowels. This is because aerobic exercise increases blood flow throughout your body, including to your gastrointestinal tract. This improved blood flow can increase the strength of your intestinal contractions and then, before you know it, the train is leaving the station. So if you're stopped up, try some brisk walking. If you're feeling ambitious, try a quick jog.

While there's no surefire guarantee that squatting when you poop will help if you're really and truly stuffed up, squatting should at least take some of the strain off your bowels and shave a few seconds off your run time — a 2012 study published in the Journal Of Digestive Health found that people who squatted while pooping were able to, ahem, evacuate their premises in under a minute, while folks who pooped the old-fashioned way needed more than two minutes before they could take a trip to Splash Mountain, so to speak. So if you're trying to speed things along, there are worse things you could do than pop an actual squat.

Of course, this is not all to say that you should run around playing God with your poop. Most of the time, your poop will come out when it is supposed to come out — and you should never strain your bowels or otherwise try to forcefully make yourself poop. But the next time you spend the entire weekend going HAM on some hard cheeses and find that come Monday, your butthole is locked down tighter Fort Knox, make use of some of these gentle poop-related nudges. You can thank us later...you know, after you've washed your hands.