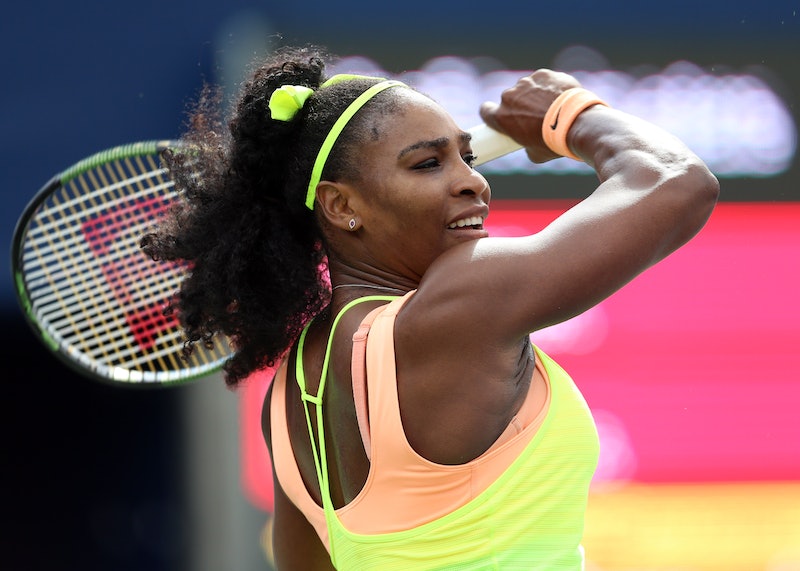 We all know there's a pay gap between men and women and that it sucks, but it might surprise you just how bad the gender pay gap is when it comes to sports. Based on the Forbes ranking of the top 10 best-paid male and female athletes, it's not just that there are millions of dollars in difference between the highest paid male and female athletes, but collectively, the top 10 women make just 13.1 percent of what the top 10 men make. That's so much worse than the overall pay gap — the oft-cited 77 percent statistic, which drops even lower for women of color — it's not even funny.

The fact that female athletes aren't well paid is already pretty common knowledge, but when looking at the Forbes numbers, it seems that the bad news doesn't end there. In fact, when it comes to the numbers for how male and female athletes are paid, there is no shortage of issues, at least based on these new numbers.

From how much athletes are getting to paid who is getting paid, here are a few depressing takeaways.

Given the millions upon millions of dollars that sports players are paid each year, it seems unsurprising that the gender gap would be millions of dollars apart. But knowing that doesn't make it any better to realize that the highest paid male athlete, Floyd Mayweather, made $300 million dollars according to Forbes' 2015 numbers; the highest paid woman in their 2015 estimate, Maria Sharapova, made only $29.7 million. That's a difference of $270.3 million, which is more than what the top 10 women athletes make combined. That is unacceptable.

Where Women Fall In The Total Rankings

In other words, of the 100 best0paid athletes in the world, only two are women. The third highest-paid female athlete, Caroline Wozniacki, makes $14.6 million, more than $4 million less than the 98th highest-paid man.

And The Highest-Paid Athlete In The World Is...

This isn't necessarily a comment on the gender pay gap in sports — but it's still not a great statement on how the sports world views women that the highest-paid athlete of 2015, Mayweather, has been accused multiple times of domestic violence by several different women. He was also convicted on domestic violence charges in 2011.

What this seems to imply is that not only does the sports world apparently not think that women deserve equal pay, but they also don't think that there's anything wrong with paying massive rewards to someone who has been convicted of physically abusing a woman. In case you thought the sports world viewed women as equal in non-financial matters.

Not only is it much harder for women to earn big money in sports, but women of color seem to face an even greater challenge. Of the 10 highest-earning female athletes only one, Serena Williams, is a woman of color. In men's sports, on the other hand, eight of the 10 top earning athletes are men of color or Hispanic. So are women's sports more discriminatory? Well considering the fact that Williams — perhaps the best player, male or female, to ever swing a racquet — actually makes less than Sharapova suggests that there might be some prejudice going on.

The Sports Represented At The Top

If you look at the top 10 best-paid male athletes, you'll notice that athletes from five different sports are represented: boxing, soccer, tennis, basketball, and golf. The most represented sport, basketball, has three athletes in the top 10. In women's sports, on the other hand, seven of the top 10 athletes all play tennis. NASCAR driver Danica Patrick, MMA fighter Ronda Rousey, and golfer Stacy Lewis round out the group.

From this, we see that not only do top-paid female athletes make drastically less than top-paid male athletes, but moreover, most sports don't even seem to provide women with a chance to make even this much money. (In fact, tennis is probably so relatively lucrative for female athletes simply because tennis is one of the few sports in which male and female athletes receive equal prize money.)

And this issue is also tied to that of racial equality as well. If sports with more women of color playing, such as basketball or soccer (at least globally), are less well-paid in women's sports overall, that hurts the earning ability of female athletes of color. And since the most lucrative sport, tennis, often requires a hefty investment in equipment in order to start out, that makes athletically inclined girls from low socio-economic status less likely to pick it up. It's a nasty cycle.

The Athletes Side By Side

But to really put all this in perspective, you can just go ahead and look at the athletes side by side — because you can run the total numbers as much as you want, but sometimes, it's better to put a personal perspective to it. Here are the top 10 earning women, compared to the top 10 earning men, including how much they were paid this year according to Forbes. It's not pretty.

Agnieszka Radwanska earns 12.1 percent of what Kobe Bryant does.

Stacey Lewis earns 12.6 percent of what Tiger Woods does.

Ronda Rousey earns 12.8 percent of what Phil Mickelson does.

Simona Halep earns 13 percent of what Kevin Durant does.

Petra Kvitova earns 11.9 percent of what LeBron James does.

Ana Ivanovic earns 12.4 percent of what Roger Federer does.

Danica Patrick earns 18.8 percent of what Lionel Messi does.

Caroline Wozniacki earns 18.3 percent of what Cristiano Ronaldo does.

Serena Williams earns 15.4 percent of what Manny Pacquiao does.

Maria Sharapova earns 9.9 percent of what Floyd Mayweather does.