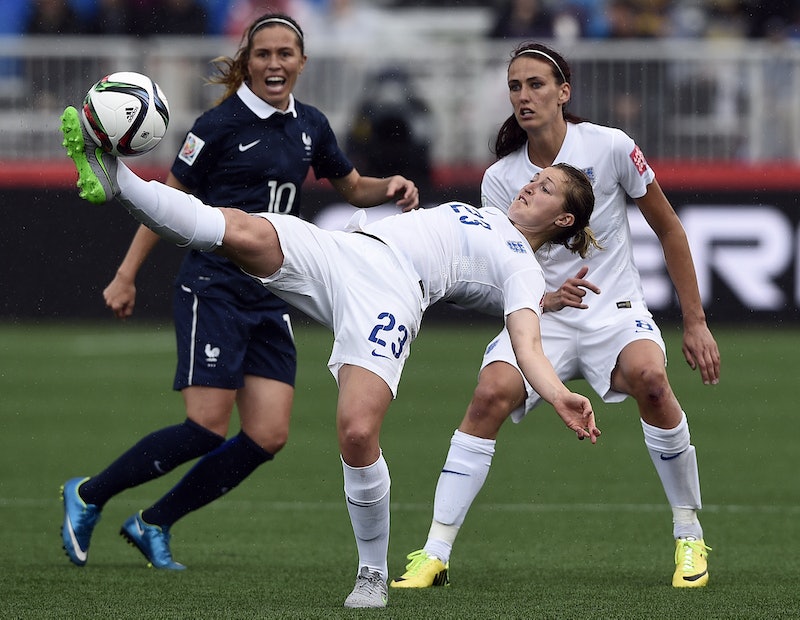 The U.S. women's team is sprinting to the quarterfinal of the FIFA Women's World Cup, and female sports fans everywhere would be celebrating in solidarity — if it weren't for the pesky wage gap that's resulting in huge salary differences for male and female athletes. Though athletes are commonly thought of as some of the richest members of society, the truth is female athletes don't come close to competing with their male counterparts, a wage gap that exists in the rest of the country. The U.S. women's soccer team, for example, is doing so well on the field they may bring home the $15 million prize, which seems pretty substantial... until you compare it to the $358 million prize that went to last year's (male) winners of the FIFA World Cup.

The difference in prize purses isn't surprising when you take into account the average player in the U.S.'s top women's league, the National Women's Soccer League (NWSL), is paid between $6,000 and $30,000, while the top men's league, Major League Soccer (MLS), pays a minimum of $50,000. Prize purses and private endorsements are expected to compensate for some of the lower salaries, but it's incomprehensible that the lowest paid male players are still making $20,000 more than their highest paid female counterparts, without counting endorsements (which are often much more generous for male athletes).

The trend continues, not only in soccer but across all sports in general. The highest paid athletes in any sport are almost always male. In 2015, only two women made Forbes' list of 100 highest paid athletes. Maria Sharapova, tennis player extraordinaire, ranked No. 26, with a total income of $29.7 million. Only $6.7 million came from her salary, and the rest came from private endorsements and business ventures. The only other female was fellow tennis player Serena Williams, who came in at No. 47 with $24.6 million.

It's difficult to look at Sharapova's $29 million and feel sorry for her "lack of income," but then compare her to the highest paid athlete of all time, boxer Floyd Mayweather, who took home $300 million in 2015. Sharapova makes less than half of what the highest paid male tennis player, Roger Federer, makes. Federer came fifth on Forbes' list with $67 million. However, it's not surprising female tennis players are the first to rise to the top, as professional tennis has made efforts to become equal in their pay and treatment of their athletes. In 2007, Wimbledon provided equal prizes to all of their male and female players for the first time in history.

Some of the large wage disparities can be explained away by various business deals, endorsements, and other profitable ventures that athletes invest in. But when you look at a sport like basketball, the stark difference between the wages of male and female athletes is hard to ignore. According to Forbes, the average NBA player makes $4.9 million, and the highest paid NBA player in 2015 was Kobe Bryant, who took home a cool $123.5 million.

There are a multitude of reasons and excuses for the vast differences in wages — lack of interest in female sports, lack of investors, lack of advertisers, low ticket sales — and more have been used to rationalize the way our country treats and dismisses female athletes. But these trends and attitudes start young, and follow women up through their careers.

In colleges, where Title IX requires equal funding for female sports teams, there are still differences. Male students get 55 percent of athletic scholarships, leaving females to fight it out for the remaining 45 percent. Though women on average make up 57 percent of collegiate athletes, they only receive 43 percent of participation opportunities. And unsurprisingly, women's teams receive only 33 percent of recruitment funding.

Athletes are held up as role models and inspirations for children, to get them active, to get them engaged in team activities, to teach them to push themselves harder, and farther, and longer. So what message are we sending young girls, who see they can work hard and fulfill their goals and aspire to be as successful as Jazmine Reeves, who became the 2014 Rookie of the Year for the NWSL's Boston Breakers. But, hopefully, those girls won't have to leave their dreams behind because they won't be able to support themselves on an $11,000 salary.