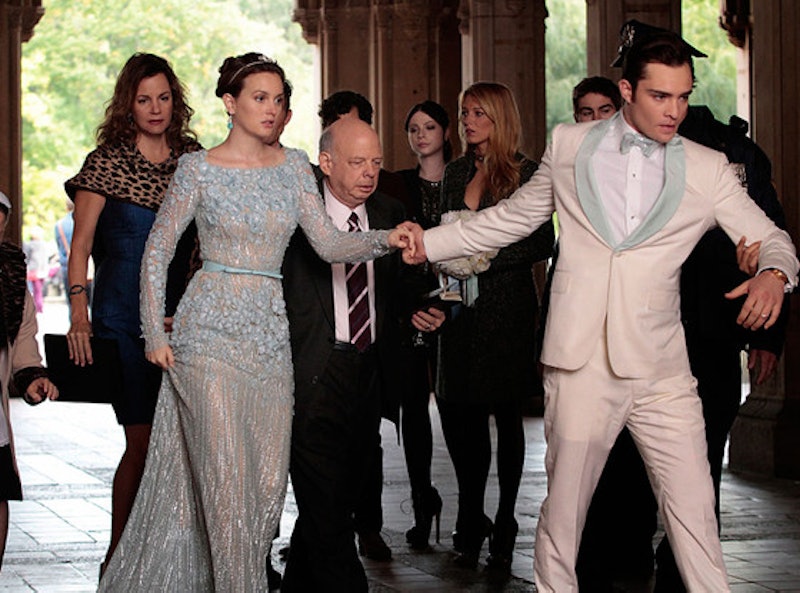 While kids today are emotionally reeling about all the unanswered questions Pretty Little Liars left them with, I'm still solidly stuck in 2012. Yeah, the A reveal was baffling, but can you (spoiler alert) BELIEVE Dan Humphrey was Gossip Girl?! I'll still never get over that. And beyond it, I'll still forever be haunted by so many "What happened when...?" questions that Gossip Girl never truly answered.

"But wait, Mary Grace," you might be saying. "Gossip Girl had a five year flash-forward in the finale, you KNOW what happened to everyone." Oh, you sweet, naïve baby sea otter: Yes, with the series finale, we kind of got the gist of everyone's (life-ruining) endgame, but it's those empty five years in the middle that I'm wondering about. How did this small, quasi-incestuous group of frenemies get emotionally and legally over the fact that one of their own had been puppeteering their lives for the past several years? I'm sorry, bro, but the fact that they're all the veritable worse doesn't cancel out the fact that LIVES WERE RUINED during the course of the show.

So in honor of terribly anticlimactic reveals, here's 26 unanswered questions that the Gossip Girl finale left us with.

1. Did Dan get slapped with a million libel lawsuits?

Or was he able to sidestep that because of some inane "EVERYONE is Gossip Girl" reasoning? I don't know if that's something that would hold up in court.

2. Are all of these kids just immune to the law?

3. He probably got a book deal out of this whole thing, didn't he?

4. So if Jenny knew the entire time, how did she sign off on like 90 percent of Gossip Girl's posts on her?

5. "Hey, Dan, could you publish that blurb about me lying about losing my virginity to my fake boyfriend, that would be great?"

"I feel like becoming a laughingstock should be good for my reputation."

6. That said, why did Dan have to look fake-surprised at Gossip Girl posts that HE was posting, in his room, by himself?

7. How can this show hold anything with that many plot holes?

8. Did Kristen Bell and Rachel Bilson ever get those parts?

9. What EVEN was Vanessa doing?

11. Who was really craving a Vanessa cameo, anyway?

12. Is William Van Der Woodsen REALLY just splitting the difference between Lily's most prominent and most recent terrible husbands?

13. How have Chuck and Blair not divorced like six times already?

14. When did Rufus and Lisa Loeb get together, did they meet on a Tinder for faded '90s musicians?

I mean I remember them both being at that weird VH1 Classics concert at the end of Season 1, but I still find this baffling. The whole finale threw me off because my endgame was always Chuck and Blair, Rufus and Vanessa, and Dan and Grandma CeCe.

15. So did Jenny just forgive Blair for that whole ruining-her-Parsons-interview thing?

16. How are people so day-to-day vindictive also so forgiving?

17. If everyone's so rich, why are they having a wedding in SOMEONE'S HOUSE?

18. And how much do you bet this was spur-of-the-moment?

20. Why is it that Blair's dumbass wedding to Louis was the only thing resembling an actual rich person wedding?

21. Why couldn't Blair get her hair done for that wedding, do you guys remember how horrible it looked?

BLAIR WALDORF WOULD NEVER HAVE SPLIT ENDS ON HER WEDDING DAY.

23. So then did the Gossip Girl site get shut down?

25. Or does Gossip Girl just live in the hearts and spirits of us all?

More like this
How The Thanksgiving Episode Of 'Gossip Girl' Changed Pop Culture History
By Gabrielle Bondi
These 'Criminal Minds' Throwback Photos Show The Cast’s 17-Year Evolution
By Grace Wehniainen
The First Trailer For 'That '90s Show' Includes So Many Nods To The Original Series
By Jack Irvin, Alyssa Lapid and Grace Wehniainen
'Gilmore Girls’ Lauren Graham Just Revived Our Hopes For A New Reunion
By El Hunt
Get Even More From Bustle — Sign Up For The Newsletter