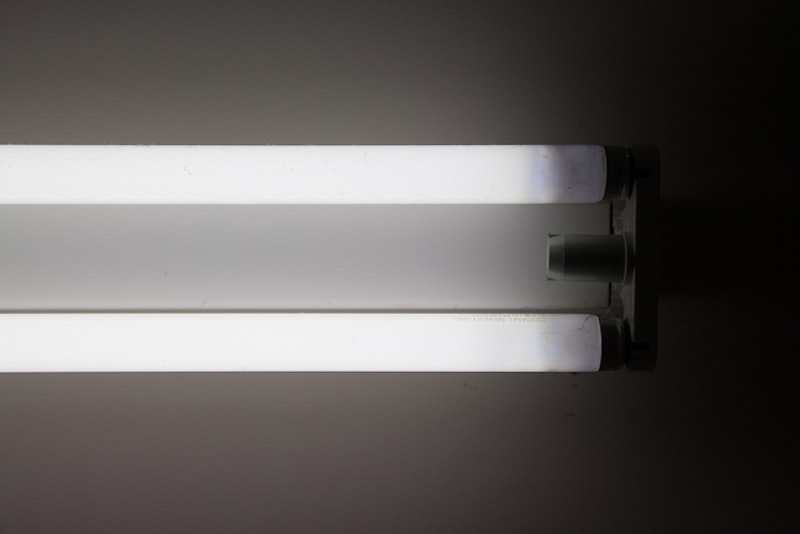 You know that they annoy you with their humming, blind you with their flickering brightness, and make anyone who gets caught in their beams look like they recently crawled out of a fresh grave — but can fluorescent lights harm your health? The common office lighting fixture has long been a source of irritation for workers who find their harsh light unflattering or distracting — but many people believe that spending extended periods of time working under fluorescent lights might actually put stress on our bodies and lead to health problems including migraine headaches, sleep-pattern disruption, cancer, and other nastiness. Is there any truth to the idea that fluorescent lights undermine your health? Or are they just another annoying part of office life, like that one toilet that flushes weird?

Though there has long been public concern about the health impact of fluorescent lights, scientific research has found most of these concerns to be unfounded. So before you get freaked out and decide to only watch Netflix by candlelight from here on out; read on and find out more about the three fluorescent lighting myths that you definitely don't have to worry about. (Though feel free to watch Netflix by candlelight anyway, if you feel like it. That actually sounds kind of fun; I may try that when I get home later.)

The Rumor: The flicker and harshness of fluorescent lights is a one-way ticket to Migraine City. (Ugh, who approved the zoning to create this city? That was a really terrible idea!)

The Facts: File this one under "half-truth": While many doctors disagree with the theory that fluorescent lights trigger migraines on their own, Dr. Andrew Hershey, director of the headache center at Cincinnati Children’s Hospital Medical Center, told The New York Times that “[p]atients with migraine are photophobic (more sensitive to light), even when they don’t have a headache...[t]hus being exposed to bright lights (fluorescent, beach, snow, etc.) when hypersensitized...may push the patient over the edge.” And some studies have connected exposure to old-fashioned industrial fluorescent lighting (as opposed to CFLs) with headaches, due to their frequent flickering.

Researchers have also noted that while many migraine sufferers self-report the lighting as the cause of their headaches, fluorescent lighting is typically found in office or school settings, which often also have poor ventilation and little or no access to daylight — factors that can also bring on a headache. So while fluorescent lights probably don't help (and older fluorescents might cause discomfort for migraine sufferers), experts believe that modern fluorescents are probably not solely to blame for headaches.

And remember: If you feel like the fluorescents in your work place are triggering your migraines, you have the right to ask your employer to place fluorescent light filters over them, which might lessen their impact on you.

The Rumor: CFLs give users cancer.

The Facts: CFLs seem like they're the answer to all of our problems (or, at the very least, the segment of our problems that are related to indoor lighting). They're more environmentally friendly, they last longer, and most importantly, they don't constantly flicker like those old fluorescent lights. But maybe your coworker/old college classmate/weirdest aunt posted an article on Facebook that said that CFLs give off a dangerous amount of radiation and create electromagnetic fields (EMFs) that give you cancer, and now you're freaked out. Well, there's no need to be — while CFLs do give off some radiation and create EMFs, so do cell phones. And the World Health Organization has found that CFLs don't give off enough radiation to be a cancer risk.

CFLs are not without their problems — a 2009 study conducted by the Canadian government did find that CFLs give off UV rays, and a Ph. D. at Canada's Trent University produced research that suggested that the radiation given off by CFLs could cause dizziness, eyestrain, and migraines in folks who are exposed to it. But the 2009 study reported that the UV given off by CFLs had no impact on users as long as they kept the bulbs at a distance of one or two feet. So if you use CFLs at a distance of more than one foot from your body at all times, you're golden.

Claim #3: Exposure To Fluorescent Lights During The Day Will Keep You Up All Night

The Rumor: Exposure to fluorescent lights during the day disrupts your body's circadian rhythms so badly, you'll have trouble sleeping at night.

The Facts: Again, this rumor is based on a kernel of truth — because CFLs and LED lights emit blue light (much more so than traditional incandescent light bulbs). Blue light can disrupt the body's production of the hormone melatonin, which helps us sleep. However, exposure to fluorescent or other blue light during the course of your work day won't keep you up at night — blue light can only really impact your sleep schedule if you're exposed to it in the hours leading up to bed. So while you'd be wise to avoid fluorescent lights in the evening, sitting under them during the day won't keep you awake (though those damned spreadsheets you were working on while you were sitting under them still might).

However, some research has suggested the opposite problem when it comes to fluorescent light — workers who sat under those buzzing fluorescent bulbs without seeing any daylight were found to be significantly more tired and less alert than their peers who actually saw some sunlight during the day.

So while fluorescent lights might not be perfect, they're also not as dangerous as a lot of people believe them to be. But if you still want to keep your fingers crossed for the invention of an environmentally friendly bulb whose light won't make you look like you've spent the past week stuck at the bottom of a lake, well, it couldn't hurt.