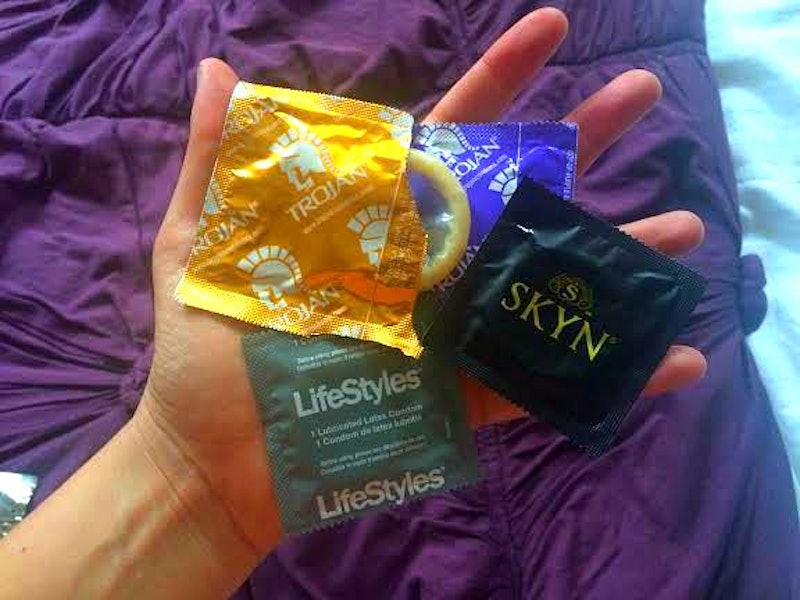 Whoever says condoms are all the same has either never used condoms, or.... no, actually, they've clearly never used condoms. Sure, there are some inherently similar items — but take it from a girl who is used to having sex without condoms (Don't judge! I was in a long-term, monogamous relationship!) and just recently brought condoms back in her life after years of going commando: all condoms are not created equal.

Let me start out by saying, I didn't realize how pricey condoms had gotten. Back in my day, and keep in mind given my long no-condom run "my day" was circa early 2000s (aka my high school days), I certainly don't remember them costing upwards of $10 a pack!

I tested out seven different types of condoms for this test, all totaling just shy of around $50 (thank goodness for "pleasure packs.") And yes, in retrospect, this is a pretty small price to pay for sexual safety and piece of mind, not to mention, I've heard children cost a lot more than that.

I stayed primarily within the main brands, or whatever they had at my local Rite Aid -- the really higher-end variety require a store clerk to unlock that plastic case for you. Fancy!

The higher the price tag doesn't always been better quality.

Ready to see how these bad boys stack-up? Behold seven condoms ranked in order of worst to best to worst—complete with the exact verbal reaction I had when trying each one.

"I felt like that thing was going to rip off at any second."

Verdict: They are thin, I'll say that. Also, for the price, these are probably the best value out of all of them. Now, with all that said, they didn't fit all that great, and were a little uncomfortable for the guy. It also didn't stay in place very well, and would ride up a bit. Mood-killer!

Verdict: Good news? These guys do exactly what they advertise. Inside the condom there is a "numbing agent" that delays the guys. Bad news? It was hard for the guy to get off as a result; plus these condoms are pretty thick. After what felt like a full on sex-a-thon, and I had long reached my peak, it was just flat out starting to hurt me. These things are basically the equivalent of what college kids refer to as "whiskey dick." Ladies, you know what I'm talking about.

"I was expecting more, um, sensation?"

Verdict: So when I read "Ultra Ribbed" I had high hopes. It's right there in the name! But the sensation, for me, was kept at a minimum due to the very thick latex. And not that I'm not a fan of everything spermicidal lubricants do, when it comes to, you know, fighting off disease — they add to that science project smell. Lastly, these, um, irritated my skin a bit.

"I think I need to take a shower."

Verdict: Before starting on this journey, I picked these to be the winner. I had read a few high reviews claiming these were "spectacular" for pleasure. Well, I guess the cheese stands alone (I'm the cheese in this scenario.) First of all, the smell of this one is extremely strong. The strongest of them all, in my opinion. Also, they were very oily and started to irritate me a bit. There were some plus factors though: This one was a roomier, and therefore allowed for more movement, if you know what I mean.

"I don't smell that gross smell!"

Verdict: Plain and simple: this one just seemed the least "condom" of any other I tried. It didn't have that latex, spermicide smell that made me think we were in chemistry class. The reason for that is because it's made from polyisoprene, and as a result is just a lot stretchier. Plus, it didn't leave that chalky, weird residue others often do due to the lack of lubricant, but was still somewhat slippery, for lack of a better word — and it also fit like a glove. Is this where no glove, no love comes from?

Verdict: The ribbed at the bottom of this condom is very intense, but in a good way. I do feel this one would be very hit or miss for some women, however. For me, let's just say it was a home run. It created a great amount of friction. The smell is definitely strong — Trojan definitely wins for strongest smelling lubricant condoms! — but they have extra room at the tip and overall fit more comfortably. I also think these felt much thinner than the other Trojans.

Verdict: This one wins the award for biggest surprise factor. Overall, this is a solid condom. So the "twist" in this is actually rooted in the fact there is extra room in the tip of the condom, that is supposed to provide more pleasure. And it does! Also, there are deep ribs on the condom itself but not too many. I wasn't expecting to be into this one, because frankly, sometimes too many bells and whistles can work against you. But for me, this one struck the best balance: it created a stimulating friction with the "twisty tip" without being too thick and had the right amount of lasting lube; it was pleasurable for us both. One negative: It doesn't stretch super well, so if you're guy's on the bigger side, he may complain that it's tight on the bottom part.