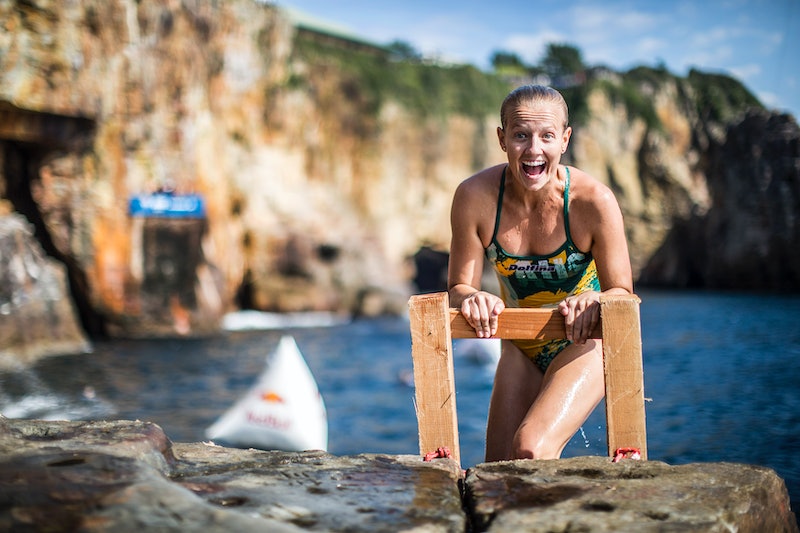 I made the decision to not have kids for personal reasons — but there are plenty of bigger picture reasons to not have kids, too. In fact, a little reading on the role that overpopulation plays in issues like global climate change and the Earth’s depleting resources might convince the most baby-crazed among us to not pass on their genes. But you don't have to be an environmental activist to be freaked out by recent research on what happens when you have a kid; plenty of other research reveals that having a child can negatively impact a parent's individual quality of life, too.

And an increasing number of women are looking at those consequences, and deciding against bearing children. Today, almost 50 percent of women do not have kids — which is the highest rate of childlessness among women of childbearing age ever recorded by the U.S. Census Bureau, who first began recording these statistics way back in 1976.

While it’s not anyone's job to tell a woman whether she should or shouldn’t have children, we don't do anyone a service by pretending that having a child is a life change that occurs in a vacuum — becoming a parent has some very real consequences, both for your life and for the whole world. So if you're on the fence about having a kid of your own, or are feeling a lot of pressure from society or even members of your own family who think that everyone should procreate, here are seven scientifically-verified reasons why not having kid can be good for you and the planet.

1. Kids Aren't So Great For Your Relationship

Many couples think that having kids will bring them closer, enhance their relationship and make it stronger, because they now get to bond over a little person that they created. But the facts don't exactly back this line of thinking up. As Dr. Ellen Walker explained in Psychology Today, “Marital satisfaction rates actually plummet after the birth of the first child."

According to the Gottman Relationship Institute, 70 percent of couples experience a “significant slump” in the quality of their relationship within the first three years of the birth of their first child. This can be due to sleeplessness, unrealistic expectations, and the fact that clashing ideas about how to raise a child can sometimes drive a couple apart.

2. Kids Will Destroy Your Sleep

According to psychotherapist Joyce Marter's writing on PsychCentral, most people realize that they won’t be sleeping as much when they have kids, especially during the newborn phase — but they don’t actually realize just how much sleep they'll be missing until they're already parents.

On average, newborns sleep for 16 to 20 hours a day — but that's spread out over the course of an entire day. Babies constantly wake up to feed, have their diaper changed, express gas, or just engage in the business of being a cranky baby. According to sleep specialist Dr. William C. Dement on Healthday.com, it’s during this time that parents lose about two hours of sleep a night overall — but they’re also sleeping for only a couple hours at a time, further degrading the restfulness and quality of their sleep.

Once the baby starts sleeping through the night (usually at around three to five months of age), parents are able to sleep more, but still lose about an hour of sleep a night until the kid turns two. And though parents will get more sleep as their child gets older, they’ll still have occasional nights of sleep interruptions, because kids get sick, have nightmares, and are just plain needy.

According to the National Sleep Foundation, parents can end up with a "sleep debt" that they might not ever be able to catch up with. The level of sleep deprivation caused by having kids can contribute to stress, moodiness, anxiety, and other health problems. This lack of sleep can also take a toll on the relationship — because if one partner feels the other is getting more sleep than them, it can make for an all-out emotional war.

People with kids aren’t joking when they say they don’t have sex the way they used to before their bundles of joy came along. Not only can the general rigors of parenting make you too tired to have sex — many women can't have sex even if they want to in the months after having a child. Doctors suggest that women not have sex for four to six weeks after giving birth due to the possibility of vaginal pain.

However, according to a study published in the The Journal of Sexual Medicine, 85 percent of women start having intercourse again three months after childbirth — mostly out of concern over their partner's sexual needs, rather than their own desires.

Rates of intimacy among new parents can also drop due to body image struggles after the pregnancy, as well as just being too busy with both work and caring for the baby to get it on.

Not only do kids wreak havoc on your sex life and your sleep patterns — they can actually make you unhappy, especially if you don't live in a rich, English-speaking country. An international 2014 Gallup study found that overall, people with children had a “lower life evaluation," meaning they feel less happy with their lives in general. Parents in Africa, Latin America, the Middle East, and South Asia were specifically cited as being less than thrilled with having kids. Researchers think this may be the case because people in many countries in these regions, due to social pressures or lack of reliable birth control, have less control over when they'll become parents.

But parental unhappiness happens stateside, too. Another 2014 study, conducted at Stony Brook University, examined the life satisfaction of 1.77 million Americans through a series of surveys. The study found that adults between the ages of 34 and 46 who were raising a child reported higher rates of life satisfaction than those without kids — but this happiness bump only applied to parents who genuinely wanted kids, rather than those who were talked into it, or who experienced accidental pregnancies.

Further research into the same data found that most of these happy parents were already satisfied in the first place, in terms of health, finances, and contentment, before kids came alone. So while people with kids may experience more parenting-specific joys than those without having kids, it only seems to work if all other arenas of your life are in working order, as well.

Kids are expensive! A study by Redbook and Visa found that although 76 percent of parents thought that they were financially prepared to have a kid, 41 percent later realized that kids are way more pricey than they thought. And a lot of those expenses can be attributed to pregnancy-related hospital bills, prenatal exams, and childbirth, which are often only minimally covered by insurance.

According to the U.S. Department of Agriculture, it costs $241,080 for a middle-income family to the raise a kid to 18 years of age — and that’s before you toss in college, grad school, helping them get on their feet after graduation, bailing them out of jail after a wild weekend in Cabo, and all the rest of the unexpected expenses that come along with being a parent.

Right now, the world's population is over seven billion people — and if you watch that scary World Population Clock for a few seconds, you'll see that the number keeps increasing. By the time I finish writing this sentence, the number of people on Earth will have increased by at least 300. People are literally having babies non-stop, all day, every day.

But many scientists believe is that the Earth can only carry 10 billion people, max. While we may not be there yet, population projections put us at 10.5 billion people by 2050, and 12.6 billion by 2100. While these scientists aren’t suggesting that the Earth will go flying off into space if we go over that 10 billion mark, they are saying that our planet just does not have the capacity to provide food, water, and adequate shelter for all of those people. It is very likely that once the population reaches those terrifyingly high numbers, food resources will become scare, potentially leading to disease and violent conflicts worldwide.

As Lisa Hymas wrote for The Guardian, though some people would like to blame the population problem and its environmental consequences on other parts of the world, it’s generally white, middle-class Americans who are by far doing the most damage to the planet with our carbon footprint.

As Americans, we own a lot of stuff, take up a lot of room, and our day-to-day lifestyles make a far greater negative impact on the planet than most people in most other countries. An average American’s carbon footprint is 200 times the size of an average Ethiopian's, 12 times bigger than that of someone in India, and even twice as big as the average person living in the U.K. In fact, through everyday practices like traveling in a car, one American child produces the same amount of carbon dioxide as 106 kids in Haiti. So, if you're concerned about bringing your family's footprint down, you can bicycle everywhere, eschew air travel, and never purchase anything in extraneous packaging...or you could just skip having a kid.

More like this
The Best Time To Date After A Breakup, According To Experts
By Bustle Editors
The Top Mistakes Scorpios Make In Relationships (& How To Avoid Them)
By Nina Kahn
Are Leo & Capricorn A Good Match?
By Kristine Fellizar
20 Things You Should Never Tolerate In A Relationship
By Rachel Sanoff and Kathleen Ferraro
Get Even More From Bustle — Sign Up For The Newsletter