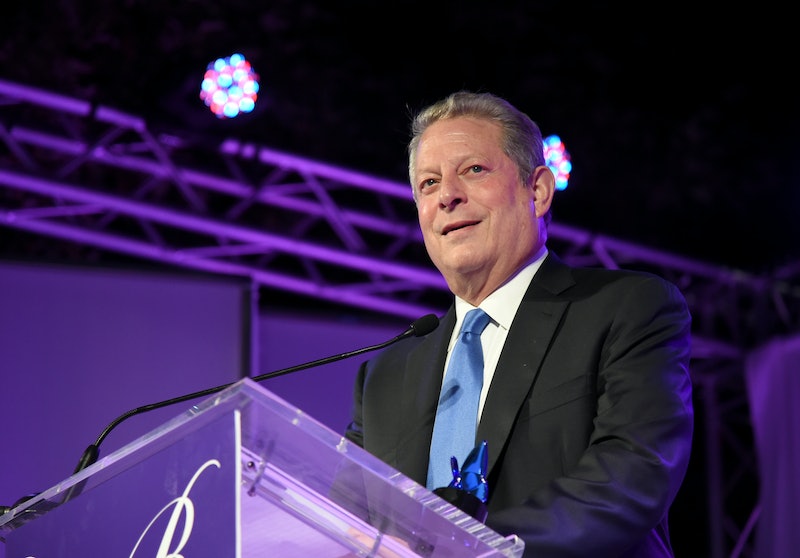 Rumors are swirling that former vice president Al Gore may be interested in entering the 2016 presidential race. A source told Buzzfeed on Thursday that it was only a matter of financial and political logistics falling into place before the 2000 Democratic presidential nominee would formally announce. According to a Gore spokesperson, however, he's more than happy outside of politics, working to help solve climate change rather than hoping to lead the country. So, it seems that no, Al Gore is not running for president. Instead, he'll continue with his role as Climate Reality Project chairman, among the many other job duties he's been balancing since the 2000 election.An anonymous friend told The Tennessean that Gore running would be "news to me, so I think somebody's off base," while Gore spokeswoman Betsy McManus issued a statement to Politico saying that "there’s no truth to it. He’s laser-focused on solving the climate crisis." It's been 15 years since Gore left politics and since then, he's become one of the most visible, vocal activists and educators in the fight against climate change. Gore turned a 2002 slideshow presentation, with the help of director Davis Guggenheim, into the sobering documentary An Inconvenient Truth, released in 2006. The movie would go onto win an Oscar and thrust Gore's activism into the limelight, netting him a Nobel peace prize in 2007.

The same year that Gore won his Nobel peace prize, the first Live Earth concert series took place. Organized by Gore and spanning seven continents, the day-long event raised environmental awareness and was seen by tens of millions of people.

Just because Gore left politics doesn't mean hasn't had much to say in the political sphere. He's testified multiple times in front of Congress about the threat of global warming, endorsed Barack Obama when he was first running for president in 2008, and has continued speaking at such high-profile events as UN's Poznan Climate Change Conference, TED, and SXSW.

In addition to his environmental activism, Gore is also a senior partner with venture capital firm Kleiner Perkins Caufield & Byers. He also serves on Apple, Inc's board of directors and has been in that position since 2001. Gore more than has his hands full with both Apple and Kleiner Perkins, but it is the Climate Reality Project, a nonprofit he launched in 2005 that advocates for the elimination of carbon emissions altogether, that he dedicates the most time to. Given Gore's major successes outside of politics, it comes as little surprise that he'd show no interest in re-entering the field that brought him to national prominence.

More like this
Why Eurovision 2023's Host City Won’t Be Revealed For A While Yet
By Sam Ramsden and Rachel Mantock
What Is Ben Affleck's Net Worth? At 50, The Oscar Winner Makes 8 Figures Per Film
By Meg Walters
Jonah Hill Explains How His Anxiety Attacks Will Change The Rest Of His Career
By Grace Wehniainen
Here’s Where Manti Te’o Is Now
By Arya Roshanian
Get Even More From Bustle — Sign Up For The Newsletter