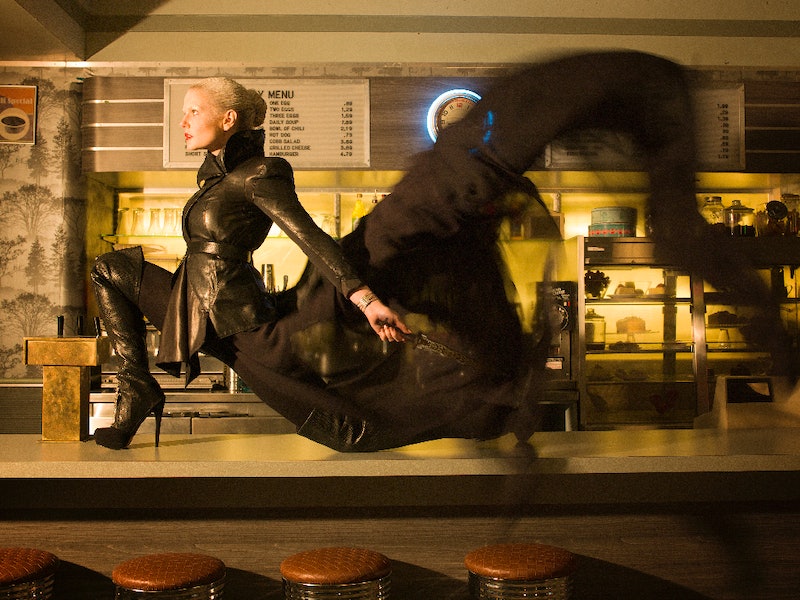 Once Upon A Time is finally going to Camelot — Merlin's beard! Sorry, I couldn't resist a quick Harry Potter expletive. However, it's true, as part of the quest to save Emma Swan from the Dark Curse, Once Upon A Time is adding several new Season 5 characters, mostly from this particular kingdom. We've met the banished Lancelot before on the ABC series, and now the Round Table is expanding to include other familiar names.

From Monty Python And The Holy Grail to BBC's Merlin and that Connecticut Yankee in King Arthur's Court, this area of myth and legend has always been one of my favorites. It doesn't get more classic than literal knights in shining armor, which makes the different interpretations all the more fun. Once Upon A Time has turned Little Red Riding Hood into a werewolf, Peter Pan into a sadistic villain, and Little Bo Peep into a warlord — so I can't wait to see what they do with Camelot.

Still, with all of these new characters (and some you may not have heard about yet) it's difficult to keep track of what's coming. Here is a definitive guide to all of the characters we will and may end up seeing in Once Upon A Time. If you're already too freaked out by all of these Dark Emma images and previews, here are some things to look forward to in Season 5.

Realm: CamelotActor: Liam Garrigan, who you may remember from the last season of 24. Description: According to the Season 5 casting call per TVLine, Arthur is a “'good and just ruler' who, beneath the surface, 'is a master manipulator who can carry a grudge to the grave, and maybe beyond.' He harbors an 'eternal burning love' for Guinevere that can lean toward being a bit…controlling."Theories: My personal theory is that Arthur will be Season 5's sneaky villain. Also, is he immortal? Did he die? What's this "beyond the grave" stuff talking about? Whatever the case, I didn't vote for him!

Realm: CamelotActor: Elliot Knight, who starred in Sinbad and played Aidan Walker on How To Get Away With Murder.Description: “'A man with great wisdom and intelligence beyond his years,' someone who has always put duty in front of his own desires, even at great personal cost."Theories: According to the Sorceror's Apprentice, Merlin is the only one who can rid the world of the Dark One curse.

Realm: CamelotActress: Joana Metrass, a Portuguese actress also in The Man From U.N.C.L.E.Description: TVLine described the legendary monarch as a “'headstrong queen' who fell in love with her husband’s most trusted knight, the dashing Lancelot [and] now must balance her own happiness with the well-being of Camelot."Theories: I have a feeling that Guinevere is the one really ruling Camelot.

Realm: CamelotActor: Andrew Jenkins, who has guest-starred on Wayward Pines and Supernatural. Description: We don't know much about OUAT's take on this member of the Round Table besides being "loyal."Theories: The above instagram was taken with Disney choreographer Paul Becker... and he's not a fight choreographer. Are our heroes going to take a pit stop at a Camelot ball? I'm into it.

Realm: The Enchanted Forest... of Scotland?Actress: Amy Manson, who you may recognize from Atlantis and the UK's Being Human and Misfits.Description: The character was disguised under a fake casting call for "Rumplestiltskin's Mother," who we will not meet this season after all. The call went out for a Scottish actress to play "stunningly beautiful... plucky, strong and imbued with an unshakeable sense of self-confidence.”Theories: Yup, the Brave character is the next recent Disney favorite to join the Once Upon A Time universe. However, here's a question that's popped up in comments sections and my own head — is she Zelena and Robin Hood's daughter? The hair color and affinity for archery sure would fit, and Dark Emma could see into the future the same way Rumplestiltskin used to be able to do.

Realm: UnknownActor: UnknownDescription: Malificent does not even remember, as Lily's conception happened in her, uh, other form. Theories: While it won't be an immediate priority, OUAT will get to this story in Season 5. My money's still on Jafar, who was played by Naveen Andews in Once Upon A Time In Wonderland. You know what they say about vipers and dragons...