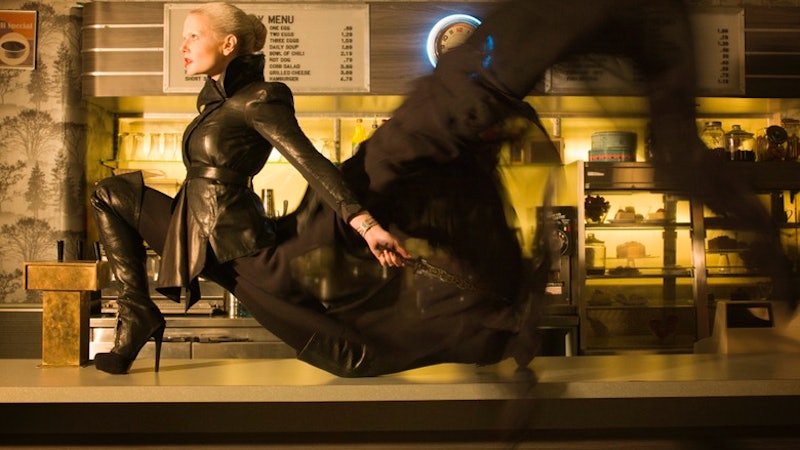 We're slowly inching ever closer to Once Upon A Time Season 5, and while it's still a little over two months away from kicking off, viewers are getting more and more hints lately about what can be expected when it finally returns to our screens in late September. The cast and crew started filming up in Vancouver earlier this month, and while we know that the first episode was titled "Dark Swan", Once executive producer Adam Horowitz also shared the title page for the second episode of the season on his Twitter page on Monday. Season 5, Episode 2 is called "The Price", and while those two little words can have all kinds of meanings, one thing's for sure: the Dark Swan storyline is going to have deep and long-lasting effects, and I'm not sure I'm ready for it.

It's become one of the most well-known and lasting tropes in the series: all magic comes at a price. And given that Emma, the former Savior, holds the greatest dark magic at all, it's safe to assume that this arc isn't going to end well — or at least without lasting effect on those Emma loves and who love her back. It's an exciting yet terrifying prospect, but what, exactly is "the price" of being the Dark One?

The Dark Swan storyline is going to be as slow burn as they come, and we can likely count on it lasting at least through the first part of the season, which will be comprised of ten episodes before the dreaded winter hiatus. That means Emma could get up to any number of terrible things this fall, like traversing realms and crushing hearts — though hopefully not too much of that will be happening since I'd prefer she come out of this whole thing with as little PTSD as possible. Of course, it's necessary that for Emma to truly grow as a character and for the story to be believable, she digs deep into what such evil means for her and how overpowering it can be before ultimately choosing the light with the help of the people who care about her.

There is, of course, the previously-discussed element of Emma's inherent darkness to consider, anyway. Snow White and Prince Charming were never as noble as they claimed to be, as viewers discovered late last season, given their willingness to sacrifice Maleficent's child and curse it to a life of misfortune to keep Emma in the light. Given that the Savior's original fate was to be anything but, is it any wonder that her narrow escape, however out of her hands it was, would come back to haunt her in the most extreme way possible?

The most logical conclusion to draw from "The Price" is that it concerns how to get the Dark One out of Emma and restore her to her former self while banishing the creature for good. Only Merlin knows how it can be done, and it likely won't come easily. Such a thing is possible — Emma certainly can't stay dark for good — but what will it cost Emma and her loved ones, and how will they deal with the aftermath? The answer to those questions are the scariest part of the Dark Swan story arc for me, and I'm both excited and anxiety-ridden at the prospect of finding out.

No doubt confronting the darkest parts of herself and the acts she's capable of committing when she's not entirely herself will be difficult for Emma to process once she's no longer the Dark One. Emma is, after all, good at her core and cares about the people and world around her. How will she cope when forced to face the things she's not proud of having done when fighting the Darkness, and how will that affect her relationships with the people she's closest to? It should be interesting (and likely heartbreaking) for her parents, Henry, Regina, and Hook to deal with Emma not only as the Dark One, but more importantly when she's back to herself again. The good thing is, Emma has people who believe in her and who won't give up on her no matter what, and that counts for everything.