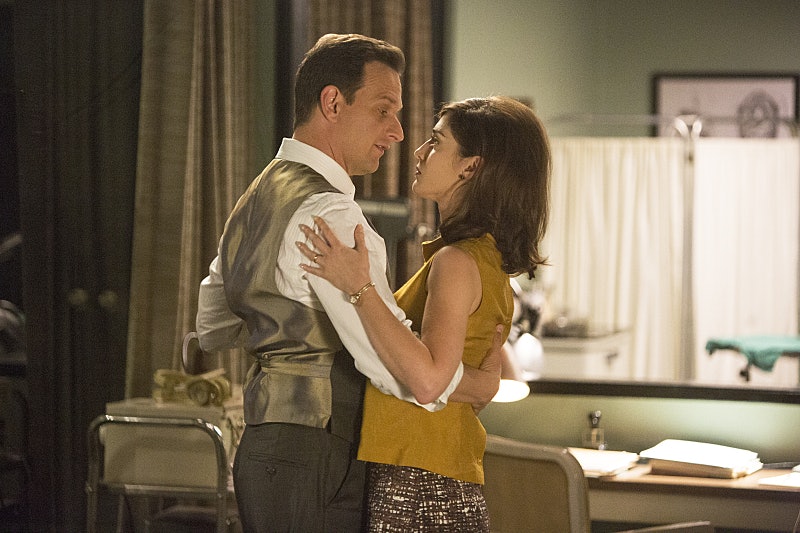 After multiple failed attempts to have adult alone-time with Bill, Virginia Johnson finally gets some this week. Unlucky for her research partner, he isn't there for it. Instead, she finally gives into the charms of the study's new sponsor, the dashing perfume magnate Dan Logan. Virginia and Dan slept together, and the first time probably won't also be the last. Masters Of Sex can and does swing far away from the history of the real Masters and Johnson at times, but also frequently draws dramatic influence from actual events. So, did the real Bill Masters have a rich and handsome rival for Virginia Johnson's love? Is Masters of Sex's Dan Logan based on a specific person?

The non-fictional versions of Masters and Johnson covered a lot of terrain in their research, especially once they were published, established, and widely respected. Among their annex studies was one on the scents and pheromones give off by women; an endocrinologist named Joan Bauman was actually heading up the work. The research was funded by interested parties in several industries, including the perfume and flavorings game. It was through this link that Virginia Johnson met Hank Walter, the chairman of International Flavors & Fragrances, Inc. and described in the Thomas Maier book that the series is based on as an "older, yet virile man of considerable accomplishment who showered Virginia with attention and delighted in her presence." ("You're a woman who deserves more than coffee in some lobby.")

He's been aged down a bit for the show, but Dan Logan is unquestionably a fictionalized version of Hank Walter. (Even their manner of speaking sounds the same; Hank's was noted by a journalist for being "rich in sexual allusion.” Dan can't hold a conversation without innuendo.) This isn't great news for Bill and Virginia 'shippers and worse news for Bill himself, because Walter was entwined in real Virginia's life for an extended period of time. Though Walter was married when he began seeing the researcher, they carried on an intimate and intense affair. He would even join the Johnsons on family vacations. Masters remained ignorant of Hank's growing attachment to his partner for a while. By the time he found out, Walter had intentions of leaving his wife and marrying Virginia. We've seen on the show time and time again how Michael Sheen's Bill can react when he feels hopeless and cornered. This personality trait is based in reality too. Johnson's possible departure spurred Masters into action.

"Perhaps Bill felt jealous, suddenly realizing that the “perfect woman” he had trained and elevated was about to leave him. He didn’t plan to stand around and watch their partnership fall apart. Convinced this threat was real, Bill resolved to do something about it."

It's because of Johnson's relationship with this charismatic perfume millionaire that Bill Masters bit the bullet and divorced his first wife. So far, the third season of Masters seems to be centered around a re-calibration of the Bill and Virginia relationship. This week, he muses to his neighbor how distressing it can be to watch someone who seems "to be slipping away." He struggles to retroactively inject some romance into their past, and his efforts only seem to make Virginia sad and regretful. They've always connected most in work and in bed. The trouble is, a very handsome playboy with his eye on Virginia has set up shop in their office and (to Virginia's mother's chagrin), they can't even find a place to get it on. They're off their game. But, history is history, and I'm betting that the show won't deviate far from the real-life drama that prompted the two to take their personal lives public and make it legal. Dan Logan has a juicy legacy to live up to; but after that suave slow-dancing move, I'm confident he can do it.