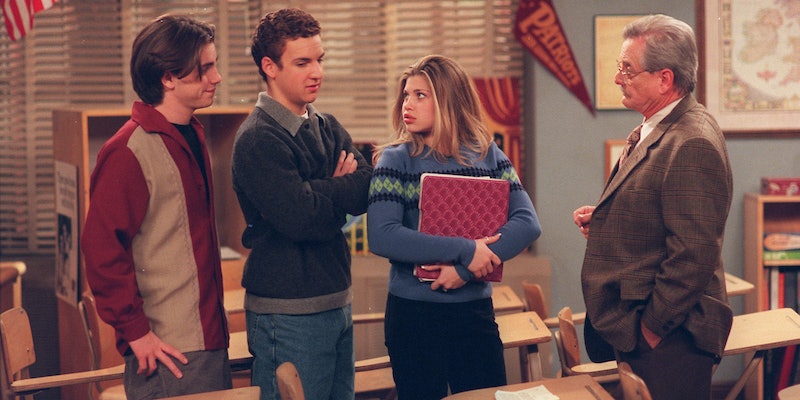 Any true '90s kid remembers watching Boy Meets World on television when they were younger. Shawn was our first crush, and Cory and Topanga were our OTP before that was even a thing. Through every high school heartbreak and countless life lessons from Mr. Feeny, we quite literally grew up with the characters, and as they matured, so did we. However, watching the series now as adults is a bit different. Looking back on it, you find that there are quite a few things that flew right over our naive heads — because even Disney Channel shows have dirty jokes buried in them every now and then.

Though ABC prides itself on being a family-friendly production company, Disney films have also featured a few dirty jokes from time to time. Whether they were all intentional or not (I choose to believe not), we simply cannot deny them. Boy Meets World was no different. And honestly, between heartbreaker Shawn and dim-witted Eric Matthews, are you really that surprised? I took the time to look through the YouTube archives so that you don't have to. Here are just a few classic blink-and-you'll-miss-it dirty jokes from the show.

1. The French Do It Better

As Minkus tries to teach the boys how to speak French, Eric is more concerned about how the French kiss. Spoiler: The tongue is not silent.

2. Safety First When It Comes To Horror Movies

After Shawn tells everyone that virgins are safe when it comes to horror movies, he concludes by saying he will probably get "as sick as you can possibly get without ... actually ... dying.” OK Shawn, TMI.

3. Eric And His Glowing Aura

We all know what Topanga means, but obviously Eric doesn't. Like when he says, "There are a lot of guys that won't take aura for an answer." What exactly is he getting at here?

4. Mrs. Matthews Gets The Wrong Idea

Maybe Cory should have used a better choice of words. When he says that he thinks he went too far with Topanga, his mom starts to freak out.

5. Eric And His Hickey Problem

Wow, Mrs. Matthews sure walks in on a lot of awkward conversations between her sons.

6. Cory Has Heart-To-Heart With Topanga

OK, so maybe this one is a little more obvious. Cory doesn't even try to hide that there is only one thing he wants to do on his honeymoon, and it isn't scuba diving.

7. Eric Is A Peeping Tom

One thing is for sure: Eric is certainly blunt when it comes to dirty jokes. This scene may be completely weird and over-the-top, but it is definitely humorous.

As the cast of Boy Meets World grew up, they began to deal with more and more adult issues — sex being just one of them. However, that doesn't mean they couldn't be sly about slipping some of these adults jokes in the script, which just makes going back and watching the episodes that much funnier.