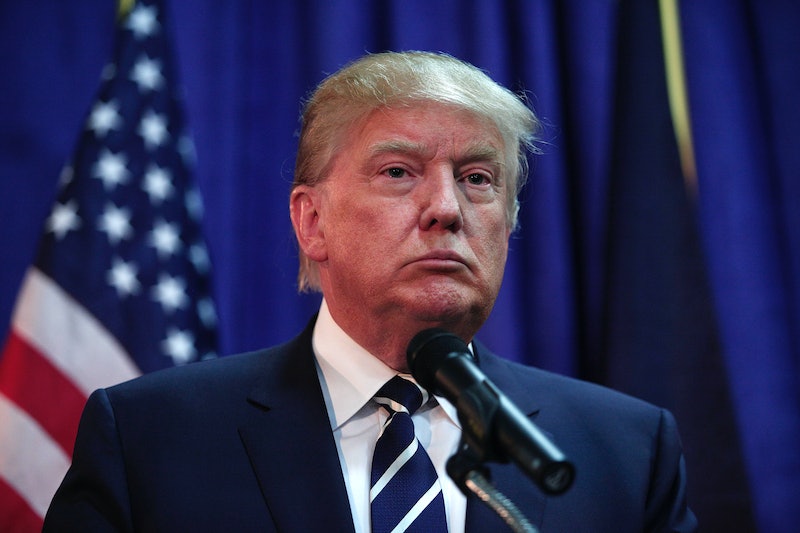 After his famously inflammatory comments about Mexican immigrants in his campaign announcement speech, Donald Trump has been pressed to answer more questions about his immigration plan, should he become president (God help us all). Trump released his detailed immigration plan Sunday, and its three main points are far-fetched, if not a bit unrealistic. The most ridiculous aspects of Trump's immigration plan show that Trump wants to be taken seriously as a candidate (*shiver*) and that he was actually serious about building a wall along the U.S.-Mexico border.

Trump came under fire during the beginning of his campaign when he called Mexican immigrants rapists and drug dealers before saying "some" must be good people. Throughout his campaign, Trump has called for the deportation of all undocumented immigrants, according to CNN. But, he said he would allow "the good ones" to reenter the U.S. legally. Unfortunately, his policy plan doesn't mention that promise at all; rather, it calls for deporting all "criminal aliens" ('cause, you know, Mexican immigrants aren't from this planet). Trump — the guy who landed his helicopter at the Iowa State Fair — said the country needs immigration reform that "puts the needs of working people first, not wealthy globetrotting donors," according to his plan. Here are the five most absurd parts of the plan.

Build A Wall Between The U.S. & Mexico — Oh, And Make Mexico Pay For It

The Mexican government has taken the United States to the cleaners. They are responsible for this problem, and they must help pay to clean it up. We will not be taken advantage of anymore.

Until Mexico pays for the wall, Trump said he would enforce a number of fees and wage-related policies, "among other things," according to Politico:

This is the part where Trump repeatedly refers to undocumented immigrants as "criminal aliens," according to Politico. He wrote that he would kick them all out of the country, en masse, regardless of what job positions they might hold, "by canceling any visas to foreign countries which will not accept their own criminals, and making it a separate and additional crime to commit an offense while here illegally." Yes, Trump wants to make it a crime to commit a crime, because they're, like, criminals who are committing... crimes! Yes, that's it. Write that down!

Detention For All Undocumented Immigrants, Not Catch-And-Release

Trumps plan writes, "Illegal aliens apprehended crossing the border must be detained until they are sent home, no more catch-and-release." Yeah, because adding to the 2.2 million people in U.S. jails and prisons will definitely save taxpayer money.

All Businesses Will Be Required To Hire American Workers First

Trump hopes to stop all those Mexican immigrants from taking our jobs here in 'Merica (that doesn't happen) by suspending any new green cards from being issued to workers abroad — not just from Mexico. He wrote, "there will be a pause where employers will have to hire from the domestic pool of unemployed immigrant and native workers." Trump argued that immigrants are driving down wages and keeping women from entering the workforce. But, in reality, poor immigration law that allows corporations to exploit immigrants is what drives down wages, and women have a harder time entering the workforce, more often, because of patriarchal views about women in the kitchen, etc.

Trump wants to eliminate a policy that grants children born in the U.S. American citizenship, even if their parents were undocumented immigrants. That policy would actually require a constitutional amendment, because anyone born in the U.S. has been considered a U.S. citizen since the adoption of the 14th amendment in 1868, according to the Los Angeles Times.