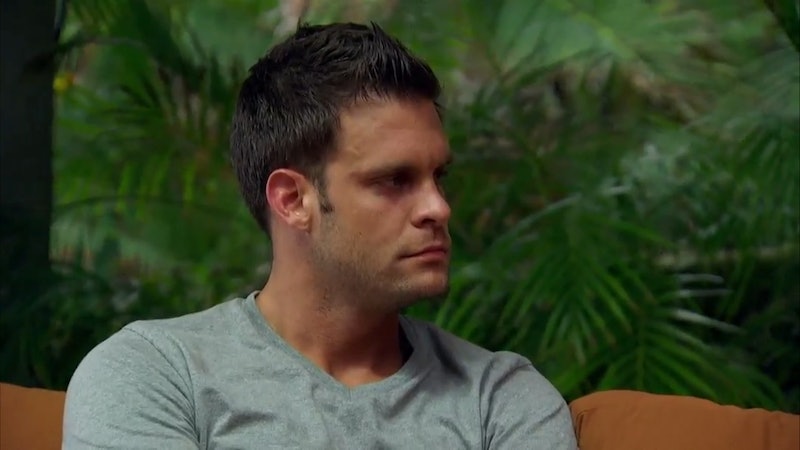 Hey, remember when Joe was on Kaitlyn's season of The Bachelorette? Yeah, me either. Because it's impossible to see past the blinding anger he's caused in my brain with his treatment of other human beings during his all-expenses-paid vacation to Mexico. Basically, Joe Bailey is the Bachelor in Paradise villain, hands down. I know there have been villains on various Bachelor-franchise shows in the past, but has there ever been one with such little self-awareness, so lacking in conscience as Joe Bailey? One look at Joe's worst Bachelor in Paradise moments cements him as one of the biggest jerks the show's offered. From the moment he his loafer hit the Sayulita sand, he hasn't stopped lying, manipulating, and telling the cameras that other people were making themselves look like idiots... all while he is making himself look like an absolute sociopath.

Joe has almost too many moments of being The Worst to even count. (It might be easier to count the times he wasn't acting like a manipulative maniac... surely he was nice to Chris Harrison when he entered the resort grounds? There were those moments when he first arrived when he was just totally silent. Ah, what peaceful times they were.) All of the most blatant offenses center around his initial courting of Juelia, she of single-mother widow status, who he wooed in order to grab her rose and stay in Paradise long enough for Samantha to get there; Sam, who it was later proved he'd been talking to prior to the show; and who happens to be Jeulia's best friend from her Bachelor season. Oh, it is a mess, and Joe is the eye of the douchebag storm... Here are his top 10 worst moments, ranked.

Making Juelia think he liked her when he actually had no interest in her and was, in fact, telling producers that he thought she was "not that smart" and making it perfectly clear to other Paradise-ers that he was just biding his time until Sam got there was probably the nicest thing Joe has done to her so far on the show. At least in those small moments he wasn't totally breaking her down even if it was the tip of his manipulation iceberg.

Would I go on three consecutive Bachelor-verse shows? No. But, would I say it was "terrible" that someone was taking a second shot at Paradise right in front of them while I myself was participating in the same show? Absolutely not. Because I'm not a raging jerk.

In fact, Joe has made it a real habit of actin holier than thou to people who are in the exact same situation that he is. When Dan pulled Joe aside to go talk to Juelia, Joe started getting all huffy, saying that it was always "the 35 and 40-year-olds" who were getting in his business and proceeded to talk about how pathetic Dan was. Let it be stated for the record that, according to their ABC bios, Dan is 32 and Joe is 28 (probably 29 now).

Another man in his 30s who was really bothering Joe was Mikey, who had the gall to tell Juelia that he thought Joe might be there for the wrong reasons. When Mikey approached Joe to talk about this man-to-man, Joe convinced him that he cared deeply for Juelia and basically wanted to be a step-father to her daughter, causing Mikey to apologize like a human... causing Joe to tell the cameras, "I just made Mike my b*tch" (pronounced, "me beech," of course). Charming.

Joe did a number of terrible things to Jonathan during their time together on BiP, namely, telling Jonathan that he betrayed his friendship by telling Juelia that was Joe was there for the wrong reasons, just shortly after Joe had said this terrifying thing to the cameras about his very good pal: "I would break his f*cking jaw and beat the f*cking pulp out of his f*cking brain, I swear to god. I won’t stop until his brains are coming out of his ears, I swear to you." Friend of the year, everyone!

And, after manipulating Jonathan so hard that he started thinking he had compromised every single one of his principles for this show and began weeping uncontrollably, Joe comforted Jonathan by telling him that he had done the right thing — oh yeah, Joe also made Jonathan tell Juelia that Jonathan was a liar — and that his son would be proud of him. You keep his son's name out of your mouth, Joe.

4. Informing Juelia That She Had Not Been Told About Samantha

So, both Mikey and Jonathan tried to warn Juelia about Joe, right? And, sure, maybe it was partially to secure a rose for themselves, but they still saw them warn Juelia thoroughly. Later, when confronting Joe about how quickly he dropped her as soon as Sam arrived, Juelia tells him that the guys warned her that Joe was just there for Sam. His response: "No they didn't," repeated over and over until Juelia is forced to give up. He just... tried to tell her that she hadn't heard something that two different people had told her.

But Juelia had another ace up her sleeve that Joe would have to accept... he may have thought he could get away with mistreating her to stick around for Sam, but perhaps he forgot that Juelia and Sam are good friends. So, after refusing to apologize to Juelia, acknowledge that he did anything wrong, or really even show her any amount of human decency, Juelia lets him know that she'll probably have to give her friend a head's up that the guy she's dating is an extra-heavy toolbag. And, then those apologies just come pouring... it was disgusting.

Then, after pretending to apologize to her, and pretending to say that he's sorry to the cameras, and that she's a nice enough girl and he didn't mean to hurt... oh, wait, what's her name? What's the name of the woman I spent 24-hours telling I hadn't felt like this about anyone before and making out with and demanding, "What are my intentions now?" WHAT'S HER NAME?!?! Now, a spelling question, I could understand, but honestly Joe, get your stuff together.

But, really, it's just everything that comes out of this guy's mouth. It really seems like he couldn't say a sincere or honest thing to save his life. Remember when Joe was coming in and everyone was gearing up for how hilarious they'd heard he was. And then he arrived, and after an hour of silence, all we've gotten out of him in the form of humor, is terrible puns and rhymes. "Rose before bros"... that's the best you can do? There's only one villain rule on these shows: If you're going to be evil, at least be funny. (Maybe someone can get Joe in touch with Courtney Robertson?)