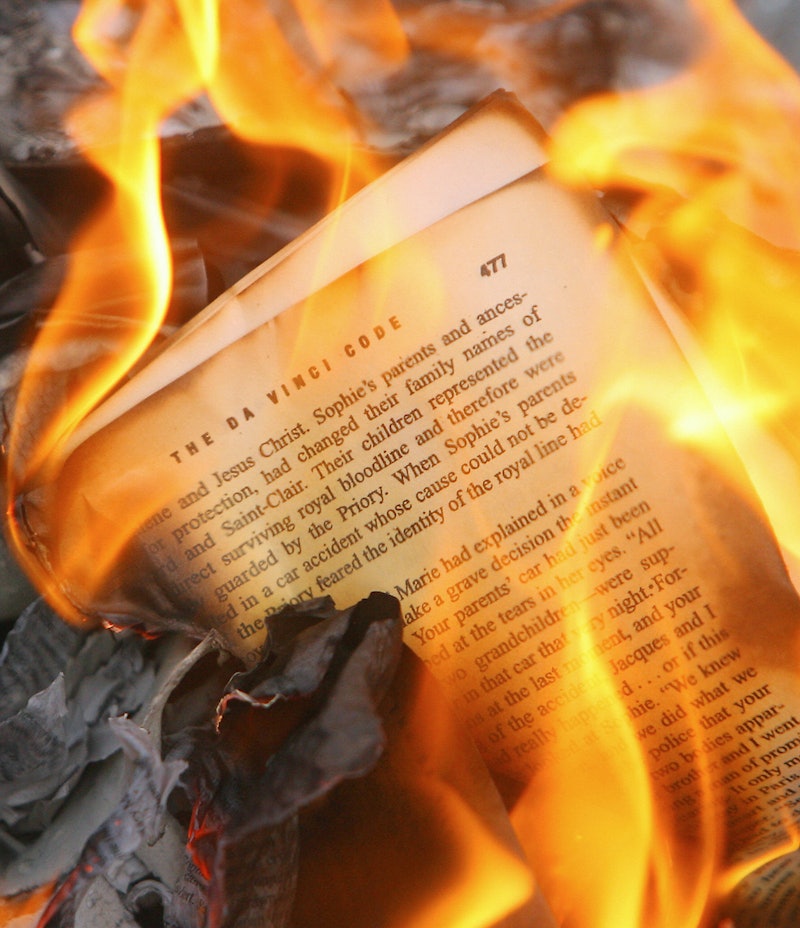 There's something weird going on in Colorado with crimes against books. First, earlier this year a section Colorado of highway was plagued by a "book tosser" throwing books out of his car window onto the side of the road. And now a little free library in Denver has been lit on fire. As a book-lover from Colorado, I want to know what exactly is going on in my home state... and whatever it is, can it stop now, please? The books deserve better.

Fortunately, at least one of these mysterious crimes against books has been solved already. Although the case of the mysterious paperbacks on US-287 between Longmont and Lafayette, near Denver, baffled residents for weeks, eventually the "book tosser" was identified as Glenn Pladsen, age 62. He claims that he threw out thousands of books along the highway over the course of several weeks because he "couldn't figure out another way to get rid of them." Apparently, donating them to the library or taking them to a used book store didn't occur to him? Even recycling would have been more respectful. Instead he tossed the books, most of them paperback romance novels, out of his car.

Because "crimes against books" isn't actually a recognized statute, Plasden was convicted last week of littering and fined $1,725 to cover the cost of cleaning up the books, and given 30 hours of community service. This seems like an appropriate time to use the expression "they really threw the book at him."

Even more disturbing, though, is an even more recent case out of Denver in which a Little Free Library was set on fire. Little Free Libraries, of course, are public lending boxes in which people are encouraged to take a book out of the box, and leave a book in its place. Which is the best thing ever, and why anyone would want to light one fire is beyond me.

The man who put up the Little Free Library in question, Dan Wisdom, woke up at 3:30 a.m. last Monday to firemen in front of his house, putting out the burning box and the burning books inside. He told the Denver Post that his first thought was "Why would somebody do that?" And in case you wanted an even bigger tug at your heartstrings, he says that his nine-year-old daughter, who loves books, is similarly upset.

The world is full of monsters.

To restore a little of you faith in humanity, however, after Wisdom posted about the fire on his real estate company's Facebook page, offers of support began pouring in. People have offered to help rebuild it, and the comments on Facebook are full of offers to donate books once a new little free library is up and running. People have even defied the mystery arsonist by placing more books in the half-burned box.

So, the world is full of some pretty neat humans, too, I guess.

Of course, the fact still remains that I am concerned for my home state. Is some strange, mystical, anti-books sentiment sweeping the Denver area? First it was thousands of books tossed along a highway, and now it's a Little Free Library and its mini-book collection set on fire? What is going on?

Hopefully the rest of 2015 won't involve any more crimes against books, because I think we can all agree we've seen enough.

More like this
'Line Of Duty’s Jed Mercurio Has A New Crime Drama In The Works
By El Hunt
For Mur Lafferty, Genre Is Everything
By K.W. Colyard
'Firefly Lane' Season 2 Will Be The Show's Last — But There's A Twist
By K.W. Colyard and Grace Wehniainen
10 New Must-Read Books Out This Week
By K.W. Colyard
Get Even More From Bustle — Sign Up For The Newsletter