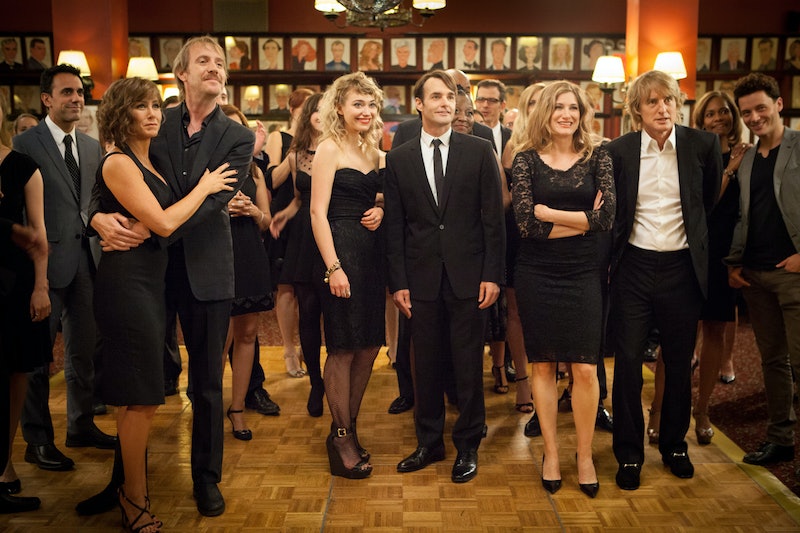 Some of your favorite stars are coming together in a new film called She's Funny That Way, which has been in the works for years and will finally have a limited release Aug. 21. The film revolves around the intertwining relationships of a quirky group of characters in New York City, all of whom are in some way connected to the world of Broadway. Owen Wilson plays the director of a play called A Grecian Evening, while Will Forte portrays the playwright of this show and Kathryn Hahn is the play's leading lady. The title of the show sounds like a Stephen Sondheim musical, while the word "Grecian" brings up flashes of Sophocles, Aeschylus, and all of the other Greek playwrights whose works are required reading in every Theatre Lit class ever. So is A Grecian Evening a real play?

Even if you're not familiar with theatre, you'll feel fairly confident after watching She's Funny That Way that the play-within-a-film is totally fake. It's intentionally supposed to be a dismal show, adding to the satirical humor of the movie. However, the film's emphasis on Broadway and the theatre industry isn't totally out of place, as many of the cast members got their start on the stage and/or have an impressive resume of Broadway credits. Here are a few examples of the theatrical exploits of the She's Funny That Way cast.

Before landing the role of Rachel on Friends, Aniston appeared in the off-Broadway shows For Dear Life and Dancing on Checker's Grave. She has expressed her desire to return to the stage, telling The Daily Express, “I started at theatre in New York in things that aren't remembered but yeah, I love the theatre and I would love to go back to it.

It's no wonder why Hahn is consistently hilarious in every role she does; she's well-trained! The performer studied at the Yale School of Drama before entering the film and television industry. As a student of this prestigious program, Hahn played the iconic role of Sally Bowles in Cabaret and also showed her classical theatre skills as Célimène in The Misanthrope.

Austin Pendleton is a unique addition to this cast in that not only does he have a theatre background, but he is also arguably one of the most well-known names in Broadway history! Pendleton played Motel in the original production of Fiddler on the Roof , and he has acted in, written, and directed a huge number of plays. His inclusion in She's Funny That Way is therefore even funnier because the film is satirizing the niche in which Pendleton himself has worked for decades. SO meta.

She's Funny That Way definitely has star power, but will the movie itself be able to win over audiences? Will it be so popular that A Grecian Evening is made into a real Broadway play, complete with overpriced souvenir cups for sale in the lobby? This remains to be seen, but one thing is for sure: Broadway is a crazy world, and this film doesn't try to deny it.