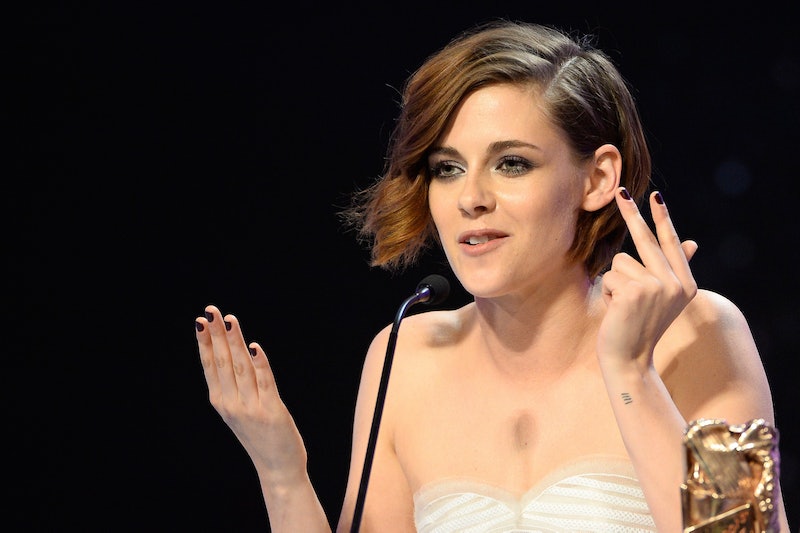 It's been nearly three years since the final installment of the Twilight franchise hit theaters, and all of the stars have gone on to do things that are a little less vampire-centric since. Kristen Stewart is one actress who has seemingly put the Twilight franchise behind her — not that she didn't love her time playing Bella Swan, of course. While her then-boyfriend (both onscreen and off) Robert Pattinson hasn't been shy about his distaste for the supernatural romance, Stewart has always insisted that doing the film franchise was a good experience. But is it one that she would do again — literally? Stewart spoke to Uproxx about a potential Twilight reboot and if you were hoping for her to reprise her role as Bella, well, think again.

Here's what Stewart said when asked if she would sink her fangs back into the Twilight universe:

To be honest with you: I would be interested. I’d be kind of fascinated, but it wouldn’t emotionally affect me one way or the other... I was so genuinely, heavily entrenched in that, and not in a way that felt like an obligation. Even though after the first one, which stood alone, it lasted a long time. It’s hard to speak to a five-year period in a few sentences, but I loved doing it. But that doesn’t mean I want to keep doing it.

For the record, there is no current Twilight reboot in the works, though considering just how many films are being rebooted these days, it wouldn't surprise me if the vampire franchise gets new life at some point in the future. Our second Spider-Man franchise is already in the works not even 10 years after the final Tobey Maguire version came out — a Twilight reboot could very well be shopped around Hollywood next.

If we're operating under the theory that a Twilight reboot is inevitable, then the real question is whether or not it's a good idea. I've never been a huge fan of the franchise (despite the fact that, yes, I did see every film in theaters) but I would actually be kind of onboard with a reboot. Who knows — perhaps it could fix some of the less-than-stellar aspects of the original.

My biggest problem with Twilight has always been the dynamic between Bella and Edward — Bella always seemed to lack agency in the relationship, and though Edward risked a great deal to be with her, Bella always seemed like she lost more. A Twilight reboot could hopefully reexamine the story with a more feminist eye, and perhaps create a story that evened the playing field between human Bella and vampire Edward. Bella was, after all, portrayed by the outspoken Stewart — certainly she would approve of a more independent Bella.