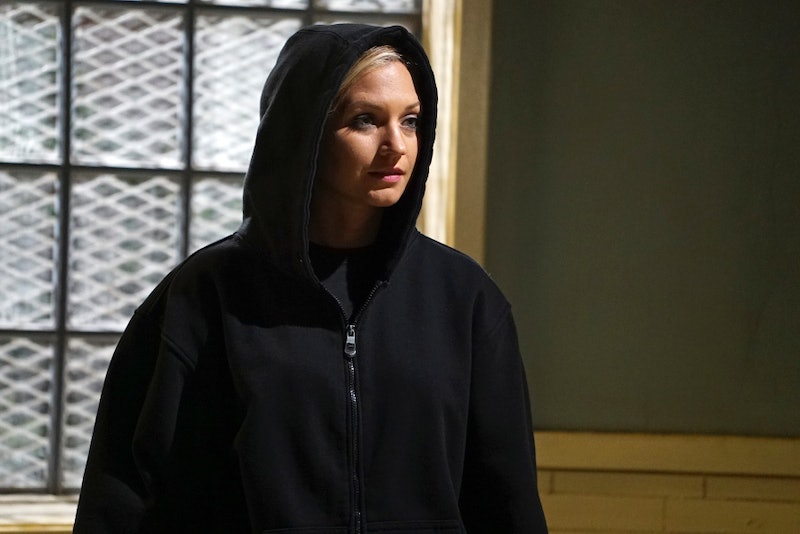 Welcome to the post-Big-A-reveal world, everyone. It's a strange place where you're not sure what's real anymore, let alone what to make of CeCe Drake being A on Pretty Little Liars. Now that fans have spent a week processing it all, it seems that "Game Over, Charles" was no fever dream. CeCe really is Big A, Sara Harvey really is Red Coat and Black Widow, and we really have to wait until January for more PLL. While CeCe's explanation of her actions as A made some sense, it doesn't make up for the massive, gaping plot holes that the Pretty Little Liars midseason finale created.

After the episode aired series showrunner I. Marlene King gave a candid interview with Entertainment Tonight, during which she answered a lot of burning questions. One of them, obviously, being "WTF?" According to her, though, CeCe's big reveal was airtight. King told ET that she "went back and rewatched every single [CeCe episode]" to make sure that she "didn’t make any mistakes in this finale." That clearly shows dedication, but out of the 130 episodes of PLL so far, CeCe has only appeared in 13. That leaves 117 episodes that could be troublesome for the big twist.

For a rundown of some of the biggest plot holes from "Game Over, Charles," check out the finale episode of Bustle's PLL podcast below. Then, read on for even more storylines that no longer make sense in this CeCe-is-A world.

1. How Did CeCe Have A College Roommate?

It's explained that CeCe was allowed out of Radley to attend UPenn. What's not explained is how she would've had a roommate at UPenn, even though she was clearly still living at Radley while taking classes. On this same note, how is it that on "that night," she is described as escaping from Radley, when she clearly had in-and-out privileges?

Just ... this makes my head hurt. All his shadiness. The fact that he's clearly not a real doctor, his mysterious phone calls, how he got CeCe a visitor's pass to Radley, even though she was already a patient there ...

CeCe was even helping Ezra write his "true crime" (LOL FOR DAYS) book about Ali. Explain this, please.

4. CeCe Sent A Video Of Mrs. D Being Buried To Ali

Ali gets a video message with an accompanying text that reads: "I buried your mom the same way I watched her bury you. — A." So if A is CeCe, and CeCe loved both her mom and Ali a whole lot, why would she have taken this video and then sent it to her little sister?

5. Will The Real Fragile Blonde Patient Please Stand Up?

If there's one thing we learned about Bethany Young in the finale, it's that she's not frail. Instead, she is a vengeful little child who will push people off the tops of buildings. This is strange, of course, and only makes us ask more questions. For so many seasons, Bethany has been painted as this troubled child who had a "bad air" around her. What we saw of her in CeCe's flashback to the Radley roof just doesn't match up with the story told by Doctor Palmer.

Out of all the unanswered questions, I need to know why Mrs. D would take young Bethany out of Radley to ride this horse and make Bethany call her "Aunt Jessie," even after she knew that Bethany framed her child for murder.

Wouldn't Lesli have known CeCe at some point while at Radley? Why didn't she ever mention that to Mona or the Liars when she was trying to defend herself as an A suspect? Also, if Lesli and Bethany were roommates, where was CeCe during all of this? It appears that CeCe had her own room, and since Bethany and CeCe were roughly the same age, how did CeCe snag her own room, and not Bethany?

The finale revealed that Mona hit Bethany with the shovel because she meant to kill Ali. So if Mona was driving down the road and spotted the girl she thought she had just murdered, chances are she wasn't going to stop and help her. For Mona, Ali would have been a ghost, or very incriminating evidence that she just did something horrible. Plus, how did Mona not put two and two together this whole time and realize that she was the one who hit Bethany?

In a flashback, we see Mrs. D furious to learn that CeCe checked herself into Radley pretending to be Ali. So how did CeCe check herself into Radley, when she was already in Radley? Why did Mrs. D buy that story in the first place, knowing that one of her daughters was a patient?

10. All Of A's Medical Knowledge

We're lead to believe that A knows a lot about medical stuff. Remember that time she planted a tiny piece of paper into Hanna's tooth? What about the tracking chips implanted in the Liars in the dollhouse? All of the bones and various other things A has sent the Liars? I know that CeCe is smart enough to get into UPenn and everything, but it doesn't seem like she studied any form of medicine. And you would think it would take some previous hands-on experience to gain those skills — not just reading a lot of books.

11. How CeCe Became The Wolf Of Rosewood

Where did CeCe get her money? Investing, of course. Apparently, she "never made a bad investment." How? When did she learn how to play the stock market?

If this Cece/A thing has really been brewing since season three, there should have been some breadcrumb clues along the way, including some about Sara Harvey. The first mention of Sara comes in season four, when the Liars come across information about her disappearance and wonder if she was the girl buried in Ali's grave (this was before it was revealed to be Bethany). And that's basically the last we hear of her until ... she's discovered in the dollhouse in the season six premiere. Shouldn't there have been a few clues that connected her to Red Coat and/or Black Widow? We still don't even know how she met CeCe, whether she was forced to work with her, and if she is connected to anyone else on the show.

Pretty Little Liars may be jumping forward five years when it returns, but I hope it doesn't forget to fill in these gaps and explain just how everything revealed in the season six summer finale is possible.

Want a whole new perspective on Pretty Little Liars? Watch as people who have never seen the show try to figure out its mysteries in the video below.

More like this
'The Summer I Turned Pretty' Using “Cruel Summer” Has Twitter Begging Taylor Swift To Release A Music Video
By Radhika Menon
Lizzo Proved She’s Team Jeremiah During Her ‘The Summer I Turned Pretty’ Review
By Grace Wehniainen
At 14, Jenny Han Wrote Rom-Coms About Her Friends & Fan Mail To Leo DiCaprio
By Alyssa Lapid
Jurnee Smollett’s Heart Is Healing
By Rebecca Carroll
Get Even More From Bustle — Sign Up For The Newsletter