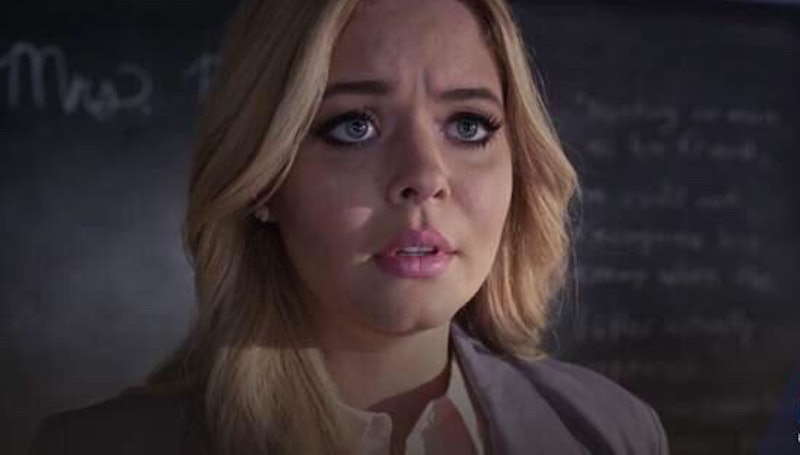 Alison DiLaurentis has had a rough go of it, hasn’t she? This Pretty Little Liars character has been whacked on the head, run out of town, thrown into jail, and tortured for years by an unnamed entity named A. Following the Season 6A finale of Pretty Little Liars, we now know that A is CeCe Drake, who fans were introduced to as Ali’s older friend but is actually her sister. At the end of the episode, the series jumped five years into the future, when Ali goes by Mrs. Rollins and is apparently a teacher. Of course that begs the question, who is Mr. Rollins on Pretty Little Liars? My theory is that Ali married a doctor from Radley. CeCe and Ali were BFFs for a long time, so I wouldn’t be surprised if this news that her sibling and best pal was actually her tormentor sent Ali to talk to a therapist. What if she later married that therapist?

The truth is, Ali hasn’t had much in the way of romance on Pretty Little Liars, and so her story is due. She had something going on with Lorenzo, Toby’s cop partner, and while him showing up at the prom suggested hope for reconciliation, his last name is Calderon, not Rollins. So at some point in those five years, Ali met and married the mysterious Mr., or should I say Dr., Rollins.

Intrepid viewers like myself know that there was a Dr. Rollins who worked at Radley, and, according to E!, the show "will be introducing a new psychologist, the handsome Dr. Rollins." How many people of that name could there be in Rosewood? I believe that the psychologist in the casting call is the very same Dr. Rollins from Radley. Now, I don’t think Ali will be sent to a mental institution or anything. Remember, Radley is closed. But that also means anywhere CeCe would receive mental help would be further away and probably with different doctors.

Maybe when Radley closed, Dr. Rollins stayed in Rosewood, pursuing his own private practice. Dr. Sullivan ain’t the only therapy game in the town, dig? Struggling to deal with her feelings about, oh, the past six years, and knowing that she is now safe from A (aka CeCe), Ali will have elected to see a therapist privately. Like I said, she’s gone through a whole lot. That therapist? Dr. Rollins. The two will develop their own relationship, eventually turning into romance. Is it appropriate? Not exactly, but Pretty Little Liars has gone down that path before. A vulnerable patient and her doctor getting romantically involved screams of exploitation and coercion, especially on this show.

I’m starting to think that Ali's relationship with her new husband spawns the “he” who is after her in the time jump. The other Liars seemed concerned for Ali, not so much for themselves, so maybe this imminent threat has only to do with Ali. Whoever he is, I can’t wait to meet this Dr. Rollins. I just hope he’s not totally evil like the other adult men in Rosewood.