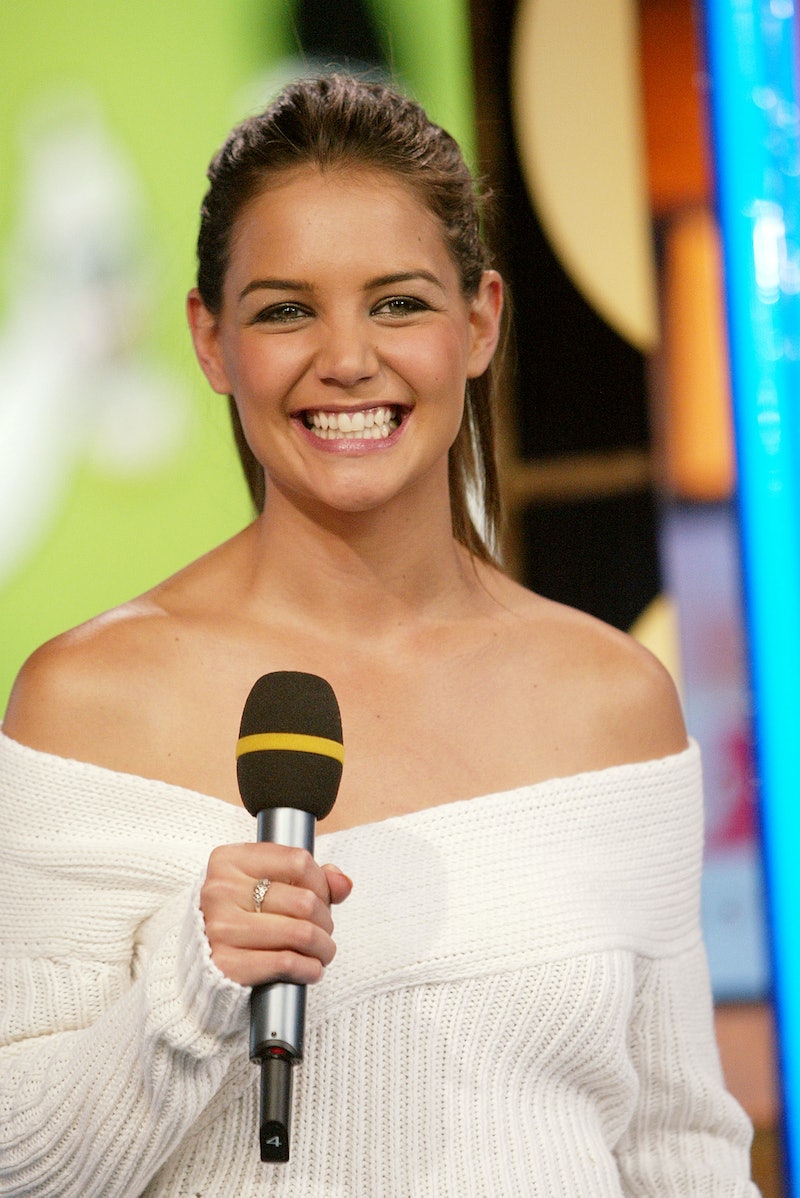 When you were a teenager growing up as a goody two shoes, tomboy-esque type in a small town, Joey Potter from Dawson's Creek, played by the lovely Katie Holmes, was probably everything to you. Joey Potter's style was distinct for TV, in that it basically consisted of jeans and whatever T-shirt or sweater was on sale at the closest big box store at the time rather than a glammed up version of adolescence. It was simple, classic, a little androgynous, and a reminder of who Joey was as a character. She was more concerned with good grades and books than having people like her, and 12-year-old me couldn't have identified with that more.

Actress Katie Holmes' post-Creek personal style is, in many ways, very opposite to that innocent young girl she once portrayed. Holmes' wardrobe is full of designer pieces, glamorous gowns, and tailored trenches. While most of the denim she wears now is probably designer and perfectly cut, I still think there are plenty of similarities in the way the two dress. That all means there's plenty of room for Katie Holmes to embrace some Joey Potter throwback style.

Style inspired by the '90s is still taking up a ton of space on racks and shelves as of late, and it seems like the nostalgia isn't going away anytime soon. So in the name of fashion and Capeside: Make it happen, Katie!

Here are seven Joey Potter outfits that Katie Holmes can and should incorporate into her wardrobe immediately.

Overalls are having a major fashion moment right now and I could definitely see Katie and Suri looking so adorbs in matching pairs at a pumpkin patch this fall. Right?!

This dress was definitely a seventh grader's Seventeen Magazine prom dress dream and that chocolate velvet screams late '90s style. This is a look that would be easy to modernize and perfectly warm and rich for fall.

When it comes to transitional seasons, there's no better friend to us than a denim jacket — and there's no better jacket than one that's light, faded, and a little big. Holmes could totally wear one draped over her shoulders with a chic LBD underneath.

This look is classic Joey and with a trench coat and of-the-moment Nikes, this outfit is basically crying out to be worn by Holmes IN 2015.

A button-down opening over a halter top is Joey Potter gold. It was exactly the kind of look I'd try to sneakily wear as a teen, avoiding any adults while I headed out to hang with friends. Styling something similar with a sheer button-down and bralette (or longline bra) would be a chic way for Holmes to channel Joey.

Hey, once Beyoncé wears something, it becomes officially cool again and Bey wore a bucket hat in the " Feeling Myself " video. I've given up resisting this trend and Holmes should, too.

Joey always managed to sneak a little skin into her tomboy ensembles, usually with the help of a button-down top. Katie Holmes' tailored, chic style would lend itself perfectly to a knotted crisp white shirt with slim trousers.

Joey Potter hasn't left Katie Holmes' heart and hopefully this means that she can still influence her wardrobe, too. My nostalgic little '90s soul depends on it.