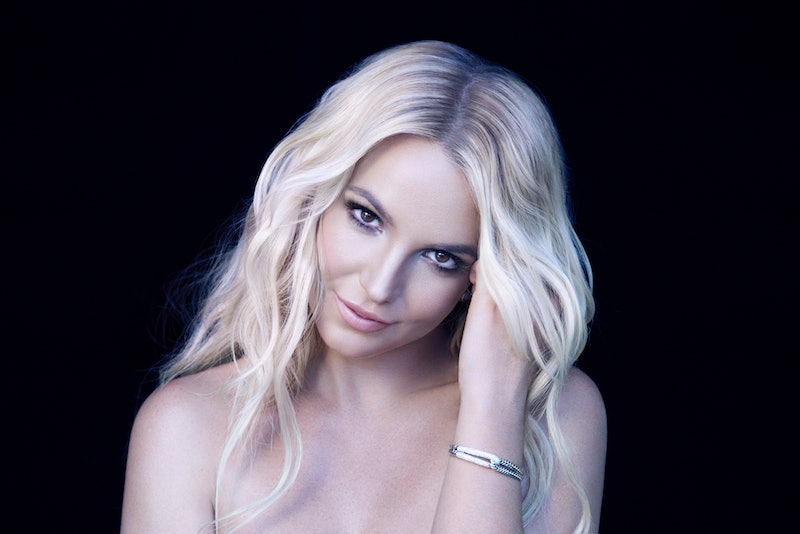 It's like 2001 all over again: Britney Spears' mental health is making headlines. After a series of videos showed her looking vibrant on stage at her Las Vegas residency for the first time in, oh, years, commentators started to look back on what once went wrong in Spears-world. We were all there for the "breakdown" — the head-shaving, the screaming, the weird British accent — but there's never been any public explanation for her psychological downfall. Surely, some people are saying, it's time for Spears, and other celebs who've appeared to suffer mental health issues, to be open with the public?

Not necessarily. I'm delighted every time a celebrity feels brave and healthy enough to talk about their mental health struggles: Demi Lovato, Catherine Zeta-Jones, and Jared Padalecki all earn my respect and millions of high fives. That is some hard sh*t. But I feel like making demands on celebrities to "come out" as mentally ill is not the right way forward. It's an intensely personal choice, and yet somehow parts of the public feel deceived that they don't get a full run-down of Britney's diagnosis, medication, and therapy regime. What?!

It's not in our current attitude towards celebrity to allow privacy or unspoken struggles. If they are suffering, we demand that they come out afterwards with a "My Private Pain" cover on People. But I believe mental illness should be an exception. Here's why.

1. All Secrets Are Not The Same

It's an easy, lazy parallel to make: celebrities who've been hiding their sexuality for fear of career stigma have begun to come out, and make a positive impact on wider cultural acceptance of LGBT life. Why shouldn't celebs with mental health issues "come out" for the same reasons? (Never mind that LGBT people don't have an "obligation" to come out either.)

The parallel, however, doesn't work. To be LGBT is intrinsically a matter of identity; mental illness is a matter of health. Indeed, "I am not my depression/bipolar disorder/etcetera" is a key mantra for many people with mental illnesses. More importantly, however, visibility — becoming a high-profile example of something, and therefore normalizing it — can't be applied as a universal good to all stigmatized elements of life. We shouldn't demand blanket confessional rules for celebrities who've been raped, were badly treated as children, did drugs, or suffered miscarriages, to name a few: every situation is different, and being open about it is an individual's personal choice, often after significant private healing. And in some cases, as I'll talk about in a bit, visibility may come at too high a cost.

2. Celebrities Don't Actually Owe Us Anything

I have a fascination with vintage gossip: the Old Hollywood time before tabloids and E!, when studios rather than paparazzi ruled the media narrative, and old-school celebrity reportage maintained a certain distance in discussing personal lives. It wasn't a more authentic time, or even a preferable one (though I could do less with knowing about the Kardashians' UTIs), but it's important to realize that we haven't always demanded that celebrities show us every wart and flaw. It's a modern condition.

The tables have turned: from once feeling privileged to get any glimpse inside the lives of the famous, we've now become voracious and critical if we suspect them of hiding anything. We've transformed into annoyed parents who resent their teenagers for having secrets and intimate unseen lives. Don't they know we made them? Getting frustrated if you suspect a celebrity is hiding details of a mental illness is part of this feeling, and it needs to be examined. Why should they tell you, a person they don't know, about an intimate and damaging part of their lives? Why do you feel they should?

3. The Health Costs May Outweigh The Visibility Benefits

There are some instances where a public revelation of mental illness has been met with overwhelming positivity. Celebs, after all, have fans who wish them well, and the outpouring of support after mental illness revelations (like the river of lights for depression sufferer Jared Padalecki at Comic Con) can surely be seriously helpful for somebody suffering from a very personal, difficult illness.

But that's the problem: coming out may not be the best thing for a celebrity's mental health. You'll often find that celebs discuss their mental health issues after they've undergone a period of recovery, where it's easier to maintain distance and draw healthy boundaries on what they want to discuss. Those who do disclose details while a serious episode is happening tend to use it to explain mysterious public absences — not for its own sake.

Let's outline the likely risks of a mental health revelation by a celebrity: they'll face misunderstanding and a high likelihood of being viciously trolled; they'll likely feel obliged or pressured into talking about it repeatedly; they'll be told they're privileged and should stop complaining; their professional competency will be questioned; and they'll probably feel highly vulnerable and exposed. Essentially it sounds like the worst thing for possible treatment. Ever.

4. The Responsibility To Be A Role Model May Be Crippling

If you're already suffering from mental illness, the added pressure of being a "poster child" for that illness — because, after all, your name will come up when the condition is Googled — must be absolutely immense. If it's something like depression, which can stem from a perverse and self-damaging desire to be perfect, the results could be seriously damaging. Can you imagine trying to be Little Miss Perfect at having a mental illness as well as at everything else?

Being in the public eye likely isn't great for the mentally ill anyway. So much pressure! But if they choose to keep doing their jobs and enjoying their lives while privately seeking help, surely that's a healthy choice. They aren't obliged to help mental health visibility or share their struggles, and it may better if they don't. Either way? It's their prerogative.