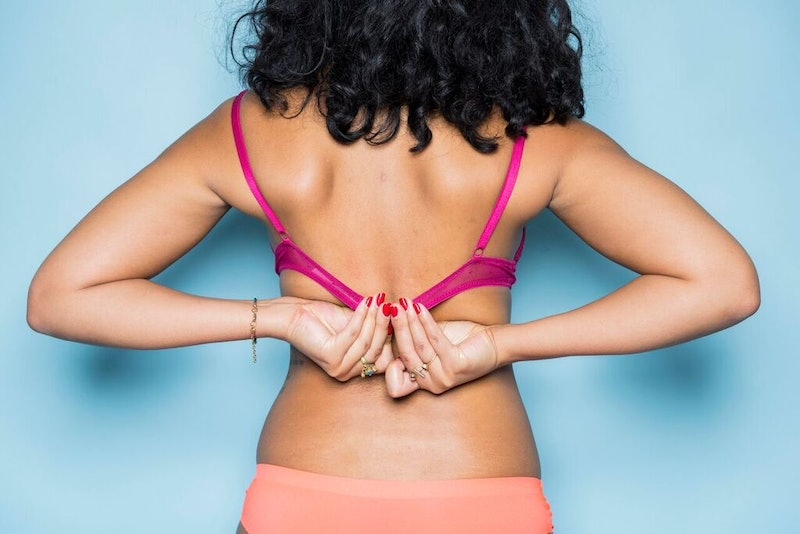 Over the years, the bra (or, more fancily put, the brassiere) has evolved quite drastically. Varying from time period and from civilization to civilization, the history of bras is arguably just as long and complicated as the history of women and their place in this world. From their beginning in ancient times, bra-like garments were created with the purpose of covering, restraining or revealing breasts, but there never seemed to be a ton of concern surrounding breast support or comfort. Breasts were sexualized, symbolized, and stigmatized without much thought put into what the owner of these breasts needed or felt. Ah, patriarchal society.

Today, I feel as if there are already plenty of variation among the different kinds of bras on the market compared to yesteryear. Bralettes, sports bras, and cup bras come in a variety of materials, colors and purposes, and overall, they are more comfortable and versatile garments. However, there are still definite limits to this market, with some very special niche brands being the only companies catering to bigger breasts and plus size women. Retail stores tend to lean only towards bras for smaller breasts or bras that push up and expose more flesh, proving that we definitely have not managed to remove crazy beauty standards from the business of bras altogether. But we certainly have come a long way. Let's take a look back on the history of bras:

According to Huffington Post, Ancient Egyptian women normally wore garments that exposed bare breasts. However, the ancient Greeks designed a piece of clothing to restrain breasts during physical activity. The garment, a band worn beneath and around the breasts (usually over the top of clothing), partially supported the breasts while also pushing them up and completely exposing them. Although originally with the intention of supporting and restraining them for female athletes, bras at this time were mainly concerned with accentuating the breast as much as possible.

With a new age came a new approach to all things breast. According to History Extra, the name of the game for women of the Middle Ages were "conceal and support," a huge and modest reaction to the exposed breasts of years earlier. Bras were simply cloth binders designed to squeeze the boobs into appearing smaller. Anyway, the tightness of the dresses back then were enough to give the breasts tons of support without the help of a binder.

Suddenly, boobs were back in fashion again! People during the Renaissance were huge fans of cleavage. Thanks to the corset, breasts were squeezed and pushed up and out of low-cut blouses. Firm breasts and plentiful cleavages became a sign of high status during this time, and women avoided breast feeding believing that it would compromise what they had to work with.

Things got a little out of hand in the Victorian Age, with ladies going HAM in the corset department (but returning to higher neckline). Impossible amounts of layers and super tight lacing of corsets created the illusion of extremely tiny waists, but was ultimately damaging women's bodies. Scary signs of declining health like nausea, paleness, dizziness, fainting and even long term medical conditions were ignored in the name of fashion and female beauty standards. Women were, after all, "the weaker sex." And so their sickliness and weakness developed from wearing corsets that were too tight for too long was just apart of womanhood. Crazy stuff! This is certainly one "suffer for fashion" moment I cannot get behind.

Thankfully, with early feminism and world wars just around the corner, women were seeing more and more that if they were going to participate more in society and physical activities, the corset had to go.

According to Huffington Post, Herminie Cadolle invented the first modern bra in 1869. It was basically a two-piece corset, with the upper part designed with shoulder straps to better support the breasts. Her invention was apparently more comfortable than your average corset. Thank goodness.

The Bra In the 20th Century

According to Time Magazine, Mary Phelps Jacob invented and patented the "Backless Brassiere" in 1914. The idea came to her when she tried to create a more comfortable bra for a party using two handkerchiefs and ribbon. Her creation was way different than Cadolle's corset bra in that it was lightweight, soft, comfortable to wear, and separated the breasts (no more monoboob!).

Thanks to Ida Rosenthal and her company Maidenform, bras with cups are first introduced to the market. Different sized cups are also offered at this time. Hallelujah!

According to Women's Health Mag, Frederick Mellinger invented the first padded bra in 1947, resulting in push up bras becoming all the rage in the 1950s. A throwback to the Renaissance?

In the wake of feminists protesting bras, condemning them as torture devices for women, Lisa Lindahl invented the first sports bra in 1977, calling it Jogbra. This was one of the first bras created with movement, comfort, and athleticism truly in mind for the women who wear them, according to New York Magazine.

There is a huge variety of bras on the market, and a number of crazy designs (like the cone bra) made popular by cultural icons such as Madonna. Most importantly, as time goes on, we are slowly beginning to dismantle all of the negative ideas about beauty and gender that exclude those less comfortable with femininity and those who cannot conform to unrealistic standards of size and shape.

Thanks to niche companies like Chantelle, it's now more possible to get bras in a huge number of sizes (for those who may not be an A, B, or C cup), and undergarments specifically made to be more gender neutral for those uncomfortable with the more gendered, girly options in department stores.

Being restricted to one or two choices for your breasts is more or less a thing of the past, as more and more options are created for people who wear bras. Hopefully, bigger retail and department stores will pick up on the need for more plus size-friendly and queer-friendly options, and begin offering these types of bras on a larger and more affordable scale. But for now, I'll settle for my $20 lacy bralettes.