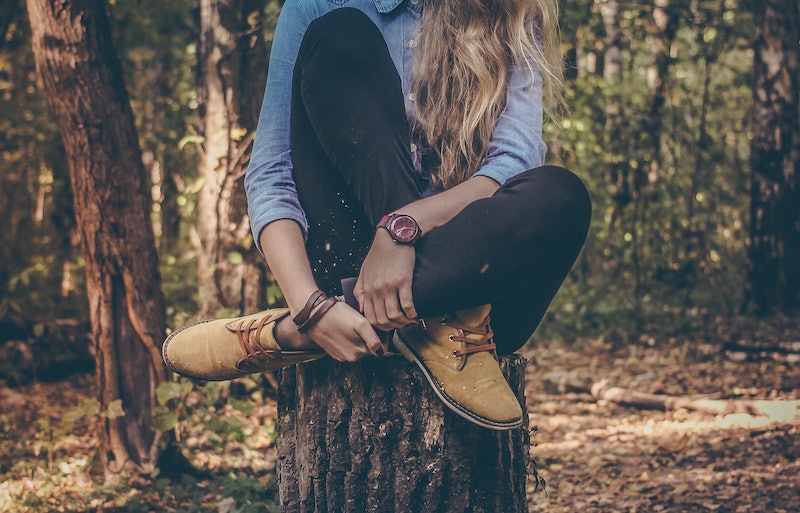 If you're interested in women's health news — or just your own overall horniness — then you're probably well aware that the FDA issued a huge decision today on flibanserin, approving female libido-raising drug referred to by many as "the female Viagra." The drug has captured a massive amount of public attention over the past few years, earning endorsements from folks who thought it was about time that women had their own drug to help with sexual issues and side-eyes from detractors who claim that the pill is not effective enough and has too many side effects to be put on the market. But one issue that often gets lost in the public discussion is how different flibanserin is from "male Viagra" — mainly because the nature of men's and women's arousal and sexual desire is so different.

Viagra works by helping the arteries of the penis dilate, allowing men to achieve erections more easily. The drug is taken shortly before a man plans to have sexual intercourse. Viagra helps men who are already turned on have sexual intercourse — however, it doesn't do anything to help a man become more aroused or interested in sex.

Flibanserin, on the other hand, works in a matter similar to an antidepressant — it's taken daily, and "the combination of 5-HT receptor binding increases downstream release of dopamine and norepinephrine while reducing serotonin release in the brain circuits that mediate symptoms of reduced sexual interest and desire," according to a 2015 paper by Stephen Stahl, MD, PhD, a psychiatrist and pharmacologist at the University of California at San Diego. It's used to not treat a physical issue, but a psychological issue — a lack of libido known as female sexual interest and arousal disorder (FSIAD).

So why is "female Viagra" basically a mental health med, while male Viagra just helps with the mechanics of sex? Chalk it up to these three differences between how male and female arousal functions.

1. Female Desire Can Be "Responsive"

Many of our ideas about how sexuality in general functions come from the study of male sexuality — which is how many of us came to the conclusion that all sexual desire is spontaneous, the way male desire often it. For most men, the desire for sex and feelings of arousal usually come before any sexual activity — and thus, those feelings drive the search for actual sex.

For women, however, this is not always how sexual desire plays out. Of course, many of us have experienced the random, free-floating horniness that is associated with men's sexuality — some of us quite often; but many women also experience what Emily Nagoski, sex expert and author of Come As You Are, calls "responsive" sexuality. Nagoski — who opposes classifying women's low sexual desire as a medical disorder — claims that our current model of sexuality only classifies desire as normal when it "comes out of nowhere." But in Nagoski's studies, many women work from a model of sexuality where sexual, sensual or romantic contact — touching, kissing, talking — sets desire and arousal in motion, rather than arousal and desire predating any contact. Nagoski estimated that, while all of us probably have experience in both the spontaneous and responsive flavors of sexuality, about one third of women work primarily from the responsive model. This not only makes male sexual responses a bad model to work from when examining these kinds of sexualities — it raises many intriguing questions about what constitutes "normal" levels and styles of sexual desire.

2. Women Can Get Bored By Monogamy Very Easily

Most of us have been raised with some variation of the idea that women are biologically prone to monogamy and men are biologically prone to playing the field, leading to the hilarious slow-motion car wreck that many of us call "heterosexual dating." But research is finding that not only is this assumption way off base — it turns out that women are actually the ones who are turned off by being tied down.

A 2012 study of monogamous, heterosexual couples published in the Journal of Sex & Marital Therapy used something called the Female Sexual Function Index to rate each female partner's desire for her male partner. The study found that, after the first nine months of the relationship, women registered a 0.02 point drop on the Index for every additional month she and her partner stayed together — meaning, a drop in sexual desire. Men did not show any comparable drop in desire for their monogamous partner.

Some traditionalists have claimed that this information just proves that women are so hardwired for monogamy, they stop even caring about sex after a few months — a point at which, biologically, they would turn their attentions from sex to child-rearing. Other theorists, luckily, have called this claim out for the load of rich creamery butter that it is, pointing to the vast and diverse sexual appetites of many female primates as evolutionary proof that females stay interested in sex, even after they bear offspring (duh).

So the facts may be that women don't "go off" sex over the course of a long monogamous relationship, as pop culture has long lead us to believe — rather, they just "go off" being aroused by the prospect of more monogamous sex with the same partner. This will make quite the talking point when your family gangs up on your over the holidays to ask why you're still single, right?

To go back to male Viagra for a second — when it comes to male sexuality, the biggest concern is often making sure that the genitals function in a certain way. Psychological and physiological arousal — that is, physical and mental arousal — exist as separate quantities among both men and women, but in men, they're viewed as being intimately related. An erection, for instance, is seen not only as a necessary tool for a man to have most kinds of sexual interactions, but a symbol that he is aroused — which is why so many women feel undesirable when they encounter a male partner who can't achieve an erection.

This connection is, of course, not absolute — men do get involuntary erections, and men often can experience impotence despite feelings of desire — but for many women, there's much more of a distance between how aroused they feel and how aroused their genitals appear. As Dr. Jordan Rullo, a sex therapist at the Mayo Clinic, told Men's Health, men experience a connection between their psychological and physiological arousal about 70 percent of the time — while for women, the connection is there less than 30 percent of the time. Meaning, in the vast majority of sexual experiences for women, feeling wet or engorged doesn't necessarily mean that the woman is emotionally aroused or ready to have sex — and that feeling dry and tight in the vag doesn't mean you're not turned on as hell (a confusing experience that I personally have lived through many, many times).

What does all of this mean for you (besides "pretty much everything I have been told about how sexual arousal operates is a lie")? It depends; but if you're struggling with a low libido yourself, it may help you understand your options, and get a better idea about how to help yourself.