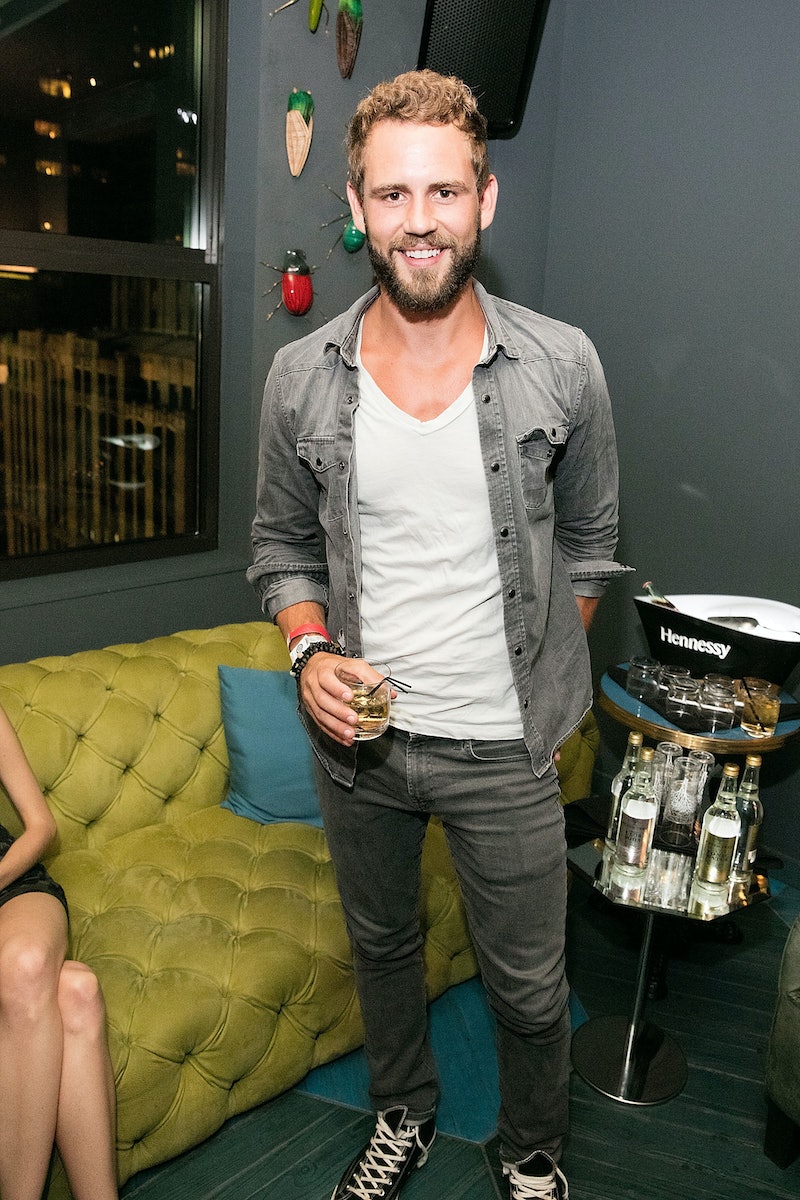 Another week, another amazing new set of episodes of Bachelor in Paradise. This week, the cast turned against Joe and Samantha, and everyone seemed to stand behind Juelia. The drama was at a high, and no one knows bringing drama to the Bachelor franchise like Nick Viall. For the first time, Nick took over the Bustle app to react to Bachelor in Paradise , and let's just say, it was no disappointment. Nick did not hold back sharing his feelings about Bachelor in Paradise, which made this Bustle app takeover even more amazing, because let's be honest — we were all screaming at the TV when Sam was trying to convince Joe to lie about their pre-show contact.

So what does Nick have to say about the cast on Bachelor in Paradise? Is he rooting for JJ — JJ, the guy that arguably took only slightly less heat than Nick did on Kaitlyn's season of The Bachelorette. Is he professing his love for another Bachelorette contestant who can't seem to stop crying? We've got the highlights from Nick's Bustle app takeover to share exactly what he thinks of the contestants on the show.

So without further ado, I present: Nick Viall's take on Bachelor in Paradise, via his Bustle app takeover.

I look like Chris Harrison plotting when I start watching this show too, Nick.

He Thinks Joe Is "Villing" On Bachelor In Paradise

I believe the men have called what Joe is doing "villing."

He Can Appreciate A Sneaky Camera

Those cameras and microphones that follow you around everywhere will get you, won't they? Nick is all of us when this nightmare of a conversation happened.

His "Proceed With Caution" Point-Of-View

While I can say I'd love to see Nick complete a trifecta of appearing on three different seasons of a Bachelor franchise show, I can't blame him for being less than enthusiastic about appearing on Bachelor in Paradise.

"Ashley S. is done dating in Paradise and is back to her more lovable crazy-as-f*ck self," says Viall. Ashley's too good for Dan Cox anyway.

He Is A Supporter Of JJ

Yup, Nick is not surprised that JJ was the Bachelor in Paradise "hero" of the night.

He's A Fan Of Ashley I. But Makes One Thing Clear

Let the record show that this proclamation of being an Ashley I. fan does not mean Viall wants to date her. For now.

Joe, Stop Trying To Make "Vill" Happen, It's Not Going To Happen

Sorry, Joe, but just like fetch, "vill" is just not going to happen.

He's Got Chris Harrison's Back

Nick knows you do not mess with the hand that feeds you (a.k.a. Chris Harrison).

He Knows Juelia Is Too Good For Bachelor In Paradise

Truer words have never been spoken. Juelia doesn't need this.

For more Bachelor in Paradise coverage, you can download the Bustle app on iTunes.