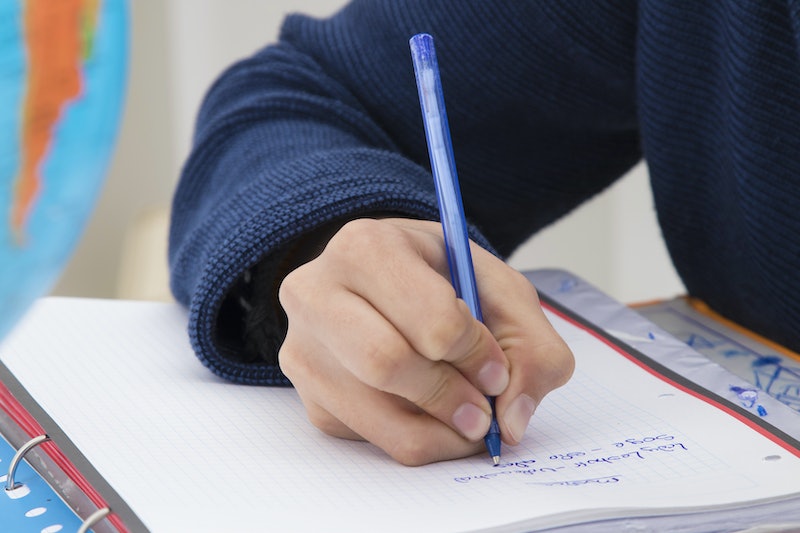 We've all been there: You check out a book from the library only to accidentally bend the spine or spill tomato sauce on a page. I usually settle for feeling vaguely guilty and going about my day, but from now on I may have to follow in the footsteps of a Canadian boy named Jackson, who found a particularly adorable way to make up for damaging a library book — an apology note.

Apparently, young Jackson fell asleep while reading his borrowed Asterix comic and accidentally ripped one of the pages. Despite attempting to repair the damage with tape, he felt so bad about the incident that he included a handwritten apology when he returned the book. (It seems somewhat more likely that his parents told him to write the note, though it's admittedly less entertaining to imagine.)

The note reads as follows: "I am sorry that a page ripped when it fell out of my bunk when I fell asleep reading It won't happen again. I'm sorry from Jackson."

Librarians at the main branch of the Toronto Public Library were delighted to discover Jackson's handwritten apology and posted a photo on the library's Facebook page. They're planning to hang the note somewhere in the branch.

Librarian Eila McLeish told Global News, “We get ripped books all the time, so we were just like, ‘Oh that’s so nice!’ And to have it from the child, who obviously wrote it himself – we just thought it was really sweet.”

McLeish also wanted to reassure young readers not to worry too much should something happen to a book. "We understand that accidents happen," she said.

So there you have it: Don't be too concerned if you rip a page in a library book, but do consider writing the librarians a nice apology note.