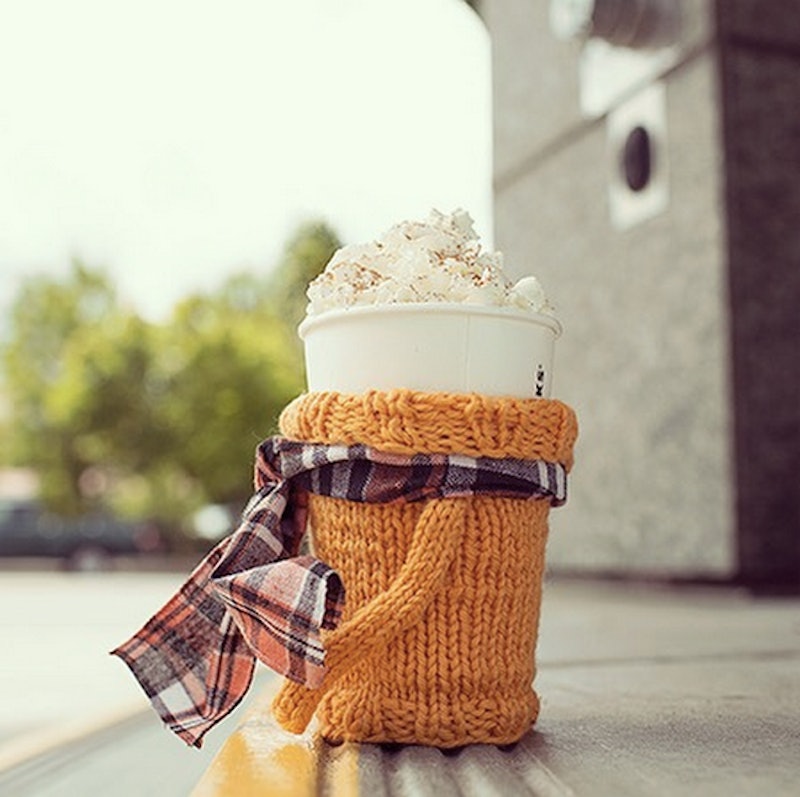 "Hey now, hey noooowww, my boyfriend's back!" Oh. *clears throat*. Hey there, friend. I was just busy singing about my boyfriend, the Pumpkin Spice Latte. (Actually, I call him "PSL" for short. It's kinda our thing!! I KNOW, we're such dorks, right?!) Anyway, as you all know by scrolling down your friends' Instagram feeds in autumn, my boyfriend's kind of a baller. I mean yeah, long distance has been rough for the past eight months (he has very important pumpkin related things to do), but ours is the kind of love that will endure any test of time. Even if he hasn't made it social media official or followed me back on Twitter. (NO PRESSURE, punkin!! I STILL LOVE YOU!! ... call me back.)

I know what you're thinking. Why would I date an anthropomorphized hot beverage instead of a real person? HAHA, you sound just like my mom! Really guys, I understand that people have a hard time accepting what they can't explain, but that's just it — I can explain our love. Actually, I think you'll find after my extremely logical line of reasoning that you too have the hots for our favorite hot drink (but back your basic self up, because he's still mine). Here are all of the reasons a PSL is better than an actual boyfriend, sorry not sorry, human race:

He Never Complains About Posing With You In Selfies

LOOK at him. So dapper. So cooperative. Human boyfriends are like, "Ugh, Janet, this is the 46th selfie we've taken, just pick a filter and put both hands on the wheel, would you?" But the PSL knows you're feeling your look. He's feeling his, too.

He Literally Knows How To Turn You ~On~

Call me when humans have enough caffeine to get you through the 3 p.m. slump and THEN we'll talk.

You're Both Into The Same Kind Of Threesomes

I've invited many a pumpkin muffin and chocolate chip scone into our lovemaking with nary a complaint.

He Is Made Of REAL PUMPKIN

ICYMI, Starbucks announced that this year the PSL will have real pumpkin in it. Do you know how many times I've dated human men and the realized they have zero percent pumpkin in them? ALL THE TIMES. Don't fall for this human trickery. Stick with the PSL you know.

In fact, he's going to be such a gentleman that everyone will totally forget what your ex Steve did to that lamppost last summer. (Maybe.)

He's Confident, But Not Cocky

The PSL has roughly the composite ego every Zac Efron movie character that ever existed.

Or at least you assume he does. It's not like he ever objects. Plus he never asks you if you wanna ~do stuff~ right in the middle of your very important 14th re-viewing of Parks And Recreation.

Your Parents Already Love Him

Possibly more than they love you.

He Makes Promises He Can Keep

Oh, darling. I'll #WaitForever, if that's what it takes.