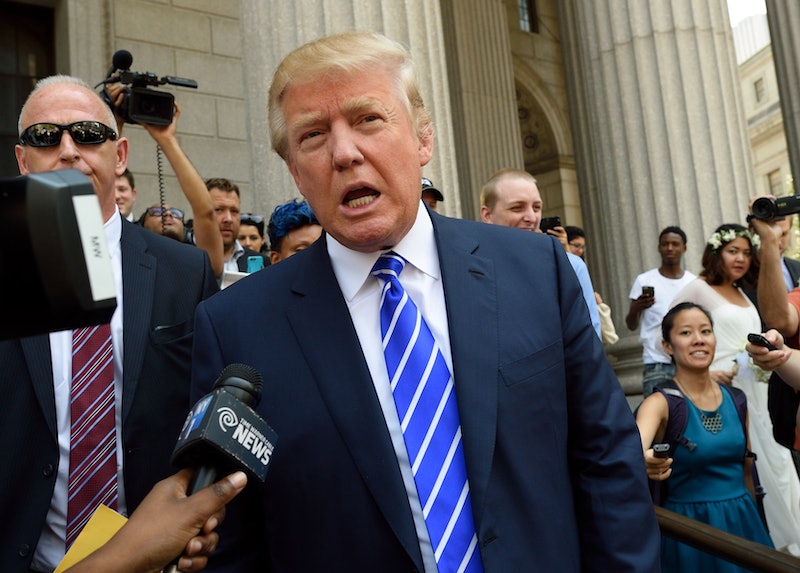 With each passing week, his continued presence atop the Republican presidential primary field grows more and more conspicuous. That's right, I'm talking about Donald Trump — the man who's managed to push the entire GOP's entire conversation on immigration to the far-right fringe. For example, he's now calling for an end to birthright citizenship. It's a dubious achievement, to be sure, and Trump is no stranger to those.

Trump's current stranglehold on first place is being aided by some very favorable circumstances. At present, the GOP presidential field is absolutely overloaded, boasting a 17 different candidates. And though some of the campaigns are clearly hopeless affairs — like those of Jim Gilmore's and George Pataki's — the early, highly fractured levels of support for other candidates is allowing the ever-controversial Trump to sit pretty. He's the only one polling above 20 percent.

But bamboozling the field and getting off to an early lead isn't the only accomplishment he's notched so far, not by a long shot. Here are five more dubious things Donald Trump has accomplished, which could surprise even the most jaded observers of political absurdity. Isn't it bizarre how one person's achievement would be another's misfire?

Donald Trump is not a modest man. That's maybe the single truest, most transparent thing you could say about any of the 2016 candidates — Republican or Democrat. Simply put, the guy likes attention, and likes seeing his name plastered on things: Trump Tower, his Trump-copter, his Trump jet, you name it.

Before Trump actually dove into the 2016 race, he had something of a reputation for flirting with a presidential run and wallowing in the media attention it brought. Now he's done one better: He's actually running. And the punchy, occasionally mocking coverage he used to get seems like its been shot full of steroids.

Not only must this be very satisfying for him personally (he'd been crowing for years that he'd be a sensation if he ever ran), but it also carries enormous political advantage.

2. ... Because You Can't Just Ignore The Frontrunner

Perhaps the strongest reason Trump gets so much attention? Because he deserves it. Seriously. In spite of The Huffington Post's efforts to relegate him to their entertainment section, the guy's got a double-digit lead above everyone else in the race so far, and his policy positions are clearly dragging his rival candidates to places they wouldn't have otherwise gone. In other words, he's setting the terms of engagement for the field right now, so all the complaints about him being over-covered have really lost their footing.

When a presidential candidate is in the position Trump is — top dog, even if it isn't expected to last forever — that's a big political story, regardless of whether it irritates you to admit it. Whatever you think of Trump's politics, he's thrust himself into the process so successfully that political media really can't credibly stop covering him.

3. He Hasn't Apologized For Anything ...

For most people, an apology is a routine conscientious act. You realize that you've done something wrong, or said something wrong, hurt somebody needlessly. So why not throw an "I'm sorry" in there and express a little deeply felt remorse?

But Trump is clearly a different kind of animal; a guy who's made a steadfast decision to never back down. At each critical, high-profile juncture in his campaign — his derogatory comments about Mexican immigrants, his attacking of John McCain's war record, his sexist boorishness toward Fox News host and debate moderator Megyn Kelly — he's straight-out refused to offer any apologies. In fact, he actually demanded an apology from Kelly; one which will almost certainly not be coming.

4 ... Because His Ridiculous Image Grants Him A Long Leash

When you're a billionaire reality TV star jumping into the political game, you start with at least one advantage: People will recognize you, and they might not take you too seriously. As such, no matter what wildly offensive thing Trump's said, he's seemingly immune to the sort of pressures of public outrage that other candidates crumble under.

Imagine if Sen. Barack Obama, running for president back in 2008, had mocked John McCain's war record. Or if Mitt Romney had blamed his 2012 debate performance on moderator Candy Crowley menstruating (Trump denies that this was what he meant when he said that Kelly had "blood coming out of her wherever"). Hell, imagine if another candidate on the stage — Jeb Bush, for instance, — had broad-brushed Mexican immigrants as drug-addled rapists.

In each and every case, campaign staff would've been typing up retractions and apologies before the sentence was out of their mouths. But by refusing to ever apologize for anything, and embracing the on-camera persona he's cultivated for years, it seems like Trump has largely ducked this entire give-and-take.

5. He's Proving That You Can Run For President While Being A Virulent Twitter Troll

Donald Trump is a pretty crude guy on social media. This is precisely what Kelly was asking him about when he decided to launch a post-debate crusade against her online, calling her a "bimbo" through a retweet and making those aforementioned comments about her "blood."

And lo and behold, what happened at just the same time? Hordes of apparent Trump supports rolled out of the woodwork, harassing Kelly with all manners of insults, up to and including death threats.

As Vox's Max Fisher details, the social media reaction is somewhat evocative of the Gamergate fracas that's been going on for more than a year now. In simple terms, Donald Trump could very well be our first Gamergate president — if he didn't hate video games, that is.