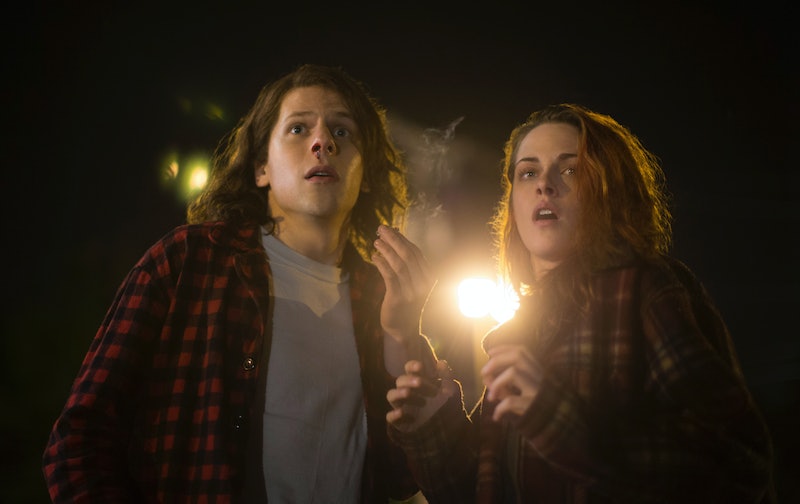 American Ultra sounds like it's a big-budget patriotic blockbuster with a huge action star like Dwayne Johnson, Bruce Willis or Vin Diesel. But alas, it's not that kind of movie, nor does it star a big marquee name that you would associate with explosions, gunfire and sweaty, manly biceps. However, it is an action movie — specifically, a stoner action comedy starring Jesse Eisenberg and Kristen Stewart. In fact, it seems like the polar opposite of a high-octane summer blockbuster filled with testosterone... which is probably why it might be the unlikely action hit of the summer. Based on the trailer, Eisenberg plays a stoner that is "programmed" to kick some major butt — all set to some high adrenaline music. Although you're not able to buy the American Ultra soundtrack just yet, I'm hoping it will hit the shelves soon.

In the film, out Aug. 21, Eisenberg plays Mike, your atypical template of an action star. He's a stoner, unmotivated and doesn't exactly have the ripped bod expected of an action hero. One thing he doesn't know is that he is a sleeper agent for the CIA. When his handler (Connie Britton) activates his deadly skills, he becomes a target for termination. He's like James Franco in Pineapple Express crossed with Jason Bourne. He's the Stoned Supremacy, and he's joined by Kristen Stewart who plays his girlfriend Phoebe. She is just as much of an atypical action star love interest as he is a hero. Based on the trailer, the soundtrack matches this blend of action, awkwardness, hipster flair and stoner sensibility.

The trailer includes some bangers that you would hear at a Vegas outdoor pool party, such as the fist-pumping "Freaks" by Timmy Trumpet. It's hip song, and has a revolving thumping bassline that builds to a beat that makes everyone lose their minds. If this is a taste of what else is included on the soundtrack, then I'm guessing we'll be getting a lot of "untz-untz" blended with stoner-friendly undertones.

But the centerpiece song of the Ultra trailer is David Guetta's "Hey Mama." At first, I thought the voice singing "Hey Mama" was Rihanna, but I was unforgivably wrong when I found out that it was Miss Anaconda herself, Nicki Minaj. The song also features Bebe Rexha and Afrojack, which results in a blend of dance hall, world music, untz-untz electronica, hip hop and even a taste of soul — it's pretty much a blend of stuff that matches that genre mashup that is American Ultra.

"Hey Mama" seems to be the anthem for American Ultra. Not surely why, but it is a good song that serves as a proper jumping off point for the entire soundtrack. It's sure to satisfy action movie heads, comedy nerds and stoners alike.