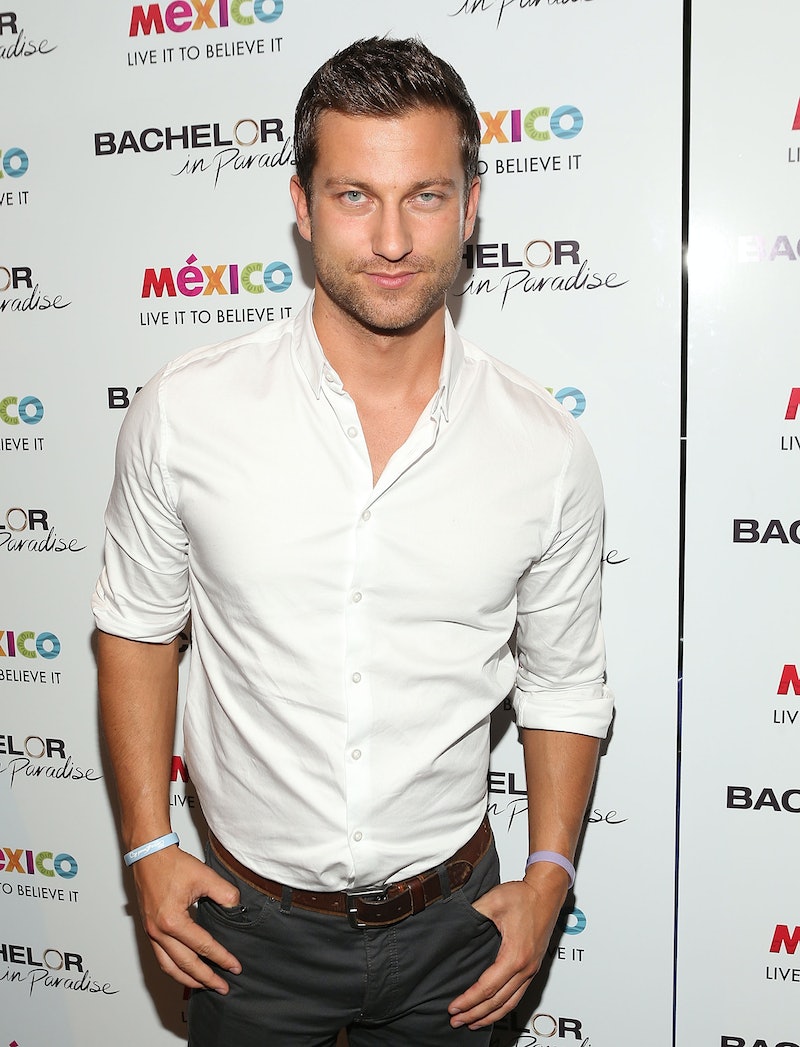 It feels like just yesterday that Chris Bokowski tried to crash Andi Dorfman's season of The Bachelorette . But, alas, time has certainly passed — and even a season of Bachelor in Paradise. Now that Season 1 Bachelor in Paradise star Chris Bukowski was shown in a preview re-emerging on the show this season, (I mean, he's been on every other show, so why not this one?), what has he been up to see we last saw him? To refresh your memory, he didn't stick around for long last season — The 28-year-old hurt his knee and left with Elisa Mosca, who he briefly dated, but it didn't work out. According to a recent tweet, he is — and I quote — "single as F."

The professional show crasher hasn't had a whole lotta luck in Bachelor nation, but he keeps coming back for more. He first appeared on Emily Maynard's season of The Bachelorette and then lied his way through Bachelor Pad 3 . After that, he tried very hard to get cast on Andi's season — meaning he allegedly camped out outside Bachelor mansion for a week until Andi eventually turned him down. But, then there he was again on Bachelor in Paradise, where he hurt his knee and left with Elise Moca. Unfortunately, their love didn't last. "I broke it off because we were at two very different points in our lives," Bukowski told Cupid's Pulse. "I wasn’t confident that Elise was the right girl for me and didn’t want to lead her on to believe anything different."

So, since he's joining BiP for round two, here's what he's been up to in the meantime.

That's the tweet of a man on the prowl. Sounds like he will definitely be looking for love if he arrives in Paradise.

He Owns A Sports Bar That Does Bachelor Viewings

The entrepreneur owns the Bracket Room sports lounge in Arlington, Virginia, which also happens to host Bachelor nation viewing parties. Sometimes there's even a special guest or two. The bar is coming up on its second anniversary and has plans to open other locations in Washington, D.C. area airports.

He Had The Greatest Time At His Sister's Wedding

A few weeks ago, Chris posted about attending his sister Renee's wedding and it looks like he had a blast supporting her. He even caught her garter in the toss.

He's An Investor In A Dating App

According to his LinkedIn profile, he's currently an investor with an app called The Catch. His description of the app is that it's "a female-centric dating app that provides a safe space for women to screen men. It’s a unique game in which one woman invites a small group of men to compete for a date. Through successive question and answer rounds, the woman narrows the pool of male contestants based on her satisfaction with their replies." Sounds interesting, and a lot like The Bachelorette.

He's The Director Of Rant

Chris is also the director of Rant, a collection of online media sites that deal with sports, lifestyle, and entertainment. "Known for the well-established brand RantSports, Rant, Inc. has recently launched RantLifestyle and RantChic to expand its reach towards the areas of lifestyle, fitness, exercise, entertainment and celebrities," says his LinkedIn profile.

He's Been Spending Quality Time With His Dog

What will be Chris be up when he returns to Bachelor in Paradise? I can't wait to see.