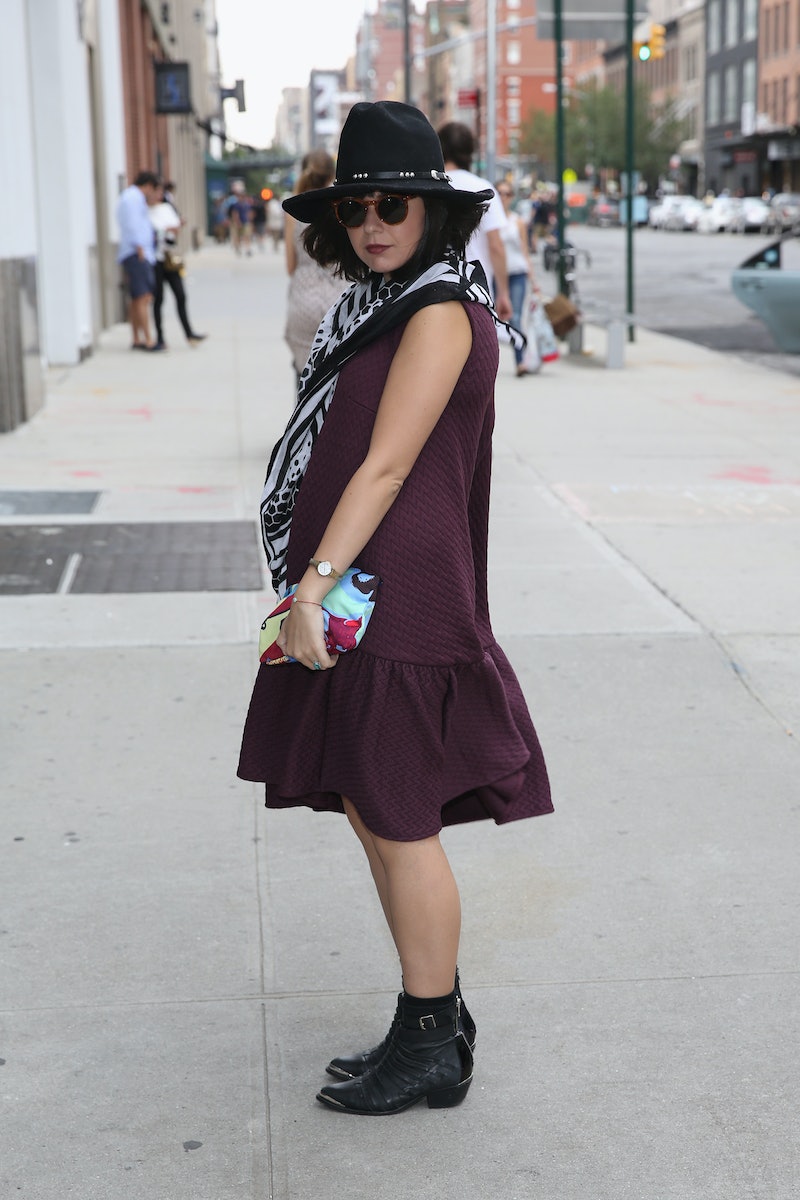 It's tough to realize you've been hoarding clothes you never want to wear and ignoring all the signs that it's time to upgrade your wardrobe. It can be hard to admit that a quarter of the clothes you have hanging in your closet no longer work. There's guilt over the fact that you spent rent money on them, and that feeling tangos with a fear that you might want to wear that dress from 2005 on a random Wednesday seven months from now.

So you turn a blind eye and make yourself believe that you just might reach for that one peasant top you sort of hate, or that you'll find a way to style that confusing embellished pencil skirt next season. But by doing that you're only making things harder for yourself because the more options you have, the less you wear. This means you're detracting attention from the truly amazing pieces in your wardrobe that can really make you look fabulous. So how do you know when enough is enough? How can you nudge yourself into admitting that it's time to retire one piece and upgrade another? First, take everything out of your closet and get ready for some tough decisions. Then, follow these seven signs that it's time for a wardrobe upgrade and the process just might get easier.

1. Put Everything That You Don't Totally Love Into One Pile

You know how you have certain pieces in your closet that make you kind of want to do Sound of Music-esque twirls down your hallway? Those are your ace purchases; the items that truly speak to your style and get you excited to get dressed in the morning. Now imagine if you had a whole closet full of them. This can be done. Be brutally honest with yourself and separate every piece in your wardrobe that doesn't spark those feelings. Granted, let a lot of basics through (I don't know if a collared shirt ever made me feel like waving sparklers), but do swing the hammer if a particular basic staple just doesn't make you feel your best. You can always upgrade and replace it with a better, more interesting version.

If you're brave enough to admit which pieces just don't make you feel anything, you'll cut a lot of the excess out of your wardrobe. After all, it's better to have few pieces that you truly feel beautiful and like yourself in then a ton of pieces that make you just feel lackluster.

2. Accept That There's No Such Thing As "One Day"

Are there pieces in your wardrobe that you keep skipping over, thinking that maybe you'll wear them one day later? Maybe you just don't have the right top to pair them with, or the perfect pair of shoes. Or maybe it's been hanging in your closet with its tags still on for three years now. It's time to face the music, my dear: That piece needs to go. It's never going to happen, and if it does, it'll only happen a handful of times. An item that gets worn once a year doesn't deserve room in your wardrobe.

3. Keep Your Lifestyle In Mind

We all have made shopping mistakes where we bought pieces that didn't keep our lifestyles in mind, and so they never worked out. You bought a piece that focused on how you hope to be one day, rather than buying a piece that keeps in mind who you already are. Maybe you invested in a killer pair of heels, when in reality you're a sneakers and shorts kind of gal. Or maybe you bought a tight little mini dress when you actually live in your boyfriend jeans. Whatever it was, it was wishful thinking. And it's also a constant reminder that you want to be different than you already are — why would you want that in your life? Love who you are now and weed out anything that's supposed to fit you in an alternate universe. You've got a lovely life now, and you shouldn't have anything that detracts from appreciating that.

4. Toss Anything That's Worn Out

Do you have a dress that's unraveling at the hem, sweaters that are piling, cardigans with little holes along the back? Maybe sandals with scuffed toes, or pants that just don't fit right anymore? Chuck 'em. If you can notice those details, then other people can notice those details. If you really loved a particular style then you can find it again with some clever store hunting— you won't feel good wearing it in all its run-down glory so there's no use in keeping in. Say your goodbyes and make peace with it.

5. Toss Anything That Feels Dated

Trends change in the blink of an eye and, even more maddening, sometimes trends evolve with little tweaks that make a big difference. For example, palazzo pants became high waist wide pants, which in turn became high waist bell bottoms. Or crop tops became turtleneck crop tops, which later became racer crop tops. So if you have one of the earlier models, they could feel a little off when you put them on, which doesn't give you too much pleasure when dressing up. Walk through your closet and donate anything that feels passe. Chances are you wouldn't wear it too often anyway, so you might as well make room for the pieces you were originally going to reach for.

6. File Down On Duplicates

We're all guilty of it: There's a certain style that we love and we keep buying duplicates, triplicates, quadruples of it. For me, it's anything striped. For one of my friends, it's black leather murses. But the bottom line is that you absolutely do not need 12 different versions of the same thing. A piece is supposed to be invested in because it makes you feel something — and if you have a handful of pieces giving you the same feelings and contributing the same vibes to an outfit then, well, it's redundant. Pair the collection down and give yourself a chance to introduce items that will add different elements to your outfits.

7. Ask Yourself: If This Was In Stores Now, Would I Buy It?

This is the easiest way to plow through your excuses. Ask yourself this simple question: If this was in stores right now, would I buy it? Would I at least walk over to it? If the answer is a strong no, then you know that you're just not into it anymore. Maybe it's because it doesn't fit your style anymore, maybe it's because it feels outdated, or maybe because it feels straight up rundown, but whatever the reason is it just doesn't fit in your wardrobe any longer. Put it in the "no" pile and make room for those pieces that do.

You'll have a more organized, better wardrobe in no time and you'll feel less guilty not having to look at those "I spent so much money on this, but I've never even worn it" pieces.