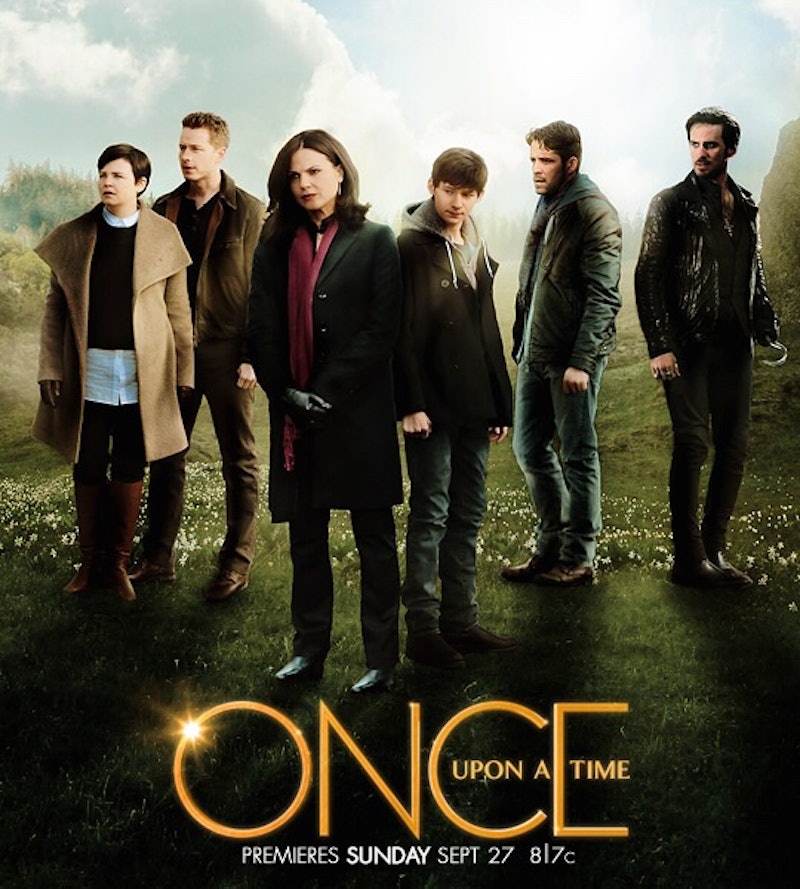 It's hard to believe that the premiere of Once Upon A Time Season 5 is still more than a month away. It feels like we've been waiting absolutely ages to find out what's going to happen with the Dark Swan storyline, and while September 27 is drawing closer by the day, it's still way too long to wait — especially when you're a hardcore fan with a short supply of patience, like me. We'll get there eventually, and in the meantime we can drive ourselves crazy with endless theories about what's going to happen and how it's all going to play out. We might be completely wrong when the episodes begin to air, but hey, it passes the time, right?

Anyone who's been dedicated to Once knows that it can be a really frustrating show to watch at times, and an inconsistent one, as well. With so many characters and storylines, there's an endless amount of potential for some great things to happen. Sometimes that potential is squandered, at least in my eyes, which is maddening and makes me want to quit watching. Will I ever? Obviously not — I'm obsessed, not stupid. I'm in it for the long run, and I can't wait to see what happens in Season 5.

If you're also ride or die for Once like I am, here are the stages you've probably been going through leading up to the season premiere.

After "Operation Mongoose: Part 2", I was pretty devastated, not only because the show was going off the air for several months, but because Emma had sacrificed herself for Regina and that just broke my heart into a million pieces (#SwanQueen for life, and all). How was Henry going to feel? How would Regina feel? How would Snow, Charming, and Hook feel? How were they going to get Emma back? Ugh, my heart.

There were a few things that irked me about the end of last season. Zelena coming back out of nowhere when she was meant to be dead was pretty blah, even though Rebecca Mader is lovely and wonderful and I'm glad to have her back now. The fact that Belle dropped Will like a bad habit since Rumple's black heart was exposed was also obnoxious. There were just a few things that didn't sit well.

Emma becoming the Dark One is a really tough cross to bear and all, but it also has loads of potential for tons of character development and serious drama. How dark will Emma go? Will Regina's 180 from villain to hero finally be complete? Will Snow and Charming grow a proverbial pair and start doing stuff again? I don't know, but I have hope — the heart of the truest believer, you might say — and isn't that something?

I won't even tell you how these post-4B WIPs (that's "work in progress", for the uninitiated) I've got bookmarked, and how many classics I've gone back to read for the first time (and some for the second time). Sometimes when there's nothing actually on the TV, you've got to get creative. Half the time, the Once fanfic is better than the actual show, anyway.

Maybe it's all the fanfic I've been reading, but I'm actually really excited about Season 5. It's going to be a great year for Emma and Regina — and from the sounds of it, for Belle and Merida, too — and I can't wait to see how it all plays out. Bring on September!

No seriously, bring on September. What's taking so long? I know all shows go through a lengthy hiatus, but given that we'll only get 10 episodes before the WINTER hiatus, I'm kinda over this waiting thing. Can we get this party started, or what?

No matter how high your hopes are for next season, chances are Once will fall short in some way or another — particularly because we all want different things out of it. In a perfect world for me, Emma and Regina would get together since they're obviously meant to be, Guyliner and Robin could bro out for eternity, Belle would kick Rumple to the curb for good, and Ruby would come back, because she was awesome. Is that so much to ask?