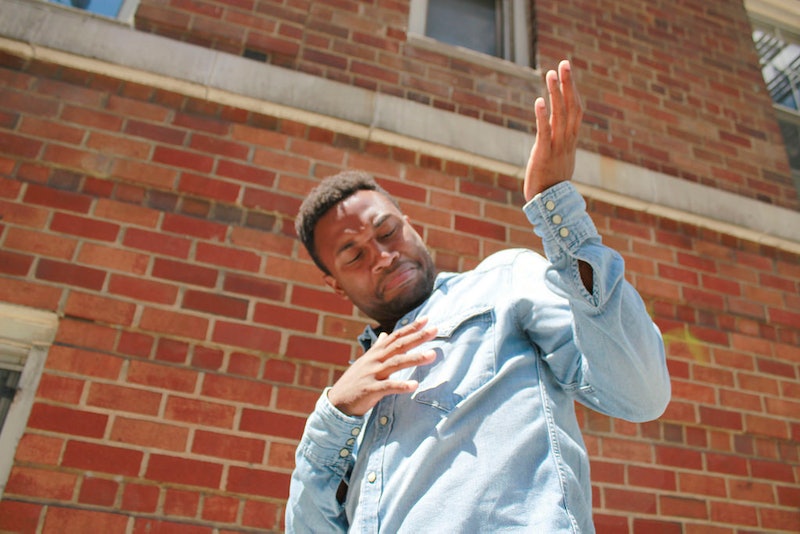 Stock photos are, by and large, ridiculous. You know this; I know this; and all those women laughing alone with their salads definitely know this. So, in order to combat the inherent silliness of most stock photos WNYC recently put together their own series of stock photos depicting life in New York City — except that instead of featuring generically beautiful people living what looks like the most perfect city existence anyone could possibly imagine, it features real New Yorkers in real New York situations. Because let's face it: You're much more likely to see Man Trying to Figure Out What Just Dripped on Him walking around New York than you are Smiling Young Man Leaning on Old Brick Wall.

Much has been made of the aforementioned Woman Laughing Alone With Salad meme; roundly mocked for both their absurdity and sexism, they represent the worst qualities of stock photography. (Seriously — who the heck actually sits there, laughing in delight at their greens as they get ready to shove them into their gaping maws? No one. That's who.) Accordingly, a variety of responses have emerged in recent months, from the Drug Policy Alliance's realistic stock stoner images to a promo for the movie Unfinished Business consisting of stock photos starring Vince Vaughn and Dave Franco. Sheryl Sandberg also famously partnered with Getty Images to create a series of stock photos that portray women in a more positive way.

WNYC's New York City stock photos are the latest of the bunch, and — dare I say it? — they're also the funniest. Inspired by, as WNYC Data News Senior Editor John Keefe put it, “the cheesiness of the pictures and their weirdly descriptive titles,” the photos depict not the idealized image of city life, but rather the common struggles of urban swellers. Data News Producer Jenny Ye described the goal as being to “counter typical stock photos of New York City with images of real city life.” They star WNYC staffers and interns instead of professional models — and they're licensed under Creative Commons, so you don't have to shell out any extra cash to use them (a rarity for stock photos, almost all of which require a fee to use).

The best part? While they'll definitely hit home for people who actually have lived in New York, they'll also ring true for anyone who has spent a substantial amount of time in any major city. Do you recognize these situations? Because I sure do.

Head on over to Flickr to see the full New York stock photo set.

One dollar pizza may not be the best pizza (unless it's two o'clock in the morning and you're drunk), but it's definitely the most affordable pizza. Does that make it worth smiling about? I'm not really sure, but maybe for some people, it does.

Because if you're not confident, you'll be waiting on the curb for an opening until the end of time.

3. Man Trying to Get a Citibike Out of a Broken Dock

The struggle is real. Literally.

4. Woman Threading Through Traffic Because Cars Are Blocking the Box

Is it really that hard to stop before you hit the middle of the crosswalk, Inexplicable Car Owners of New York?

5. Stealing a Taxi with an Upstream Hail

All is fair in love and trying to get a dang taxi during rush hour.

6. Woman Looking for MetroCard and Blocking Turnstile While People Wait to Enter

I haven't been this particular lady, but I have been that person who keeps having to swipe their card a zillion times at the turnstile because the reader keeps telling me to. To everyone I have ever made miss a train in this fashion: I'm sorry.

7. Woman Eating Takeout on Subway While Man Gives Side Eye

8. Woman Crowded by Manspreading on Subway

Meet the Face of Manspreading.

9. Woman Texting at Top of Stairs While Others Try to Exit

Look, I realize that a lot can happen when you're underground, some of which is actually important — but unless the world is ending or your grandmother fell down some stairs or something, can you please at least wait until you're off the stairs to start texting? Walking while texting may not make you trip, but it does slow you down — along with everyone else behind you.

10. Man Trying to Figure Out What Just Dripped on Him

Hint: It's not rain.