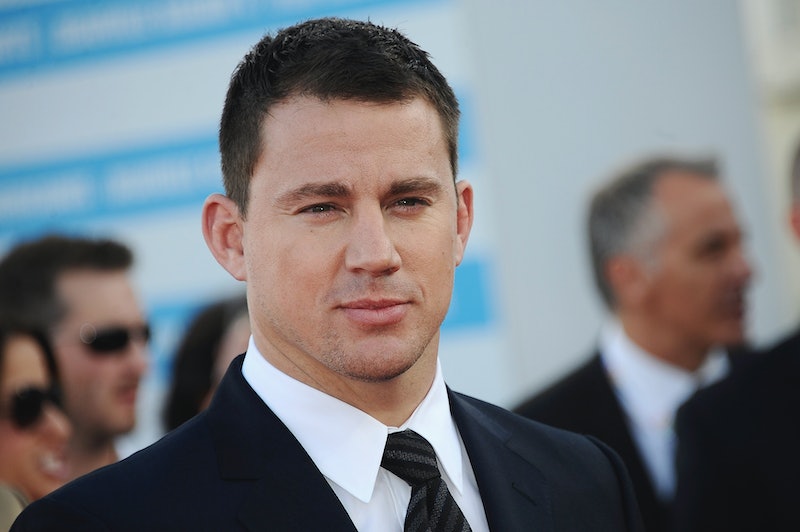 If there's one celebrity who really embodies the best of both worlds, it's Channing Tatum. Obviously, the dude is good looking — I'm pretty sure that you couldn't make up a more swoon-worthy man in your head if you tried — but that's not the only reason why Tatum is so many people's number one draft pick in the celebrity department. He's also a total goofball capable of besting anyone with his crazy-good dance moves: Like, just watch literally any scene from Magic Mike and you'll see why both are true. But, why is Tatum getting attention now? Well, it turns out that Tatum's new pet officially makes him something else: Specifically, a cowboy. Tatum just adopted a rescue horse, and it's officially solidifying his status as a modern-day cowboy.

Yep, in addition to being a dancer, comedic force, and one of the Sexiest Men Alive (People Magazine said so!), Tatum is now a proud horse owner. It looks like his horse is just as cool as Tatum is, because Tatum's new pal is also his new drinking buddy. Horse "Smoke" apparently loves the smell of beer, but not the taste — which is funny, because it's usually the other way around.

Oddly, Tatum's new horse pal isn't the only thing that makes him 2015's cowboy of the year. Here are seven other times Tatum totally deserved the title:

1. When He Trudged Through Rough Conditions

Some call it "going skiing," I call it "exploring the wilderness."

2. When He Tamed Wild Animals

I mean, have you ever tried to hold a puppy? They just flop all over the place!

3. When He Walked Alone Into The Wild

OK, OK, so he wasn't exactly alone: he was on Bear Gryll's TV show Running Wild.

4. When He Totally Bested Nature

Because a true cowboy doesn't play by nature's rules: nature plays by his rules.

5. When He Kept A Secret Weapon In His Jacket

6. When He Had Badass Facial Hair

Your only as good of a cowboy as the quality of your mustache.

7. When He Had An Epic Love Affair

A cowboy walks alone, but he always has a lady waiting for him at home.

Oh, Tatum. I'd follow you into the desert any day.

More like this
Kim Kardashian Father’s Day Tribute To Kanye West Called Him “The Best Dad”
By Stephanie Topacio Long
Dan Levy’s Father’s Day Pic Of Dad Eugene Spoofs The ‘Schitt’s Creek’ Vet’s Past
By Grace Wehniainen
Prince William & His Kids Are Adorable In A Smiley New Photo For Father’s Day
By Stephanie Topacio Long
If You Have A Dog, Trainers Say These 30 Clever Things Will Genuinely Make Your Life Easier
By Dena Ogden
Get Even More From Bustle — Sign Up For The Newsletter