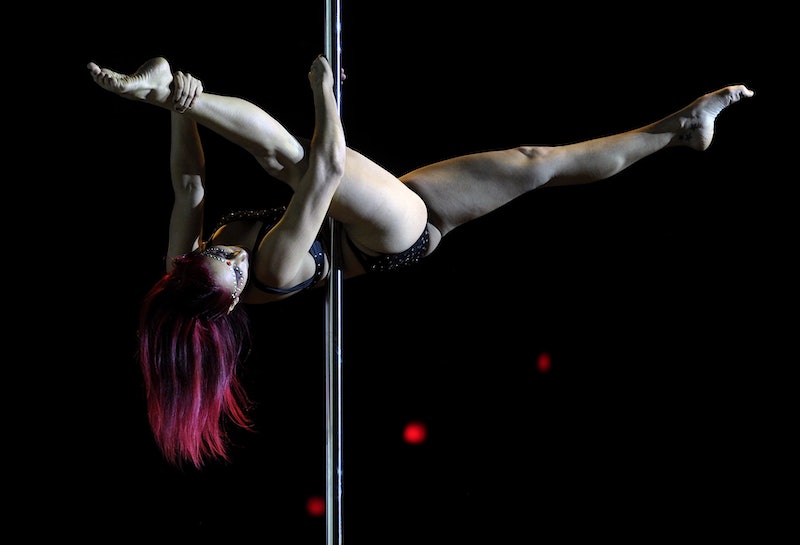 I have a close friend who absolutely loves the strip club. Which is fine, except for the fact that he has a girlfriend – an awesome girlfriend, who I’m willing to bet doesn’t know he frequents these establishments as much as he does. I, on the other hand, can do without the strip club – not because I believe I’m above the exotic venue, but because I don’t understand the appeal in paying for somebody’s affection – it tends to lack a romanticism I enjoy prior to arousal. Also, I’m kind of cheap, and strippers are not. But are strip clubs really that bad for relationships?

Depending on who you ask, my buddy’s affection — and any man’s affection ­—for the strip club could be cause for concern in a relationship. However, to others, the strip club is no big deal at all. So to act as the governing voice on this subject, I spoke with Dr. Chauntelle Tibbals, sociologist and author of Exposure: A Sociologist Explores Sex, Society, and Adult Entertainment to glean her expert opinion.

So why do the lonely flock to strip clubs? "Because being both a good listener and sympathetic is the behavior of any good service provider," Tibbals says. "And part of an exotic dancer’s job is to interact and empathize." Tibbals continues to say that many of the patrons at these clubs are just looking for somebody to talk to, and since a stripper is somebody whose time is being paid for (add to that the fact that they’re also open to sexual conversation because, well, it comes with the territory) these men may feel that since they can’t tell their wives about certain things, (be it a strange fetish, uneven sex drives, etc.) that they might as well tell a woman who will listen. Whether she's being paid to or not.

The last time I went to a strip club (although this was months ago), I went because, after a few brews at a local roadhouse, my aforementioned buddy and stripper lover wanted to head to the strip club to console another friend of ours who had broken up with his girlfriend. At the club, my three buddies (there were four of us altogether) went in and out of the backroom with various strippers as if it were a revolving door and you could literally swipe any invalid credit card through her cleavage and/or butt cheeks.

Seeing that I was sitting on my own for much of the evening, a crimson-haired stripper – who’s song that evening was Marilyn Manson’s “The Beautiful People” – approached me, asking if I’d like a dance. I responded no, telling her my girlfriend wouldn’t be too happy with the idea. However, instead of leaving me for her next source of income, she stayed. In fact, she did more than that. She sat down next to me.

“So how long have you been with your girlfriend?” she asked, seeming genuine. Before long, we were both discussing our new relationships. For instance, I learned that she was leaving next weekend to visit a guy she’d been talking to in Calgary. “He’s kind of nerdy, but we’re both into some wild sexual things, and he’s so sweet,” she said with a laugh. She would also later confess that she is bisexual and had a huge crush on a coworker, who she then introduced me to, and would later go down on on the stage.

Her and I spoke for hours and I gave her no money whatsoever. It was as if our conversation meant more to her than cash that evening. Likewise, I’d told this exotic dancer more about my girlfriend than I had ever told my buddies at the table.

The only reason I can possibly see for this is that she was a stranger, as odd as that sounds. She was a friendly stranger who had shown a genuine interest in my relationship. I could tell her anything; I wouldn’t be judged and nothing would get out – she and I had nobody in common and she had nothing to gain from this mutual exchange of information. As it turned out, it was a damn good conversation. We covered a lot of ground together. So I understand the conversational appeal of the strip club that Tibbals speaks of.

The next day, I told my girlfriend everything about the evening. I had nothing to feel guilty about. My buddy, on the other hand, kept the night’s festivities a secret from his girlfriend, and I was told to not talk about it in her presence should it ever come up. And I obliged.

“I don’t think strip clubs are the danger in relationships,” Tibbals says.

Of course, these conversations serve as the solution. You need to discuss why it is that he goes to these strip clubs when he has you at home – perhaps it'll reveal something you've never known about him or your relationship. But make sure you also talk about your feelings concerning it. Explain why him going to strip clubs makes you feel the way it does.

“You only run into trouble when a partner is unwilling to negotiate,” Tibbals says. Every negotiation requires some sort of compromise, and if he can’t compromise for you – whether he goes to the strip clubs less, only goes on special occasions, or you elect go with him – than that’s something gone wrong in the relationship, you can’t blame the strip clubs.

To draw from the wise words of our expert, we need to shift the blame from strip clubs and instead point the finger at the person indulging. Will this accusation then point back to you? Perhaps, but the discussion will be a hell of a lot more effective than blaming women who are doing their jobs.

It might be easier to blame the dancers, but it isn’t honest to you, or your relationship.