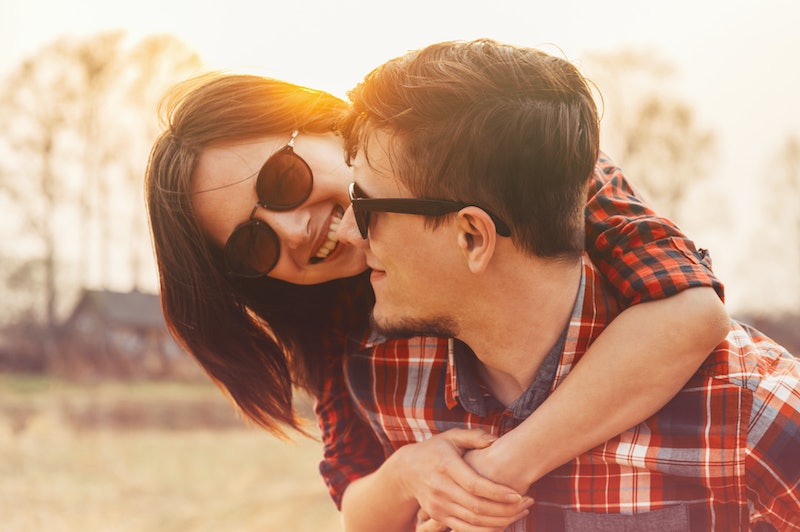 Falling in love is such a big deal that entire movies, books, and Disney characters are constructed around the very idea of it. But what are the signs you're falling in love IRL? It's an exciting (and slightly terrifying) sensation, and although it sometimes seems to happen at first sight, it usually takes a while before we feel the real thing for someone we're dating. Sure, we might feel infatuated with our new flame, but more often than not, a relationship has to become a bit more serious before any feelings of true love start to creep in. But how can you tell the difference between falling deeply in like and falling in love?

It's safe to say most of us know how it feels when we really, really start to enjoy someone's company. We get all the physiological symptoms, such as the classic sensation of having butterflies in our stomachs, and of course, there's that kind-of-annoying-but-also-awesome feeling of always having them on our minds... even when we should be focused on something else. However, even if we're completely prepared for our emotions to take the next step, we don't always realize that what we're feeling for that special someone is "love" with a capital "L." And sometimes, it's because the signs of falling in love aren't what we'd expect.

Whether you're just letting it happen or actively trying to make a connection (and if you are, these 36 questions can really help you out), check out these strange signs that you might be falling hard for your beau. They might not be what you're likely to see in the next romance novel you read, but they definitely indicate that what you two have going might be the beginning of your own fairy tale.

Going on a romantic date or taking a trip to the local amusement park is almost always enjoyable, but what about when it's time to go renew your license at the DMV? Running errands might be dreadful when you're doing it on your own or with someone you feel pretty "meh" about, but when the the roots of love start to take hold, just about anything can be a blast as long as you're with the one you want.

Why did we never learn about this in high school biology? Researchers at UC Davis had 32 couples sit across from each other and stare into each other's eyes while their heart rates were measured. Interestingly, the couples' heart rates seemed to attempt to synchronize with each other. However, the same could not be said when the same experiment was performed using people who were not in romantic relationships with each other. So if you're curious as to whether or not your love is the real deal, hook yourselves up to some machines and see what science says.

3. Stuff That Normally Grosses You Out Is No Big Deal

A study from the University of Groningen has already suggested that we're less likely to be disgusted by disgusting things when we're sexually aroused, so it should come as no surprise that many of us are actually willing to put ourselves in gross situations when we're really in love with someone. Plenty of germophobes find themselves dealing with snot and vomit without a single complaint the first time their S.O. gets sick around them... and let's face it: even the smelliest farts aren't quite as repulsive when they come from the butthole of the person we're crazy for.

4. Literally Every Song You Hear Reminds You Of Them

Of course the romantic songs on the radio tend to remind you of the person you're currently romanticizing, but when "like" starts turning into "love," it's not just the sweet songs that make you think of your honey. The upbeat party songs make you think of how your heart dances when you're with them, and the breakup songs make you think about how sad you would be if you two were to ever be separated (which is totally never going to happen, but, you know... if).

They say that love hurts, but research has suggested that love actually makes things hurt a lot less. Researchers from Stanford University gathered up 15 college students, all of whom claimed to be "deeply in love" with someone, and placed a heated probe in the palms of their hands. They then tested their brains' pain responses while having the subjects look at a picture of an acquaintance, then at a picture of their loved one. The results showed that looking at a photo of their one true love reduced moderate pain by up to 40 percent, while severe pain was reduced up to 15 percent. The next time you get a headache, test the intensity of your love by staring at the object of your affection and see if it helps while you're waiting for the ibuprofen to kick in.

6. You Go Crazy Planning Your Future Together

I know some people—definitely not me— plan an entire life together with attractive strangers they see on the bus every morning, but when you fall in love for real, the prospect of actually having kids and growing old with someone isn't just a fun way to pass your commute—it's a very real possibility. Suddenly, you're lying awake at night wondering how your first name would sound with their last name, or if you'd even change your last name at all. You're doing punnet squares to figure out how your children would look. You're freaking out about the wedding that is years away from even being planned. Even though evolution would probably applaud your efforts for finding a suitable mate that could help you pass on your genes, it's still a little freaky when you realize that you might have really found the person you'll be spending the rest of your life with.

If love is the only drug you're on, I've got some good news for you: Researchers at Syracuse University have discovered that falling in love triggers the same euphoria that cocaine does. They learned that the same chemicals that are released by taking cocaine, such as dopamine, oxytocin, and vasopresson, are also released when we feel enamored with someone. Stay away from the synthetic stuff and stick with the feeling of being head over heels for someone you really care about.

But only if the other person says it's OK. In fact, you might even make them a sandwich using your dad's secret sandwich recipe or take them to that amazing sandwich place you always went to as you were growing up. Blame it on all the doting grandmas or just our inherent need to make sure the ones we love don't starve to death, but at one point or another, you and the subject of your own personal love story are going to be stuffing each other's faces with delicious foods.

9. You Don't Even Notice Other Attractive People

When you're just "in like," you'll probably still notice all the ridiculously sexy people that you pass by every day. Once your feelings progress to the next level, though, something akin to magic happens: all the hot people become invisible! Sure, there are people who are objectively attractive... I mean, maybe they'd be attractive to other people who aren't completely smitten with someone else already. But your desire to kiss, bang, or cuddle with anyone else basically disappears once you realize that you're already in love with the best-looking person on the planet.

10. You Start Developing The Same Interests

Even though it's normal (and healthy) to have your own separate passions in a relationship, you might discover that when you catch the love bug, you also start to enjoy the stuff your S.O. likes. And the best part is, it's not that pretend-enjoyment that we all do to some extent when we start seeing someone new ("Sure, I'd love to go to a smoke-filled bar and have to scream over the terrible music they blast at full volume until 3 a.m.!"). When you really start to fall for someone, the love you'll develop for your now-shared passions will be just as real and fulfilling as the love you develop for the person who introduced you to them.

More like this
The Best Time To Date After A Breakup, According To Experts
By Bustle Editors
20 Things You Should Never Tolerate In A Relationship
By Rachel Sanoff and Kathleen Ferraro
12 Ways You're Sabotaging Your Love Life
By Teresa Newsome and Lexi Inks
Virgo & Sagittarius Zodiac Compatibility, According To Astrologers
By Kristine Fellizar
Get Even More From Bustle — Sign Up For The Newsletter