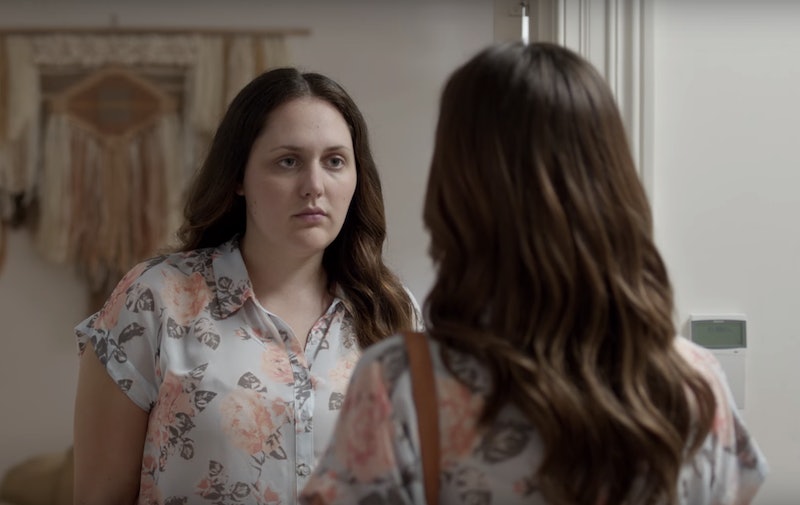 How many gazillions of years can we set feminism back in a mere minute? Well, friends, thanks to this fat-shaming sanitary pad commercial, we have a foolproof way to derail all progress our feminist role models have made in the past century in under ten seconds! The shockingly offensive ad for SOFY BeFresh menstrual pads is currently airing in Australia, and it's like watching a car crash that just keeps crashing forever. It starts with a woman staring into her mirror at her supposed "period counterpart" — only the person she sees in the mirror is several sizes larger than she is, and a borderline-psychotic mess who makes Gone Girl look like Goldilocks. And yeesh almighty, everyone, it only gets worse from there.

The period counterpart goes through a long and increasingly ridiculous montage wherein she insults her cat, pines for a man, entirely loses all self-awareness, threatens a pizza guy, and basically has the IQ, attention span, and temperance of a bratty three-year-old child. That's right — it's not enough that women are constantly under unfair scrutiny about menstruation in their personal lives, in their workplaces, and even in political forums. Now the people who are selling us the products for them can't stop themselves from massively insulting us.

All of that, though, is nothing compared to the unforgivable fat-shaming nature of this video. It is clear from the opening first few seconds that they are portraying this counterpart as "less desirable" before she even opens her mouth. They used an entirely separate woman — who is, by the way, beautiful at the weight that she is — and then juxtaposed her in a negative way with the skinnier, "desirable" counterpart. The idea that any body is more desirable than another body is messed up on so many levels, and the message deviates from menstruation so thoroughly that I honestly wonder if some fat-shaming group is secretly running the ad.

I get that they thought they were being "clever" by nodding to the weight that women temporarily gain on their period for normal biological reasons. But to take a woman who's slightly larger than another and portray her in this shaming way is not only grossly insulting and wrong, but also helping to perpetuate the very real societal pressure for women to conform to the standard that the original girl represents. Before any words are exchanged, before the product even hits the screen, SOFY has alienated an astronomical percentage of the very women they are trying to appeal to by insulting them for being themselves.

And then comes the icing on the poisonous cake. The way the ad represents women on their periods as imbalanced, stupid, subhuman creatures is some next-level offensive. Here are just a few of the things this period counterpart does:

Whining Incessantly And Irrationally About Men

I'm not even gonna scratch the surface on how aggressively heteronormative all of that is. But in other scenes, she's calling her boyfriend to break up with him, yelling at The Bachelor, and — you guessed it — whining about men some more.

Having A Ridiculous Existential Crisis

She can't get off the couch! She doesn't remember why she's standing in the middle of the room! She doesn't know why she's on the floor!! The uterine lining has sponged all of her brain cells up, LOLOLOL!!!

But only after she ate everything in sight and cried about it.

Listen, guys. I can actively tell you — not only as a person who has periods, but also a person who has periods so intense that I am current sitting on a plastic bag at work after my she-beast uterus bled through approximately four protective layers — that periods do not make you stupid. They do not make you crazy. They are annoying AF. But what's more annoying is any implication that they can somehow compromise our mental and/or emotional states.

And to anyone who tries to come at me with the "blah blah you can't take a joke" nonsense: Well, this isn't even funny. It's just b*tchy. I mean, look at this last scene:

Also, because I'm feeling cheap-shotty right now, the ad's YouTube description says: "Ugh. That feeling of general grossness when your pad isn’t quite doing it’s job. Say goodbye to blergh with SOFY® BeFresh™." "Blergh"?!?! Do not steal from feminist hero Liz Lemon for your fat-shaming, period-shaming agenda. DO NOT. Whatever bot human wrote that is clearly not doing its job, either. But hey, maybe they were just on their period!

Here's the full ad below, if you can stomach it:

More like this
34 Quotes That'll Inspire You On Juneteenth & Beyond
By Syeda Khaula Saad and Siena Gagliano
What Is A “Softboy?” The TikTok Term & Aesthetic, Explained
By Courtney Young
Why Are TikTokers Slapping Each Other With Tortillas?
By Courtney Young
Coastal Granddaughter Is The Latest Summer Aesthetic Going Viral
By Emma Garza
Get Even More From Bustle — Sign Up For The Newsletter