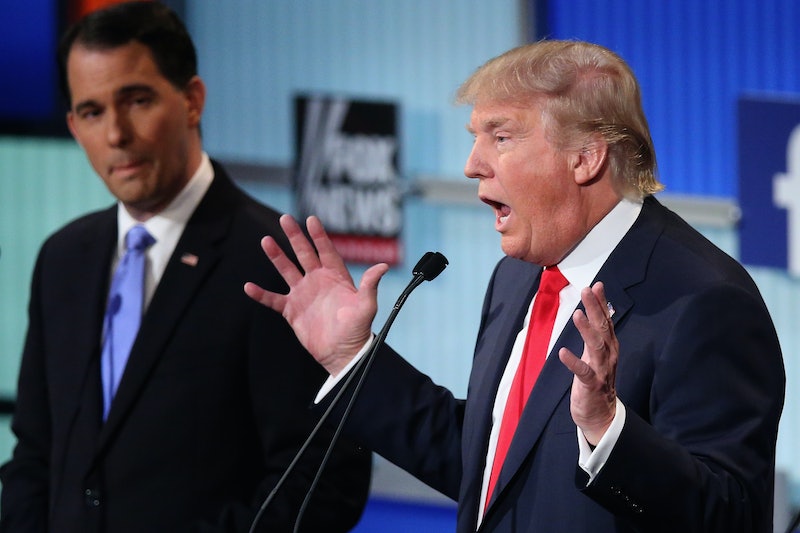 The Donald may not be backing out of the 2016 presidential race, but that doesn't mean that he isn't still facing a load of backlash for recent comments he made during and after the first GOP debate. The best response I've seen to it all so far, though — the #periodsarenotaninsult Twitter hashtag — is also the best response to Donald Trump's “blood” comment about Megyn Kelly anyone could have come up with. Ever. Why? Because it speaks the absolute truth. It's all there right in the hashtag itself: Periods are not an insult, and to use them as such? That's not something any decent human being should be doing, let alone a presidential hopeful.

First, a quick recap to set the scene: On Thursday, August 6 during the GOP debate, moderator Megyn Kelly challenged Trump over his abusive, sexist, and misogynistic language towards women. Trump slammed Kelly later in a phone interview with CNN, saying that she was “overrated” and that he didn't respect her; what really hit home, though, was how he described her moderation style: Said Trump, “You could see there was blood coming out of her eyes, blood coming out of her wherever.”

Although Trump later tried to clarify on Twitter that by “wherever,” he meant her nose, what the comment seemed to insinuate was that, as Bustle's Abby Johnston put it, Trump was “apparently unable to understand how a woman could ask him tough questions unless she was raging with hormones.” The comment was roundly condemned by just about everyone, including many of the other 2016 Republican candidates, and with good reason.

The bottom line is this: There is absolutely no reason to stigmatize menstruation or periods. They are not a punchline; they are not embarrassing; they are just a natural part of the way women's bodies function. Let's not forget what a period actually is and why it happens: The shedding of the uterine lining because an egg wasn't fertilized and no longer needs it. Periods are good things — they let us know what's going on inside our bodies.

And no, periods do not make women irrational, despite the longstanding myth saying that they do. They do not make us unable to function. Periods definitely don't affect our political views, as a recent study even determined (a study which, to be honest, I still can't believe even needed to be conducted in the first place). They are kind of like Hermione Granger, but they are certainly not an insult.

Which, of course, is exactly what #periodsarenotaninsult tackles head on. Created by Amber Gordon of the wonderfully inclusive online feminist community Femsplain, the campaign initially began without the hashtag. After Trump's “blood” comment, Gordon tweeted the simple sentence that would become the campaign's primary catchphrase:

And then it all kind of spun out from there:

The result is #periodsarenotaninsult and the accompanying website, also called Periods Are Not An Insult. And since then? Hoo boy. The ladies and lady supporters of Twitter have been coming out in full force, because, y'know, if Donald Trump is so interested in what we womenfolk do when we have our periods, then we may as will give him up-to-date information about our cycles as frequently as possible, right?

The Periods Are Not An Insult site itself comes equipped with three ready-made tweets suitable for any and all human beings who wish to let the Donald know exactly what's going on. For those who are currently on their period, there's this one:

For those who are about to start their period, there's this one:

And for those who either don't get periods anymore or never have gotten them, there's this one:

But just because those three options are readily available, that doesn't mean that people haven't been coming up with their own variations on the theme — and each one is more hilarious, thought-provoking, and/or poingnant (often all at the same time) than the last:

Hey, @realDonaldTrump — I don't get a period anymore as a side effect of having an IUD, but guess what? Periods are not an insult. Period.