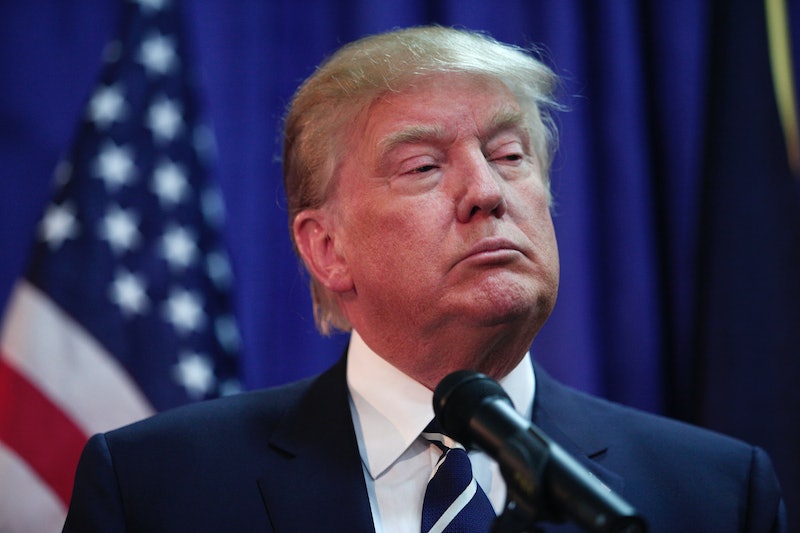 If there's one thing you can say about Donald Trump in the 2016 race for president, it's that he's consistent. From his larger-than-life campaign announcement to his helicopter arrival at the Iowa State Fair, Trump has offered voters a dependable mix of brash statements, wild insults, and weird conclusions. At this point, we know that we can count on any Donald Trump interview to deliver media catnip: a bit of bravado, a bit of misogyny, and a scoop of crazy. And this week's latest scoop of crazy came in the form of a TIME interview, which contains insane quotes and a jaw-dropping photo of Trump posing with a bald eagle.

First, you have to take in that photo. The presidential candidate sits at his desk in front of a stunning view of Manhattan. In another corner sits a display of trophies, signed sports memorabilia, and autographs collected as he built his great fortune. He's giving the camera a look that award-winning photographer Martin Schoeller, who took the photo, called "Blue Steel." And perched to his left is the true star of the scene: a 27-year old bald eagle named Uncle Sam. The title of the picture? "The Donald Has Landed." Indeed.

In vintage Trump style, during his interview with TIME's Michael Scherer, the Republican frontrunner flitted between policy topics, offering little in the way of detail or substantive plans. It's peppered with Trump's usual insults of his fellow Republican candidates, slams against Hillary and Bill Clinton, and an overall disdain for the "big guys" and the "bad guys" that he believes are keeping the country from "winning." Here are seven of the weirdest — though entirely Trump-esque — moments from the interview.

When He Called The Other Candidates Inauthentic "Puppets"

"I don’t think the people running for office are real. They have to throw a lot of consultants away and be themselves. I think it is one of the things that has helped me." Trump has fired several senior-level campaign advisers in recent weeks, and he refuses to hire a pollster or run ad campaigns.

When He Doubled Down On His Plan To Fix Immigration

Donald Trump's immigration plan is simple: Force Mexico to pay for a 1,000-foot wall, and deport undocumented immigrants. He doubled down on that plan in the interview:

A career businessman, Trump dismissed the idea of hiring consultants to brief him on domestic or foreign policy. Chiding Jeb Bush for spending "all day talking with a general" to shape his policy approach, Trump revealed a very different strategy to policy briefings:

I watch on television and I watch in TIME Magazine, and I watch in the New York Times and the Wall Street Journal — I read all of them, a lot. And I get my views from the media [...] The views that you will see during those 10- or 15-minute segments or during reading a story are not a lot different than Jeb sitting around with a policy group — if he has such a thing.

When He Criticized Hillary Clinton

And Then When He Attacked Bill Clinton

In a sidebar that only proved that no Clinton is safe under Trump's eye, Trump told TIME that the Monica Lewinsky scandal doomed an otherwise lackluster Clinton presidency: "It was a disaster and a huge distraction."

When He Talked About Taxes

The multi-billionaire real estate tycoon complained that the current tax system is too complicated for middle-class Americans. His policy solution as president, however, seemed to hinge on attacking another private business:

When He Called The Other Candidates ... Well, Criminals

Trump accused the other candidates — from Jeb Bush to Hillary Clinton — of having illegal ties to the people in charge of their political action committees:

They all have their friends running the PACs. They're all breaking the law, in my opinion [...] The people that set up PACs are all talking! They put their best friends in there, they put people — lawyers — they put all sorts of people in there that are friendly to them. Well, that's not supposed to happen.

According to the TIME report, Trump offered no real solution to addressing corruption in the political process, other than to call for more transparency. As with all of the crazy statements Trump made in that interview (and in others), the reader is left to draw his or her own conclusions on what the Republican candidate's real plan might be.