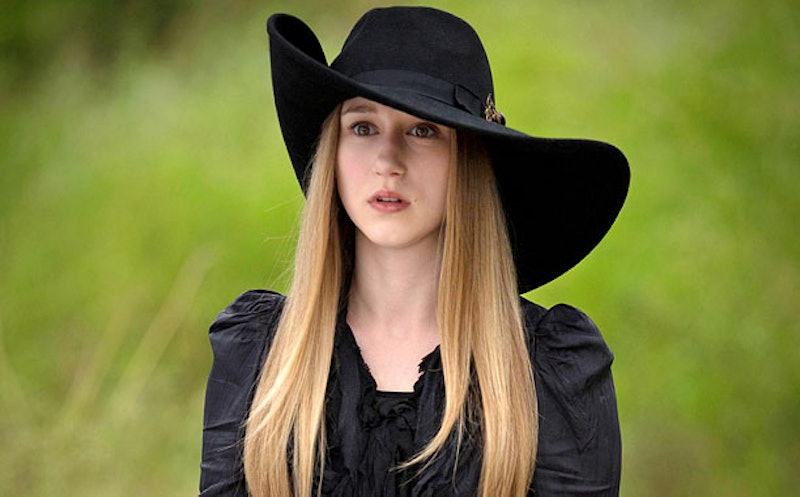 Last American Horror Story fans saw of Taissa Farmiga, she was welcoming a new group of witches to the Coven, having been revived by Cordelia and anointed Council of Witchcraft. It was an eerie end to a disturbing season, even by AHS standards — and Farmiga, as the powerful, murderous Zoe, brought the creepiness to a whole new level. So it was a disappointment when, a few months later, she didn't return for Season 4 of the series, Freak Show, and even more so when her name wasn't on the roster for Season 5, the upcoming AHS: Hotel . So does that mean Farmiga is officially done with Ryan Murphy's terrifying anthology?

Perhaps not. "I think it's still up in the air," says Farmiga, speaking with Bustle. "You never know. I would totally pop back in and say hi for a minute."

It may not be an official confirmation, but in the TV world, even a possibility of an actor's return is enough reason for celebration. So AHS fans, look out — Farmiga could be back on the FX show before long. That is, if she has the time; right now, Farmiga's plate is totally filled, thanks to several movie roles (including 6 Years , out now, and The Final Girls, out Oct. 9), and a new TV show, Wicked City . The ABC crime drama, set for release this fall, follows a pair of LAPD detectives on the hunt for serial killers terrorizing the area. Farmiga plays Karen, an aspiring journalist working with a crime scene paparazzo.

"What I love about Karen is she’s a little bit older and a little bit more mature than any of the other characters I’ve played," says Farmiga, who recently turned 21. "It’s nice to play someone closer to my age, because I understand what she’s going through."

Karen, the actress says, "goes through a lot of transformation" throughout the series; a writer with a dream of being a major journalist she moves to L.A. to follow her dreams, taking a paparazzi job as her "first step on the ladder."

"She’s the kind of girl that’s going to do whatever it takes to get there," says Farmiga. "She wants to work at Rolling Stone, and she’s gonna. She’s gonna put herself in whatever situation she has to to get there."

It may not be the horrifying drama of AHS, but it does sound insanely creepy — in other words, right up Farmiga's alley. Wicked City, also starring Erika Christensen, Ed Westwick, and Jeremy Sisto, premieres on Oct. 27, on ABC; be sure to check this one out.