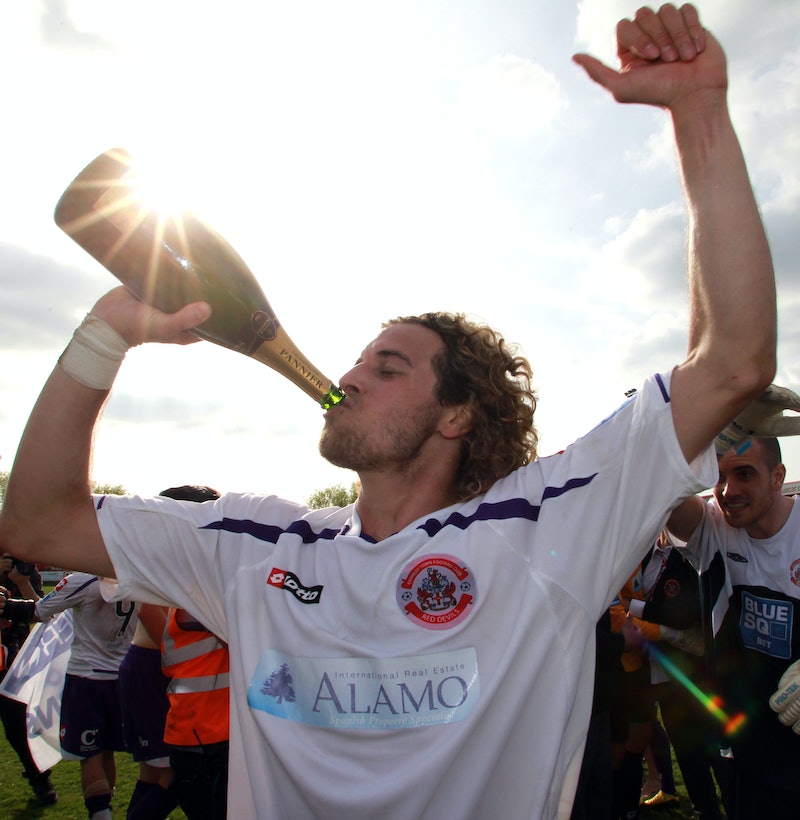 Hey guys, wine is not just for the ladies! Men may want to guzzle up more reds and whites after hearing this news: Drinking wine makes sperm stronger. According to a new study, the average modern man has some sperm problems, what with the heavy caffeine intake, tight-fitting boxer briefs (bummer), and being stressed out ALL THE TIME like the rest of us. Has your man had a cellphone for more than 10 years? His sperm are probably weaker because of that as well. Great. But never fear, because wine is here! In the study, Polish researchers found that drinking two glasses of wine for three days every week may help men's little swimmers do more laps — so don't go chugging it all right at once.

Making a baby? Well, light some candles and pop open a bottle or two before you do the deed. Show your lady that romantic side, and you might get lucky. Not making a baby? You have my permission to drink wine anyway.

We all love new studies that reveal what we are doing wrong with our lives. And my goodness, there have been some doozies dealing with food and drink studies this week. Check them out:

Do you take photos of your food and then post them to Instagram? I'd normally tell you to stop being a pretentious [insert noun of choice here], but you may get a reprieve if you're looking to shed some pounds. According to a new study from Brigham Young University, looking at photos of food — in this case, salty ones like chips — may actually decrease the likelihood of eating that same food later on. “It can have the impact like they have consumed it already, and it may decrease the excitement of it when they go to eat it,” nutritionist Joan Salge Blake says. Reprieve retracted if you use the Toaster filter though, because that is just inexcusable.

Want to Live Longer? Drink Up.

Studies continue to prove that alcohol — when consumed properly — is actually good for you. Again, everything in moderation: Researchers found that adults who imbibe in one to three drinks per day tend to live longer than those who don't drink at all. And this most recent study was by no means a small undertaking: University of Texas researchers followed nearly 2,000 participants over 20 years. By the time subjects reached their 50s and 60s, 69 percent of the teetotalers had already died, compared to only 41 percent of moderate drinkers.

Are Frozen Veggies Better For You?

Stock up on the Steamfresh. Even though nothing beats crisp, just-picked vegetables, frozen veggies may actually have more vitamins and minerals than store-bought ones. A new study out of the University of Georgia studied nutrient values of eight different types of frozen and fresh veggies that were stored in family homes for five days. The frozen produce retains its vitamins for a longer amount of time, thus making it a healthier alternative.

It's common knowledge that when a woman is pregnant, she's eating for two — she has to monitor what she eats and drinks for the baby's sake. But a new study suggests that dads may have to watch what they eat as well. Researchers at McGill University found that when male mice were fed a diet lacking in folate — which is essential for women during pregnancy — their offspring were born with a higher rate of birth defects.

These findings may ring true for humans as well, warning fathers-to-be to watch their diets and lifestyle. “Despite the fact that folic acid is now added to a variety of foods, fathers who are eating high-fat, fast-food diets or who are obese may not be able to use or metabolize folate in the same way as those with adequate levels of the vitamin,” lead researcher Sarah Kimmins says.

Water Has Drugs. A Lot of Them.

Gulp. Here's a bit of nerve-wracking news. Even though our treated water contains many forms of bacteria, strict water regulations keep Americans safe — for the most part. But now some sobering information has just come up: There are tons of drugs in our water supply, the likes of which surprised many drug companies. The influx of drugs is due to our reliance on prescriptions: People release them after going to the bathroom or flush old drugs down the toilet to dispose of them — but no one seems to be regulating their amounts.

“We’re not trying to scare anyone, but we need to know what these chemical compounds will do to the environment and what are the long-term effects for humans. No one seems to know,” says Nick Schroeck, executive director of the Great Lakes Environmental Law Center in Detroit. The full study is set to be released in January. If you don't have one, maybe now is the time to buy a water filter.

A Warm House Can Burn Calories

Turn up the thermostat, stat! People who live in a comfortable 73 degrees tend to have lower body-mass indexes than those who keep the heat down. While brown fat, which is "fat that burns fat," works its magic in chilly rooms (below 60 degrees), most people don't keep their own homes at that temperature in the winter. People also use more energy and eat less in houses that are set at 73 degrees. The English study surveyed 100,000 people for 13 years. If all else fails, just blame the extra pounds on your (probably) freezing office.