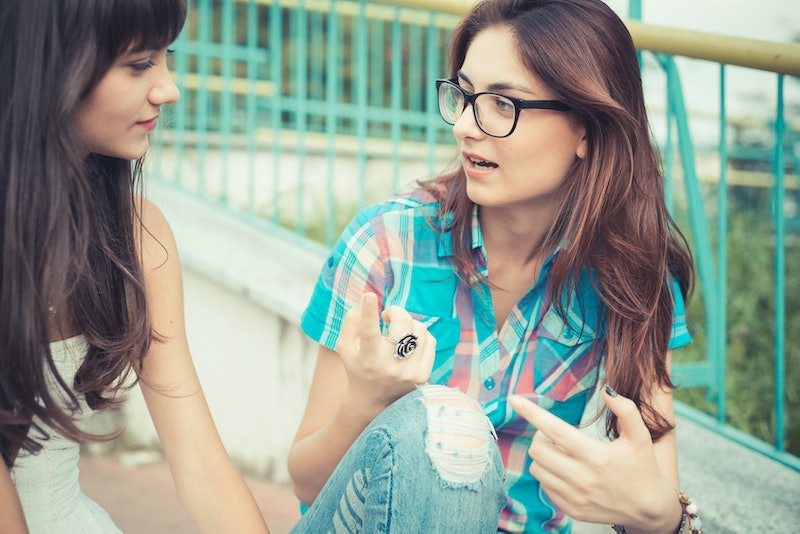 If you have never experienced abuse yourself (and I hope you never have and never will), it is devastatingly likely that someone you know and love has experienced it, is currently experiencing it, or will experience it. We need to understand how to help each other in a world that frequently does not care about women's health and safety. So how can you help a friend in an abusive relationship?

One in four women and one in seven men will suffer from intimate partner violence at some point in their lives. Every year, 1.3 million women become survivors of domestic violence. This horrifying violence is intimate, yet its prevalence, as well as our society's reluctance to hold abusers accountable, means that these assaults permeate our entire culture. Unfortunately, even if you swear that you have the greatest intentions, you may not really know how to talk to a survivor of abuse when you are trying to help her. That's not necessarily all your fault — we are taught to blame victims (especially if the victim is a woman) and we are taught to assume survivors are dramatic liars.

We lack any mandated comprehensive sex ed in our high schools, so young people aren't learning about dating or relationship violence. It is, sadly, our responsibility to educate ourselves about the kinds of things to never say to friends in abusive relationships, especially if our ultimate goal is to help.

One of the first things that you can do to better help a loved one in an abusive relationship is become aware of the many different forms of abuse; not all of them come with obvious bruises. Your friend could be suffering from physical, verbal, or emotional abuse. Helping someone escape an abusive relationship is no easy task. There is no way that you can know exactly what to do, so take advantage of resources that can help both your friend and yourself.

Whatever you do, just don't say anything like this:

Hopefully you've never been in abusive relationship, so you might not be familiar with the manipulation, fear, and danger experienced by those who have survived it and those who are currently living it. The Office on Women's Health from the US Dept of Health and Human Services says, "Your friend may decide to stay in the relationship, or she may leave and then go back many times. It may be hard for you to understand, but people stay in abusive relationships for many reasons. Be supportive, no matter what your friend decides to do." In fact, research shows that, on average, a woman will leave an abuser seven times before she breaks off the relationship for good.

To provide more insight into why comments like "Just leave" are incredibly uncaring and asinine, let's take a look at the Twitter hashtag #WhyIStayed, which emerged following victim-blaming reactions by the media to the footage of Ray Rice knocking his fiancee (now wife), Janay Rice, unconscious in an elevator. Sportscasters and reporters placed the responsibility on Janay, claiming she was clearly aware of her fiance's behavior, so how could she have gone on to marry him.

Tired of the media promoting these narratives, Beverly Gooden, a writer, "called on her [Twitter] followers to share their stories of domestic abuse with the hashtag #WhyIStayed in an effort to draw awareness to the complexities of domestic violence." The hashtag quickly went viral, and women shared memories of their partners physically preventing them from being able to leave, telling them that they were overreacting, telling them that they deserved it — the devastating list continues. Statements like "just leave" minimize the very real fear, threats, and manipulation faced by survivors.

In fact, according to the Domestic Abuse Shelter of the Florida Keys, "Approximately 75 percent of women who are killed by their batterers are murdered when they attempt to leave or after they have left an abusive relationship." So consider that horrific detail before asking someone why they can't just leave. That question also ignores the financial dependence that women may have on their partners for shelter, food, transportation, and childcare.Of course, you want to support your friend, but you have to do it an empathetic, kind way that's actually helpful. The Office on Women's Health website states, "Don't say, 'You just need to leave.' Say something like: 'I get scared thinking about what might happen to you.' Tell her you understand that her situation is very difficult." Additionally, it recommends providing concrete, specific details to help your friend — offer her a place to stay, be her ride, look up phone numbers of women's shelters, etc.

2. "How Could You Have Let This Happen?"

Michelle Kiminsky, a Brooklyn lawyer and chief of the District Attorney's Domestic Violence Bureau, told Cosmopolitan, "[An abusive partner] is probably not abusive at every moment of the day. There's a tendency in domestic violence to look at the victims as an 'other.' We've all been in relationships that are good, and we've all been in relationships that are bad, and you might have a friend who says, 'He's a jerk,' but he's not a jerk to you all the time. It's easier to judge why other people stay in a relationship than to understand that human relationships are complex, and for the people in abusive ones, the abuse is not necessarily what defines the relationship." Just because abuse is clear to you as an outside party doesn't mean that it's clear to the person actually in the relationship.

Often, abusive behavior doesn't reveal itself immediately — allowing a partner to fall in love before things suddenly take a turn for the worst. This makes it even more confusing and heartbreaking; how can you reconcile that the love of your life is also trying to hurt you? So before you place blame on your friend and wonder aloud, "How could you have let this happen?," think about the overwhelming statistics. It's a terrifying truth that this could happen to you. The question isn't, "How could you have let this happen?" The question is, "What is wrong with our society that it is so common for women to be abused by their partners?"

3. "I Can't Imagine They Did That. Are You Sure You're Not Just Sensitive?"

We often become good friends with our friends' partners. Sometimes, we may have even introduced the two of them to each other. As well as you think you may know your friend's partner, you'll never know what goes on when it is just the two of them. It is no easy feat for your friend to share such a personal struggle, so if she trusts you enough to confide in you, then take her seriously. Believe her. Don't disregard her pain and safety simply because you don't want to picture their partner being abusive. If you have difficulty recognizing the abuse as an outside party, imagine the exhausting introspection and reflection required of your friend — the person actually in the relationship. Believe her. Trust her. We already know how much our society doesn't believe women; you need to listen to her truth when no one else will.

Abuse is always that bad. Don't downplay it just because you're uncomfortable and would rather pretend it isn't happening. Don't minimize it just because you've never suffered abuse. You must be empathetic and imagine a lived experience different from your own.

Nothing ever justifies emotional, verbal, or physical abuse. This is the same thing as telling a rape survivor that her short skirt meant she was "asking for it." It's victim-blaming, and this question should never leave your mouth.