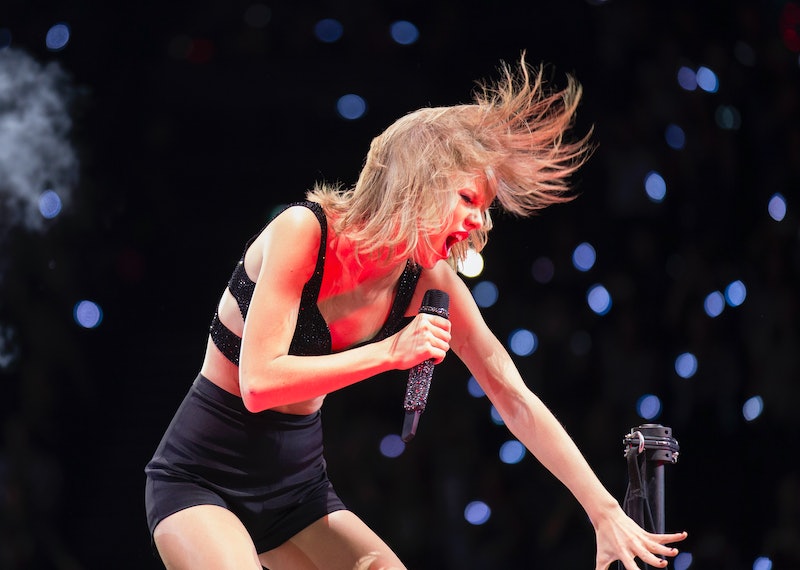 In honor of Throwback Thursday this week, Taylor Swift posted a photo to Instagram showing an early concert of hers that — unlike her current shows — seemed to be missing something rather important: audience members. Within the caption, Swift marveled at the fact that now, just a few years later, she's set to play five sold-out shows at the Staples Center in Los Angeles. Oh, how the times have changed!

In addition to making me feel extremely old — since I'm 27 while Swift's 25, and I don't have even a fraction of the success she enjoys — her #TBT got me thinking about what else was true back in the days she was playing shows in empty venues. Today, it's difficult to imagine a world where people wouldn't sell their most valuable possessions for a front row ticket to the 1989 tour — but back then, it looks like anyone could just walk right up to the stage and all but give her a high five during a set (as long as they reached over the single plastic banner with just her name on it, of course). I can't even fathom it.

Swift didn't put a date on the photo, but using my pop culture detective skills, I'm placing it sometime between 2004 and 2007, when she was just getting her start, but before she'd made it really big. And just to give you an idea of how much the world has changed not just for Swift, but for all of us since then, here are 12 forgotten truths from back before Swift started playing sold-out shows at major arenas.

1. Your Phones Used To Be Just For Making Calls

No iPhones existed until 2007, which means before then, we were all still printing out MapQuest directions or — gasp! — using real maps to find out way around.

2. We Still Had More Harry Potter Books To Look Forward To

Because Harry Potter and the Deathly Hallows came out in 2007, on the day my heart sang and died in the same moment.

3. Blockbuster Was Still In Business

Those were the days, right? (JK, love you forever, Netflix.) But seriously, R.I.P.

4. Pluto Was Still A Planet

5. We Still Had A Healthy Economy, LOL

He didn't take home the additional eight until the Beijing Olympics in Summer 2008.

Facebook launched in 2004, Twitter was two years behind it in 2006, and Instagram was four years behind that in 2010. So I guess we...sent up smoke signals to tell people what we had for brunch?! I don't remember.

He didn't jump on the couch until 2005! Up until that moment, he was still just a handsome leading man!

9. There Was No Brangelina

On account of Brad Pitt and Angelina Jolie didn't even know each other until they met in 2004 on the set of Mr. & Mrs. Smith. In fact, Pitt was still married to Jennifer Aniston!

10. Beyoncé Was Still Just The Most Famous Member Of Destiny's Child

We weren't ready for the world domination that followed their breakup in 2005.

11. We Hadn't Met Kristen Wiig Yet

She made her debut on Saturday Night Live in 2005, and nothing has been the same since.

12. Leonardo DiCaprio Didn't Have An Oscar Yet

Oh wait, sorry — this one is still true. My bad.

Hard to believe that these things were all true just 10 or so years ago, but you know what they say — time flies when Swift is getting famous!

More like this
Taylor Swift's “Carolina” Theme For 'Where The Crawdads Sing' Soundtrack Is Here
By Jake Viswanath
Sadie Sink Would Escape Vecna From 'Stranger Things' With This Taylor Swift Song
By Grace Wehniainen
'The Summer I Turned Pretty' Using “Cruel Summer” Has Twitter Begging Taylor Swift To Release A Music Video
By Radhika Menon
Here’s How Lizzo Is Supporting Abortion Rights After The Roe v. Wade Reversal
By Brad Witter
Get Even More From Bustle — Sign Up For The Newsletter