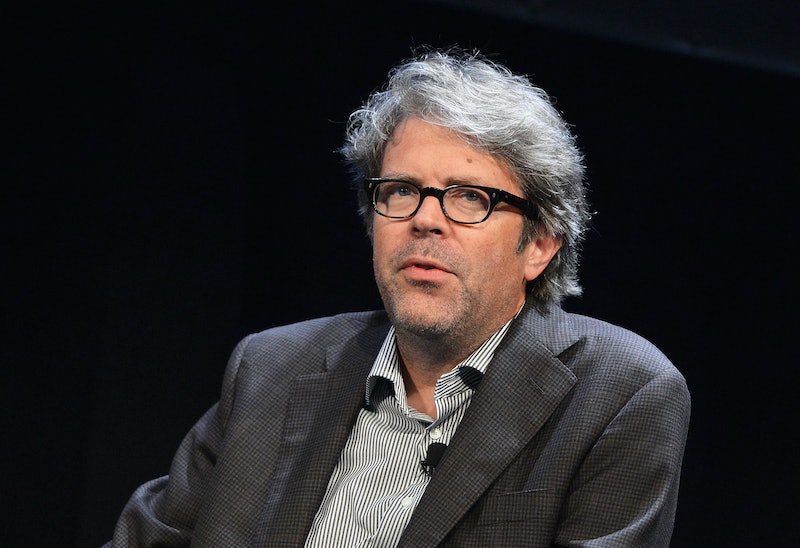 As booksellers, libraries, and fans brace themselves for the release of the highly anticipated new novel, Purity, the Internet is astir with questions about the author and his outlook. On Friday, a Jonathan Franzen Guardian interview featured a comment from the novelist indicating that he had once planned to adopt an Iraqi war orphan in order to help him "figure out young people." Now, Twitter is trying to figure out whether Franzen is even a real person. Because seriously... what?

Thankfully, Franzen says he and his partner, Kathryn Chetkovich, ditched the idea after "maybe six weeks," thanks to suggestions from his New Yorker editor, Henry Finder, who encouraged the author to meet with recent graduates instead. Following Finder's advice, Franzen says, "cured me of my anger at young people."

You might be wondering why the bestselling novelist was angry with younger folks in the first place. As it turns out, Franzen was acutely aware of the generation gap between Baby Boomers and the young Gen-X/old Millennial crowd born in the late 1970s and early '80s. This awareness, however, manifested itself as anger toward youths for being "politically not the way they should be as young people." Franzen says, "I thought people were supposed to be idealistic and angry. And they seemed kind of cynical and not very angry. At least not in any way that was accessible to me."

What's obvious from his comments, and appears to be completely lost on Franzen, is that his alienation from the younger generation isn't unique. His words sound exactly like what a fortysomething person says when confronted with the fact that they are no longer hep to the jive. There's no need to adopt a child when you're speaking in dad-isms already, Mr. Franzen.

Adopting a child to find out how they work is like cutting off Stretch Armstrong's legs when curiosity finally got the better of you. What's more amazing is that Franzen, an ostensibly intelligent man, thinks this is somehow normal or acceptable. This is only the latest in a series of tone-deaf comments from the novelist. Saying you're going to adopt a child of color from a war-torn country — not out of any concern for the child, but just because you want to understand what makes him tick — and then acting like that's not outrageous is the epitome of privileged reasoning, and it's what is making Franzen unfathomable to the Twitterverse today.

Franzen's longtime feud-partner, Jennifer Weiner, waded into the fray with a 10-point response to the Purity author's comments regarding accusations of sexism. In his Guardian interview, Franzen stated his firmly held belief that he is not a sexist, just a scapegoat for feminist critics who target him because "a villain is needed." This coming from the man who thinks all feminists make their husbands sit down to urinate, and that being "a white guy made [interacting with Oprah] harder."

I wish I could make this stuff up, but, unfortunately, I'm not Jonathan Franzen.

Regarding Franzen's adoption comments, it's possible that not even the Franzenites can amass a legitimate defense; "satire" can cover a multitude of asinine statements, but not every one. Of course, there's the looming question of what effect Franzen's admissions, and the public's ensuing reaction, will have on sales when Purity comes out on September 1.

Purity was already destined to be a bestseller, and the attention laid on Franzen's Guardian interview will, for better or for worse, drive more people to pick it up, if for no other reason than to see what all the fuss is about. However, while Franzen's misogyny has been the subject of previous criticism, this incident may finally clear a path for mainstream print publications — perhaps even those that unabashedly lauded The Corrections and Freedom — to run feminist and cultural criticisms of the novelist's work. Whether or not Franzen feels unjustly vilified, Weiner sums feminists' position up perfectly:

More like this
Prince Harry Incorrectly Recites Christina Aguilera’s “Genie In A Bottle” Lyrics
By Jake Viswanath
I Read Prince Harry's 'Spare' So You Don’t Have To: 11 Highlights To Know
By Marina Watts
Twitter Is Identifying With Sally Field & Jane Fonda’s Friendship In New Viral Video
By Jake Viswanath
'Mayfair Witches' Already Changed 2 Major Characters From The Books
By Grace Wehniainen
Get Even More From Bustle — Sign Up For The Newsletter
From hair trends to relationship advice, our daily newsletter has everything you need to sound like a person who’s on TikTok, even if you aren’t.